Jersey Shore: Family Vacation may be taking a hiatus so they can film another two days' worth of footage and turn it into another half a season, but that doesn't mean that Jersey Shore fans will have nothing to do on Jerzdays, comrades. In fact, they'll have even more to do (in addition to gym, tanning, and laundry), because new seasons of Double Shot at Love and Floribama Shore premiered this week. You can read my glorious review of Double Shot at Love here, but let's talk about the return of Jersey Shore's younger and still salacious cousin, Floribama Shore.

Greetings, comrades! It is I, your El Presidente, and Floribama Shore Season 4 Episode 14, titled Welcome to the Peach House, picked up right where the mid-season finale left off, with the cast in quarantine in Arizona. Spoiler alert: it sucked. Yeah, tell me about it! If I didn't have enormous wealth, dozens of armed guards in my luxurious palace, and an entire nation of citizens whose only desire — as required by law — is to please their El Presidente, then I don't know what I would have done during this pandemic! Haw haw haw haw!

After getting that out of the way, Floribama Shore fast-forwarded a few months. Nilsa is more pregnant than ever. She also has a dog, which she brought with her to the luxury vacation cabin in Georgia. Aimee, who had to dump her boyfriend from the first half of the season because she believes he went back to meth, has a new pet pig, Princess Goddess Piggy Tutor May Massengill Codi Hall Johnson, which she brought to the cabin. Candace brought a new hairstyle, while Jeremiah brought a band new vow to avoid drama with Gus this vacation (and the same shirt he's worn in every past season of the show). Kirk and Codi… well, they didn't bring anything new. But it's Gus who brought the greatest gift of all, pulling up to the house on a motorcycle dressed exactly like Uncle Jesse on Full House.

Gus swears that this vacation, he isn't going to start drama with the other castmates. Jeremiah claims he can never trust Gus again, but he was friendly with him when he pulled up on the bike. How can you hate a guy who looks like this, though?

Yes, this is going to be a fun season, comrades. Of course, this episode did little more than get all of the cast members in one place, ending shortly after they'd all arrived. But the teaser for the episodes to come promises everything you love about the show: drunken revelry, literal car crashes, men crying, women crying, Codi awkwardly hitting on Candace, Candace yelling, Aimee yelling, Jeremiah yelling, and at least one person threatening to leave. 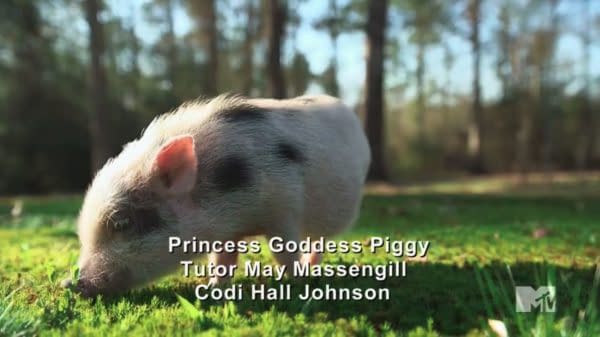 Review by El Presidente
7/10
The mid-season premiere offered Floribama Shore fans a reset after the first half was cut off by a COVID scare and quarantine, as the cast traveled to Georgia for another try at a wild and drunken vacation. Floribama Shore offers the kind of hormone-fueled drama that only youth and copious amounts of alcohol can provide, and its return is very welcome.

This week's episode of Double Shot at Love on MTV featured increased drama as the battle for Jersey Shore star Vinny's heart intensified.

WWE Crown Jewel airs at noon Eastern on Thursday, October 21st. Here's the full match card and how you can watch the show, comrades.

For the Crown Jewel go-home episode of WWE Raw, WWE has booked a women's title match, King of the Ring and Queen's Crown semi-finals, and more.

The AEW World Title Eliminator Tournament will kick off on Rampage on Friday, with the finals set for Full Gear in November and the winner getting a title shot.

Jeremiah celebrated his birthday on this week's episode of Floribama Shore, but it was a pair of goats who had the most exciting adventure.

Angelina guest starred on this week's episode of Double Shot at Love, and she delivered the drama as promised.

With Doctor Who: Flux kicking off on October 31st, the BBC released a new set of preview images of Yaz, Dan, and Series 13's guest stars.

So what do you get when you cross Saturday Night Live host Jason Sudeikis' Ted Lasso with Matt Reeves' Robert Pattinson-starring The Batman?

In the following preview for AMC's The Walking Dead: World Beyond, Iris and Hope disagree on the best way to move forward against CRM.

Watchmen and Jessica Jones are just two of the five streaming & premium cable TV series that made our list of soundtracks worth a listen.

Inside Job star Brett Gelman talks psychic mushrooms, his love of Danny DeVito, and if Hollywood is really in on the world's conspiracies.