¡Hola, mi amigos! It is I, your El Presidente, the greatest authoritarian dictator the world has ever seen and if I do say so myself, a fine reviewer of the best trashy reality television. Today, comrades, it is my mission to tell you about all the drama that happened on this week's episode of MTV's Floribama Shore. Floribama Shore Season 4 Episode 23 "Family Reunion" aired on MTV on Jerzday, and let me tell you, everything went straight to hell this episode. No, I don't mean because there was a ton of drama… I mean the opposite! This episode of the show was so wholesome and drama-free, it might have ruined Floribama Shore forever!

Things started to go wrong as the roommates continued their Yardi Gras celebration from last week's episode. As you know, Kirk's friends were visiting from Atlanta, including two women (both named Tori) with the hots for Gus. But Gus was struggling with his desire not to cheat on his girlfriend back home as he launched in the hot tub with both Toris by his side.

Everyone expected Gus to have sex with one or both Toris this episode, but in a shocking twist, Gus remained faithful. First, Brunette Tori pulled Gus outside for an attempted makeout session, but Gus explained he had a girlfriend and let her down gently. Spending time outside with Brunette Tori caused Blond Tori to become extremely jealous, so she pulled Gus into a bedroom and threw herself at him, brushing off his attempts to stay faithful by literally jumping on top of him. But Gus still would not relent, and both Toris were sent home with a major case of blue balls! Er… blue ovaries.

Who are you, and what have you done with the real Gus?! No, that's a serious question. I can't tell you how many times the American CIA has attempted to kidnap my protege, Maduro, and replace him with a robot imposter designed to spy on me, but I can always tell the difference, comrades, because Maduro has a cute little birthmark in the shape of Stalin's head on his left buttcheek. Haw haw haw haw! Crap, I should not have revealed that publicly.

As if Gus refusing to behave like the scumbag we all know and love (to hate) wasn't bad enough, comrades, the rest of the episode saw the pregnant Nilsa return and the roommates' families come for a visit. Nothing is more wholesome than a visit from Codi's parents, the Buttses… except for a simultaneous visit from Candace's parents, with Candace's mom's thirst for Jeremiah and the dads' hope that their children will finally get married to each other.

Everything was quickly heading down the tubes when, in a last-minute hail mary, Gus's sister arrived on the scene. Last half-season, when Gus ran away from the Montanna vacation rental after an argument with Candace, his sister threatened to fight Candace. Now that they were finally in the same place at the same time, los producers made their best effort to make it seem like a physical altercation was imminent as the show ended on a cliffhanger, but you could tell by the way Gus's sister was acting that she planned to apologize to Candace as soon as next episode begins.

With no drama to speak of and no future drama on the horizon, the rest of this season could end up being a total waste! Heck, even Jeremiah began to soften his stance on Gus this episode, admitting that there could be a chance they could rekindle their bromance. This sort of lovey-dovey hippie crap is not why I watch reality television, comrades! I want drama! I want fighting! I want Gus to contract multiple sexually transmitted diseases! I want somebody to get arrested! But alas, comrades, I cannot force any of those things to happen. Well, unless I had the case kidnapped and brought to my dungeons, but then there would be an "international incident" and the Americans would once again accuse me of "human rights violations," and nobody wants to deal with that around the holidays. 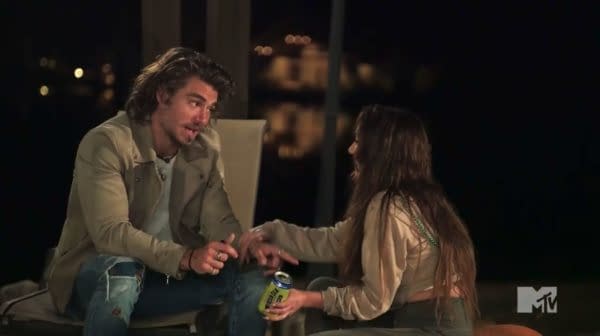 Review by El Presidente
3/10
With no drama to speak of and no future drama on the horizon, the rest of this season of MTV's Floribama Shore could end up being a total waste! Heck, even Jeremiah began to soften his stance on Gus this episode, admitting that there could be a chance they could rekindle their bromance.