The title of the fourth episode in the first season of Head of the Class is, unsurprisingly, yet another dad joke, with "The Stare-Master" alluding to the arc between Miles (Adrian Matthew Escalona) and Principal Maris (Christa Miller). In this case, the latter decides to take the former under her wing to exert his physically intimidating presence through facial expression and body language. The episode is far more about transparency but I'm guessing that showrunner Bill Lawrence and director Randall Winston couldn't think of a more proper title. At the very least given the title, they could have had Suzanne Somers guest star. I bet she was just "a knock on the door" away.

The main arcs are more about Alicia (Isabella Gomez) and a few of her students meddling with her colleague Elliot's (Jorge Diaz) dating life believing he's way too open on his online profile without leaving anything to mystery for prospective partners. The other centers on Luke (Gavin Lewis) growing neurotic after Makayla (Jolie Hoang-Rappaport) stands him up for a study session. Lewis and Hoang-Rappaport do a commendable job playing off each other's insecurities and overly competitive nature going through the motions throughout the episode.

Despite their mutual interests, I found it kind of awkward how Alicia punches down on Elliot's openness about his passions, as if having certain nerdy interests is still somehow frowned upon in 2021? Perhaps Winston and writers Steven Cragg & Brian Bradley felt the need to borrow from their rom-com cliché tree when it came to having Alicia put on her matchmaking hat despite the series never really addressing her own love life (in a hypocritical way)). It's kind of a head-scratcher for sure but okay, maybe we're supposed to believe she's a "Jill-of-all-trades" regardless of her actual experiences.

Aside from those two arcs, it was at best pretty average compared to previous efforts. I appreciated the minimalist approach that Miller had with Escalona during their scenes together. And it was nice to see Miles picking up on the meaning of the issues at hand quicker than he did with social issue themes in previous episodes. It shows a progression in his character and speaks well of Escalona's performance. Head of the Class is currently streaming on HBO Max.

Head of the Class: Season 1 Episode 4 "The Stare-Master" 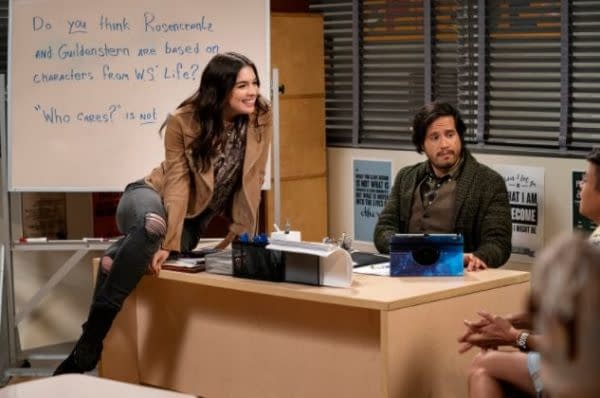 Review by Tom Chang
5/10
There's nothing really spectacular about this episode of HBO Max's Head of the Class that you haven't seen before on the show or you haven't seen in dozens of sitcoms before it. It certainly feels like it's an episode you can skip and not miss anything, but at least Christa Miller is a joy as a Jedi Master of sass at work.
Credits
Director
Randall Winston