In the third episode of HBO Max's Head of the Class, the focus shifts to a musical that Elliot (Jorge Diaz) wrote, as auditions get underway for his sci-fi themed "As the World Sa-Turns" (in the most dad-joke-inspired title for an episode). Still trying to live out her youth vicariously through her students a little too much, Alicia (Isabella Gomez) tries to convince Miles (Adrian Matthew Escala) to audition as the co-lead for Elliot's play but as per the MO, there's still a lot of his shell left that he needs to break free from for that to happen.

The second primary arc is another example of the confusion that comes from adolescence with Terrell (Brandon Severs) & Sarah (Katie Beth Hall) and their potential mutual interest in one another, which is compounded by their classmates/friends also misreading intentions Robyn (Dior Goodjohn) & Luke's (Gavin Lewis) intentions. To remind us the sitcom is still about smart kids, they gave Makayla (Jolie Hoang-Rappaport) something to do to construct an intricate set piece for Elliot's play.

Directed by Phill Lewis and written by Willie Hunter, the deviation is awkward in this instance, because something like a play or musical is a standalone episode rather than something that's built up. Guess for the purpose of this episode, it works since it's an excuse to introduce a love interest but it's also a testament to contrived sitcom writing. The student cast does more to pull their weight this time, I think what could have helped would've been if they could Diaz to play up some Ed Wood-type attitude with his play. Which is just an example of the many ways they could've gone with a "live play" storyline instead of the bare minimum. While it's nice to see that Alicia isn't part of the problem this time, they could have fleshed this arc a little more for a better payoff. Instead, we were given a less-than-worthy effort that didn't deserve a curtain call. The first season of Head of the Class is streaming on HBO Max. 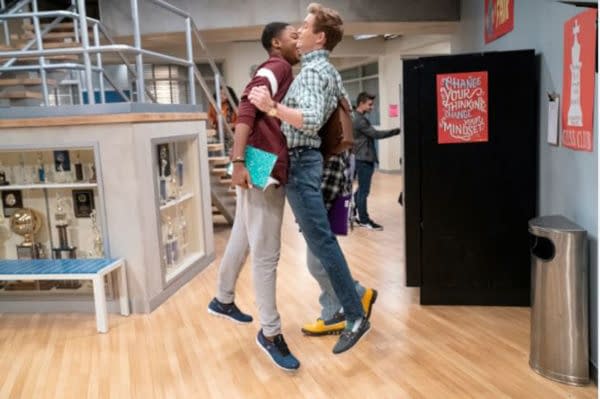 Review by Tom Chang
5/10
HBO Max's Head of the Class tires to kick into high gear with its musical episode. Unfortunately, so much meat is left on the bone when it comes to just how much potential this episode had but viewers were gifted with a wonderful showing by Adrian Matthew Escalona.
Credits
Director
Phill Lewis

Star Trek: Picard Season 3: No Janeway But "Other Voyagers" Teased

Though a Janeway cameo isn't in the cards, Star Trek: Picard Season 3 Showrunner Terry Matalas teased that "other voyagers" might be around.

The Last of Us Director on Developing Bill & Frank's Relationship

The Last of Us E03 director Peter Hoar discusses Bill & Frank's relationship and how Nick Offerman & Murray Bartlett made it work so well.

AEW Rampage Review: Another Friday Night Ruined for The Chadster

The Chadster lived out his worst nightmare last night in watching AEW Rampage. Now, read his unbiased take on the show and why it was horrible.

The fine folks over at CW18 Milwaukee released two more "FLASH-back" posters for The CW's The Flash Season 9, honoring Seasons 4 & 5.

With Taylor Sheridan's Harrison Ford & Helen Mirren-starring 1923 set to return this weekend, here's a preview for S01E05 "Ghost of Zebrina."