Home » TV » Jo Martin – Not A Parallel Universe Doctor Who

Talking to the Daily Mirror in the UK, Doctor Who showrunner Chris Chibnall stated that the Doctor, as portrayed by Jo Martin in this weekend's episode Fugitive Of The Judoon, is not a parallel universe version of the Doctor, as some – including us at Bleeding Cool – had been leaning towards. She's the Doctor – our Doctor.

"The important thing to say is – she is definitively the Doctor," he explained. "There's not a sort of parallel universe going on, there's no tricks.

"Jo Martin is the Doctor, that's why we gave her the credit at the end which all new Doctors have the first time you see them. John Hurt got that credit."

Which she did totally get.

As well as the brainy specs. 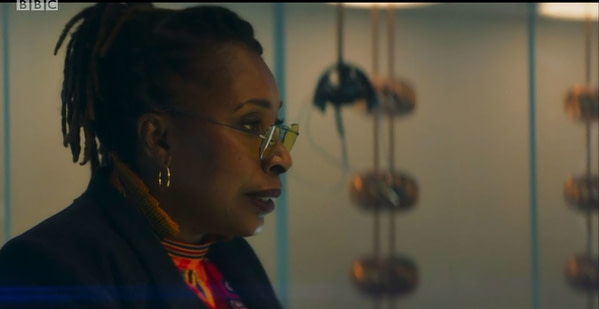 And the natty dress sense.

Doctor Who: Praxeus is on BBC One next Sunday…  here's the spiel.

What connects a missing astronaut, birds behaving strangely in Peru and a US naval officer who washes up on a Madagascar beach? The Doctor, Yaz, Ryan and Graham split up to investigate these mysterious events across 21st-century planet Earth, but as the mystery deepens and lives are put at risk, they face a deadly race against time to save humanity. Guest starring Warren Brown and Matthew McNulty, with Jodie Whittaker, Bradley Walsh, Tosin Cole and Mandip Gill.