In the seventh episode of AMC's Kevin Can F**k Himself, relationship boundaries are tested and interrogations are on the table. Same as in my previous review, in the case you found your way here before watching the episode, consider this the point where I turn on the "MAJOR SPOILERS AHEAD!" sign. Now that that is out of the way…let's get to talking about this episode.

Between moments of Allison's interrogation from two cops, one of which is Detective Ridgeway (ah yes…Patty's girlfriend? Even I am unsure of it), we get to see what has led up to this tense back-and-forth. Patty attempts to get through to Allison, helping her see ways that the cops could come after her if the plan against Kevin succeeds. One big point of contention is Allison's affair with Sam. In a moment that hurts to watch, specifically aches my heart, she tells Sam things are over and it leaves more questions for an already confusing dynamic. Knowing the ins and outs of why Allison's decisions lead to this, from Patty's advice to character development in general, really helped see beneath the iceberg of her breaking things off with Sam.

Attempting to convince the detectives, or any potential questioning, Allison's week had been consisting of a visit to Nick to discuss *ahem* matters, a routine OBGYN appointment made more complicated by her taking a fertility brochure, and trying to have Sam only be her boss. What was excellent in this Kevin Can F**k Himself episode was seeing the other side of the Sam & Allison coin. I wish we had some of this earlier on, it was incredibly nice to see more of his character explored and depth invested in his life. I hope for future looks into who Sam is beyond the sobriety and workplace shielding his character's development. I'm excited by the amount of care is placed into each character's actions and time spent flipping expectations when going to Kevin's world of sitcom lighting and vibes.

With an ending in the world of Kevin (poor Allison with all that close contact with him), the vibes shift and the laugh track is less present with the threat of someone in the home and a gun readily available to someone not as trustworthy to have it. The flash to Allison in bed, in the reality of her worlds colliding, is a fantastic cliffhanger. To top off the tension pie, the sound of a singular gunshot rings, and her eyes show she's taking it all in…this may be it. And while I have hoped to see Allison rid her life of Kevin, the moment where it could have happened gave me a weird feeling of concern for him. That alone was amazing to consider and shows how fantastic the writing truly is on the series. While the episode continued the progress from the previous episode, I hope to see Kevin Can F**k Himself figure out which side characters they wish to spend the most time on. It was great to see more about Sam, just as much as Patty's secretive dating life, but the unequal amounts spent on them had me disappointed. What doesn't have me disappointed is the unanswered "what just happened?" left in the dense air, ready to be answered in the season finale.

Kevin Can F**k Himself Season 1 Episode 7 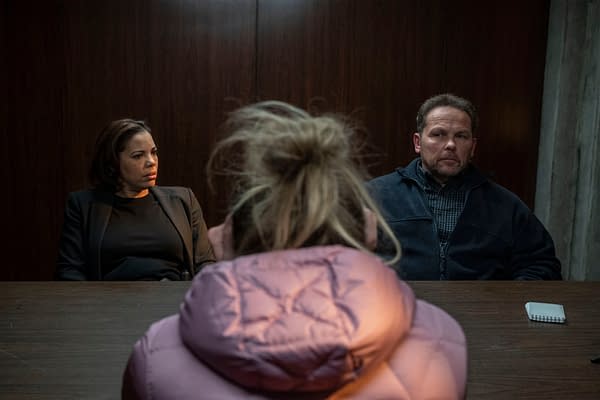 Review by Brittney Bender
8/10
This episode of Kevin Can F**k Himself dives into the tension of Allison's situation perfectly but misses out on the opportunity to expand on some of their smaller characters such as Sam and Patty. That said, this week's chapter still kept me on edge and hit us with a cliffhanger scene that left viewers desperate for answers.