AMC's Kevin Can F**k Himself premiered the first episode of its second & final season this week, folding us back into the world we left with bated breath at the end of season one. Season two went right into it, not missing really any beat and ramping up the tension in a solid approach with Neil's (Alex Bonifer) involvement. Warning, spoilers for this episode are just after this image break.

This introduction to the second and final season of Kevin Can F**k Himself does a truly fun job playing with the threat of Kevin's (Eric Petersen) world and all its brightly colored ignorance of the events outside of it. Even someone like Neil, a typically useful sidekick to Kevin, has his disappearance in that sitcom world quickly glossed over. It goes to show that flowing with the river of weaponized incompetence will only get you stuck in a loop as a minor character doing all the work of a major one.

Kevin Can F**k Himself gave some great moments between Allison (Annie Murphy) and Patty (Mary Hollis Inboden) in this first episode. But what makes it all more interesting is the interactions between Patty and Neil that Allison becomes witness to. More comes to light about the way Patty has been going along with not being like the "other girls" and how, in the end, it hasn't saved her, it's just become a way for Neil and the boys to use their misogyny through her as well. It's good to see the different light of how Neil's actions and lack of drive are influenced by how others support him financially.

The story is fairly smooth with this introduction to season two. Introducing a level of depth to the toxicity and corruption to the world of Kevin, Allison saying to Neil, "Maybe he doesn't care when I whine, but he laughs when you bleed," is one of my favorite moments in this episode because it kicks the gut. Seeing the world continue to be sitcom-fueled when Kevin was in another room for just a moment but his father was still in the living room was an interesting point to witness. Honestly, it could be seen as a way the continued usage of the women in their lives has been a generationally taught way of life.

Kevin Can F**k Himself brought the experience of Diane (Jamie Denbo) with her husband into the mix alongside Allison's experience. It set up a very good look at how common the experiences become and how dependence on the complacency within it all isn't strictly placed in Allison's life with Kevin. The theme of finding an identity beyond the ways in which a patriarchal society defines womanhood in the light of men, especially those like Kevin, is so important to the series, and I'm glad to see it so expertly woven into this episode. Ending the episode with a cartoon lobster denying Allison to search certain terms on the library computer was a hilarious and all too real way to end it.

Kevin Can F**k Himself Season 2 Episode 1 "Mrs. McRoberts Is Dead" 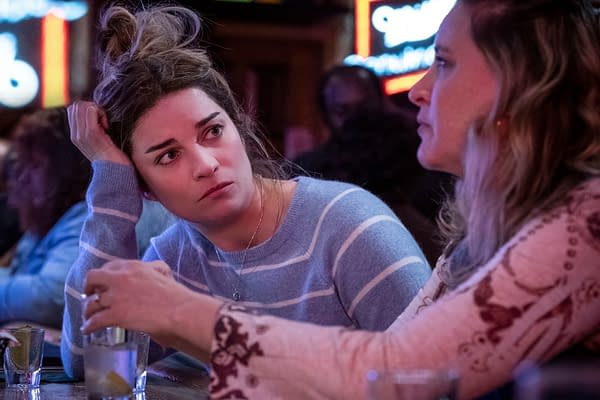 Review by Brittney Bender
9/10
AMC's Kevin Can F**k Himself S02E01 "Mrs. McRoberts is Dead" is an excellent start to the final season of the series as it explores the depths in which others outside of Allison are also affected by the sitcom-fueled nightmare. With very few awkward moments of storytelling in the episode, it became a solid start to the end of it all.
Credits
Network
AMC