Hey gang!  So this week's episode of NXT 2.0 is all about NXT WarGames this Sunday and with that in mind, we have not one, but two Ladder Matches on this episode with the advantage in each of the two WarGames matches at the event on the line.  In addition to those matches, we will also find out who will be challenging for the NXT Tag Team titles on Sunday.  There's a lot to get to, so enough out of me, let's get to the action!

We start backstage, where we see both of the women's teams confront each other and then start brawling out into the entranceway on the stage until refs separate them.

These two have a good one here, but the issue is it's not much of a Ladder Match.  Now don't get me wrong, they have an intense and fun brawling match throughout, but the ladder is just used as a steady thing in the center of the ring (I'm not being fictitious, the ladder literally doesn't move from the center of the ring) that they climb.  There's not much use of it as a weapon and certainly no creative use of it as we've seen so many times before in some all-time classics.

It's also a relatively short match, only going just 15 minutes.  I feel like each Ladder Match tonight should have gone 20-30 minutes.

Eventually, Ray climbs the ladder and grabs the briefcase to get the win and the advantage for her team at NXT WarGames.

We now head to the locker room to find the Grizzled Young Veterans trying to break into Briggs and Jensen's locker.  They're interrupted by Ikemen Jiro and Kushida and a bunch of silly and kinda racist "comedy" ensues.  Ah, I guess this is why the Ladder Matches are shorter than they should be…

A solid quick singles match here.  It's obviously a throw-away match for both men, but that's ok.  Honestly, I'd like more of that on tv.  They're wrestlers; they're supposed to wrestle.  Not everything has to be a blood feud.  Grimes hits the Cave-In for the win.

After the match, Duke Hudson heads out and mocks Grimes, showing pictures of him with short hairstyles and eventually as totally bald on the video screen ahead of their Hair vs Hair Match on Sunday.  This angers Grimes and he takes it out on Andre Chase by throwing him back into the ring and attempting to shave his head until a "student" on Chase's pulls him out of harm's way.

Hudson is such a good natural heel. Hopefully, he keeps rising.

Next, we get a video package for Edris Enofé, telling us who he is before his debut tonight against Solo Sikoa.  I hope this guy can wrestle, cause he can't talk for shit.  Zero charisma here.

We now head back to the ring to learn who the two men will be facing each other in the other Ladder Match tonight.  Team 2.0 is in the ring and they are informed that Johnny Gargano won the vote for the NXT veterans.  Carmelo Hayes cuts a promo on Gargano and sells himself.  He's followed by each of his teammates and I have to say, they each shine here.  Every one of them has a distinct voice and cuts a good succinct promo that gets the job done.

"This week at #NXTWarGames, we're coming and we're going to beat the black and gold team, and then I'm coming for the #NXTChampionship!" – @bronbreakkerwwe #WWENXT pic.twitter.com/9FpbglqLFv

We then learn that NXT fans voted for Bron Breakker to be in the Ladder Match, but they're interrupted by Johnny Gargano, who comes out and says they wouldn't be here right now if not for guys like him.

"If it wasn't for guys like me, you five wouldn't have a ring to stand in right now and that's the truth." – @JohnnyGargano #WWENXT #NXTWarGames pic.twitter.com/5SuusjtCQl

He then turns his attention to Breakker and calls him "the big bad booty nephew", which is obviously great, but again makes you wonder why he isn't just named Bron Steiner?  Gargano tells him to leave his team in the back tonight so they can just go one on one like men, which Breakker agrees to.

We now go to a backstage interview with Legado del Fantasma, who guarantee they will win tonight and will go on to win the NXT Tag Team Championship on Sunday at NXT WarGames.

Now it's time for more of this asinine MSK Shaman bullshit.  It's dumb.  It's bad.  It's a complete and total waste of time.

They're having a solid enough back and forth until Xyon Quinn makes his way out to ringside and makes sexy eyes with Elektra Lopez before he starts brawling with Santos Escobar.

The solid match continues until Wagner and O'Reilly double team Wilde to get the win.

I gotta say, I think the wrong guys won here.  I know Wagner has the rocket strapped to him right now, but Wilde and Mendoza are a much better team and you can't tell me they wouldn't have an infinitely better match with Imperium.

We head backstage to an interview with the NXT Tag Team Champions, Imperium.  They say it doesn't matter who they face Sunday until they're interrupted by O'Reilly and Wagner.

Now we get another video package for Tiffany Stratton, who again brags about being super-rich and spoiled.

Gacy is in the ring with Harland and goes on a rant about how Roderick Strong has created a toxic environment as NXT Cruiserweight Champion.  He says after he wins the title this Sunday, he will no longer allow it to represent any size, ability, or gender bias and with that in mind, he has a very large man, a short guy, and a woman teamed up against him in a three on one handicap match.

Gacy wrecks and pins the short guy, before the woman enters the ring.  They're interrupted by Diamond Mine and Malcolm Bivens tells Gacy that on Sunday they will shut him up for good.  Gacy invites Strong into the ring to face him man to man.  Strong attacks him, but Gacy responds and wipes out Strong.

We now go to a backstage interview with Solo Sikoa, who says he understands Edris Enofé, but he's in for a rough night against him.  He's interrupted by Boa who screams at him in Chinese, but appears to be in pain?  Very weird.

As this one gets started, Robert Stone heads to ringside to take notes on both men.

This is a weird one because there just doesn't feel like there's any life here.  They're doing plenty of moves and stuff, it's just dead. The energy just isn't there or there isn't chemistry, I don't know.  It just doesn't feel interesting.

Sikoa hits the Uso Splash from the top rope for the win.

Immediately after the pinfall, Boa hits the ring (now with facepaint on) and begins attacking Sikoa. Enofé interferes and Boa runs off.

Next, we go backstage to find Indi Hartwell and Persia Pirotta getting ready for action.  Hartwell's phone rings (and again, there's someone in pajamas sleeping on the couch behind them, who is awoken by the ring, but then goes back to sleep.  Who thinks this is funny?) and Dexter Lumis' doctor says that he's missing from the hospital.

We now head to the NXT parking lot, where Xyon Quinn meets with Elektra Lopez, who tells him she admires him and wishes him luck in his match against Santos Escobar next week.

This is a total repeat of last time, where Hartwell is distracted and doesn't give a damn, so Pirotta has to carry all of the weight.  Luckily they're facing two jobbers, huh?

We're now shown yet another video package for Draco Anthony, who will be debuting soon I guess.

This one again like the other Ladder Match is only given about 15 minutes.  Also like the last one, this starts pretty light on ladder action.  It's a good wrestling match though and these two work really well together.  Inexplicably, one of the big spots of the match is done during a commercial break and we can only see it through the picture in picture crap, as Gargano sets up the top of the announce table against the table on the outside and puts Breakker through it.  Really lousy timing there.  It even appears like one of the commentators tells Gargano that the spot was during a break and he looks pissed after.

Gargano is heavily limping and favoring one of his legs and appears to be in pain, so he may have pulled something.

The ladder does (finally) become involved later on, as they take turns dumping each other off of it and Breakker even shoulder tackles it into Gargano.  Breakker then leans the ladder against the ropes and Belly-to-Belly Suplexes Gargano onto it, before climbing the turnbuckle and trying a diving elbow, but Gargano rolls out of the way and Breaker crashes into the ladder.

Gargano then sets the ladder in the corner and drop toe holds Breakker into it face-first.  Breakker recovers and Gorilla Presses the ladder with Gargano on top of it for a really good visual.

Gargano lines Breakker up for a Superkick and Breakker gives him a big middle finger for his efforts and gets Superkicked anyway.  They wind up on top of the turnbuckle and Breakker hits a Frankensteiner!

They fight some more, including on the ladder, until Breakker yanks Gargano off of the ladder onto his shoulders for a Powerslam, allowing him to climb the ladder and grab the briefcase for the win.

What a great match!

After the match, both teams flood the ring and NXT 2.0 ends with a Donnybrook!

Great main event match and a fun exciting ending to take us into NXT WarGames on Sunday.  The show overall had a lot of the usual problems that plague NXT 2.0 every week it seems.  But at least they ended on a very strong note and sold the show this weekend. 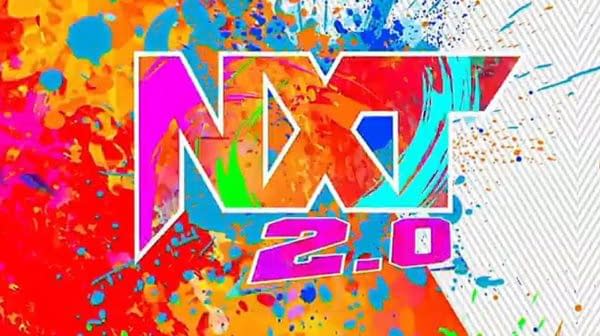 Review by Ryan Fassett
6/10
There were the usual problems this week that I harp on every week it seems, but the show did what it needed to, which is to sell the event this Sunday. The main event Ladder Match between Johnny Gargano and Bron Breakker was genuinely great and the show ended the perfect way, with everyone brawling and boiling over before being locked in a cage together in a few days.

Triple H has announced that the iconic WarGames match will make its WWE main roster debut at this year's Survivor Series event in November.

WWE Crown Jewel in Saudi Arabia on November 5 will reportedly be announced tomorrow and will be headlined by Logan Paul vs Roman Reigns.

Our preview for tonight's WWE SmackDown on FOX, where media star Logan Paul will make his WWE return for the first time since SummerSlam.

With Billy Eichner still out there promoting his rom-com Bros, we're getting a new episode of Billy on the Street with Jack Black on Monday.