Hey gang!  Last week's SmackDown… had a lot of room for improvement.  It was lacking in star power, had a small number of very short matches, and didn't really do much in furthering any storylines.  But, it's a new week and tonight we at least know that WWE's top star, Roman Reigns, will be back so that has to help a little bit.  Right?  Let's take a look and find out!

And it takes no time for "The Head of the Table" to make himself seen, as the Universal Champion Roman Reigns makes his way to the ring to kick-off the show, accompanied by Paul Heyman and the SmackDown Tag Team Champions, The Usos.

Reigns tells us he was gone for SmackDown last week because he was on vacation and came back because everyone was bitching he was gone (I mean yeah, there's not much else to tune in to see).  He then goes in on Brock Lesnar, making fun of him for his fine and suspension, and takes credit for it. He then turns his attention to The Usos' loss last week to The New Day.  He demands to know who was pinned to lose the match:

They are interrupted by The New Day, who mock The Bloodline for all of their catchphrases and nicknames.  King Woods makes a challenge that he will face Jimmy Uso tonight on SmackDown and if Woods wins, Jimmy will have to "bend the knee" to show respect to him.  While the Usos are against it, Reigns accepts the proposal and the match is set for tonight.

Before the match, Sonya Deville is interviewed backstage where she says she's doing all of this to Naomi to inspire her and takes credit for lighting a fire under her.

"@NaomiWWE is glowing with confidence right now because I lit a fire underneath of her." – @SonyaDevilleWWE #SmackDown pic.twitter.com/9k0u12wwuC

As the match starts, Naomi is all over Baszler here.  She eventually rolls up Baszler for the win, but Deville heads out quickly and says Naomi grabbed the rope before the pinfall, so the pin doesn't count.  She restarts the match and Baszler locks in the Kirifuda Clutch to beat Naomi.

We now head to the locker room, where Reigns chews out his team, saying that he can't take a one-week vacation from SmackDown and he even takes a shot at the quality of Raw (HA!).  Jimmy laughs, which pisses off Reigns, who gets in his face for losing last week.

Next, we get another video package for Xia Li and learn she will make her SmackDown debut soon.

We get a backstage interview with another recently promoted to SmackDown former NXT star, Ridge Holland.  He says his idol is Sheamus (?!?!) and he can't wait to meet him.  He recounts Sheamus' greatest career accomplishments and says he's learned a lot from him.  Alright, so I guess these two are going to be a team soon.  Or they'll fight.  Maybe both.

They now recap Shotzi Blackheart's heel turn last week and her assault on Sasha Banks.  That transitions into a backstage interview with Blackheart, where she definitely shows her new edge and explains how she's lost everything since coming to SmackDown and she's reached her breaking point and Banks is her target.

A slow, uncomfortable-looking match here with three green guys and a criminally under-used Cesaro.  Cesaro finally gets the hot tag and hits all the big spots on his opponents until they double-team him for the win.

We head backstage now to find Jeff Hardy and Aliyah chatting until they're interrupted by both an interviewer and then "SmackDown locker room leader" Sami Zayn, who offers some dumbass advice to Aliyah.

Drew McIntyre now hits the ring for another SmackDown open challenge.  This week he's taken up by Ricochet and that isn't his best decision, as McIntyre just manhandles him for a couple of minutes.

We see Mustafa Ali watching the match backstage on a monitor and he's asked why he's interested?  He says Ricochet and he have a lot in common.

Back to the match, Ricochet is able to get some kicks and some splashes in, but McIntyre is just taking a breather and eventually plants him with a huge Claymore to a moonsaulting Ricochet for the pinfall.

After the match, McIntyre shows Ricochet some respect and tells him he did well.  What a guy!

We head backstage again now to find Woods and Kingston goofing off.  They're interviewed about the match tonight and Woods says Jimmy will inevitably "bend the knee" to him.

So Happy Corbin and Madcap Moss apparently have an in-ring talk show on SmackDown now and if this isn't the single worst gimmick in wrestling right now, I don't know what is.  It's obnoxious, stupid, and has no chance of being remotely entertaining.  I get they're heels, but they're not threatening or to be taken seriously in any way, so that makes them entirely pointless and only in existence to literally annoy the audience, and trust me, WWE doesn't need any more help with that!  This is pure "go away heat".

Also, do we really need another talk show on WWE?  Every WWE talk show for the past 30+ years since Piper's Pit has been varying degrees of dumb/awful and there's really no way the segment can be taken seriously by the audience.  Think about it: you're watching a show that is trying to convince you that you're watching legitimate athletes in competition and/or trying to kill each other.  Why the hell would they set up a talk show?  Even thinking of it in Jerry Springer terms, it makes zero sense.

Anyway, before we get to that horseshit, we get a backstage segment where Ali approaches Ricochet in the locker room and proposes that they team up next week.  Ricochet turns him down, bringing up all of the ways he's a loser and a jerk.

So, onto the shitshow… The two idiots have The Viking Raiders on and it doesn't go well and a match breaks out.

The match is whatever.  Michael Cole says "vintage Corbin!" at one point and I forgot how to breathe for a moment.  It only lasts a couple of minutes (thank god!) and it ends with a count out of Corbin & Moss, cause you know, they've already spent the past ten minutes pissing off the crowd with a horrible segment and now they really want to turn the knife by having a shitty non-finish to the match.

We now head backstage AGAIN to find Sami Zayn bothering Hit Row and offering them some criticism of their entrance.  Hit Row asks him to show them how to improve their entrance and they head out.

Zayn comes out dancing like a complete idiot on the stage (you can almost hear Vince cackling at Gorilla).  Hit Row follows him out and begins cutting promos on him.

In the locker room, the Usos try to hype up before Jimmy's match next and when Jimmy asks Reigns if he's coming, Roman condescendingly asks him how many of his problems does he need to fix for him?

An alright back and forth battle here, though not really anything we haven't seen before from these guys who have been fighting for years now.  Woods does hit a very impressive and very high top rope leg drop on Uso at one point for a great visual!

Eventually, both Kofi Kingston and Jey Uso get involved for some shenanigans to distract the ref and as Jimmy argues, Woods rolls him up for the pinfall.

After the match, Jimmy Uso gets down to bend the knee for Woods, but Roman Reigns comes out of nowhere to blast Woods with a Superman Punch.  The Bloodline then beat the hell out of Woods and Kingston and the Usos take aim at Kingston's leg, seemingly destroying it with kicks and a top rope stomp on it.  Reigns poses with his title belt as SmackDown ends.

A better show than last week, but still just way too much pointless crap.  WAY too many backstage segments, not enough matches, and the feeling that if Reigns and co. weren't on screen, then it wasn't important or worth paying attention to. 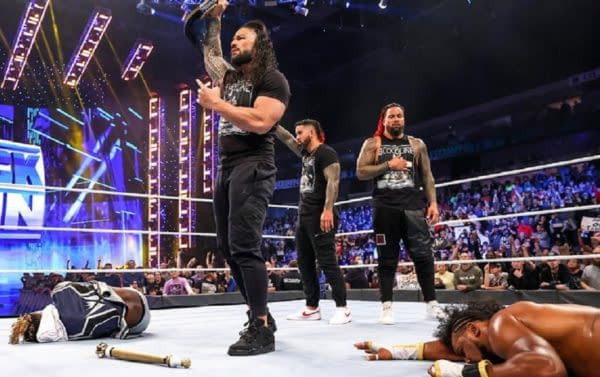 Review by Ryan Fassett
4/10
A better episode than last week, but that's pretty much 100% due to Roman Reigns' presence and that was proven further tonight by whenever he wasn't on screen, it felt pointless. Say what you will about WWE's handling of him over the years, but Reigns is doing his career-best work right now as a heel and is indeed the engine powering the car. The rest of the show isn't great and some of it (Happy Corbin, looking at you!) is downright awful and makes you want to turn it off. There's good stuff here this week, but it did not outweigh the bad.

SmackDown Recap 1/14: Setting The Stage For The Royal Rumble

Our recap of this week's SmackDown on Fox, which saw Roman Reigns and Seth Rollins face-off ahead of their match at the Royal Rumble.

SmackDown superstar & 2021 WWE King of the Ring Xavier Woods has suffered a leg injury and will miss this month's WWE Royal Rumble.

Tales of the Walking Dead EP & showrunner Channing Powell took to Instagram to signal the start of filming on the anthology series.

As if you needed more reasons to check out Hulu's Pam & Tommy, Jason Mantzoukas will be voicing Tommy Lee's penis. What else could you need?

She-Hulk star Tim Roth said he was "totally surprised" to be asked to return as the Abomination and discussed his meeting with Kevin Feige.