Throughout the Star Trek franchise, we see certain characters taking more creative liberty with the Federation's Prime Directive (*cough* Janeway *cough*) than naught, and the latest episode of Lower Decks in "A Mathematically Perfect Redemption" is no exception. The episode focuses on Ensign Peanut Hamper, voiced by Kether Donohue (Birdgirl), an exocomp, a sentient utility robot that has various tools like Star Wars mainstay R2-D2 along with a portable replicator. The following contains minor spoilers so consider this fair warning.

The cold opening recapped Hamper in the concluding events of the season one episode "No Small Parts," where she refused to make the sacrifice to save her crewmates, instead choosing self-preservation. Her actions didn't affect the Cerritos as it made its escape and left her behind with the surrounding debris. As we catch up to her, we find that she's able to escape scavengers and build herself a warp nacelle to travel to a remote planet occupied by a humanoid avian species with the ability of speech…since it's sci-fi and all. So we see Donohue's Hamper shine every which way, checking off all the clichés of the "white savior" trope of an outsider bringing superior technology to a civilization that doesn't understand but with a robotic spin right down to falling in love with a village leader.

It's at that point that it starts to feel far more like a Rick & Morty episode than just a Star Trek one because Hamper is about as egotistical as Justin Roiland's Rick Sanchez. She's not really there to enhance society rather than share her superior technology, brag about it, and feign interest in the locals' praise and culture. Sure, it's on-brand since creator Mike McMahan came from that Adult Swim series. I'm also well aware of how Star Trek has done a "fish-out-of-water" story involving a cast member, but "A Mathematically Perfect Redemption" doesn't even do that. Instead, it revisits a character long since abandoned. Directed by Jason Zurek and written by Ann Kim, the episode is far removed from the traditional Star Trek: Lower Decks episode but does represent a change of pace from the norm- even if it's largely a one-note offering. 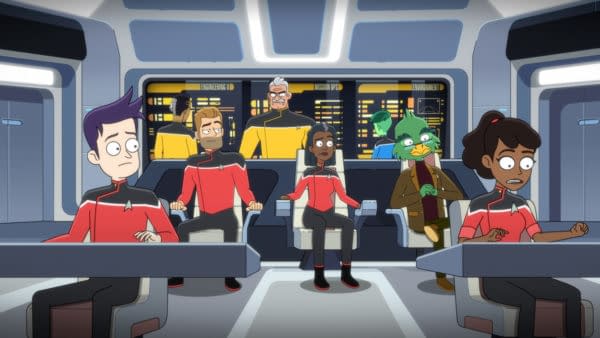 Review by Tom Chang
6.5/10
"A Mathematically Perfect Redemption" felt less like a Star Trek: Lower Decks episode and more like a rejected Rick & Morty script that creators Dan Harmon and Justin Roiland asked Mike McMahan to repurpose for his show. Nothing really wrong with that, but the cast is hardly involved in what was a one-note offering that took advantage of Kether Donohue's comedic talents.
Credits
Director
Jason Zurek

Looks like the second season of Disney+ & Lucasfilm's Andor is getting filming going over at Twickenham Stadium in South West London.

If we're being honest, we have four theories about the Season 6 finale of Adult Swim's Rick and Morty that we really hope we're wrong about.

Warner Bros. Discovery's HBO Max is back on Amazon Prime Video Channels with a deal that includes the upcoming HBO Max/Discovery+ service.