FOX's The Great North ended its second season with an ode to family and father's day, with plenty of fart and poop joked in the mix to make it a great episode. Some minor spoilers may be ahead, so consider this your fair warning before reading any further…

The Great North saw the Tobin family venture into the great outdoors for Father's Day, but a certain Beef Tobin wasn't initially a willing vacationer at Family Land. Wolf had a lot of excitement for what the weekend could have held for the family, complete with connecting to other families and their RV camp adventures as the rest of the family found parts they hoped for in the vacation.

From Campfires to getting in touch with nature, most of the family embraced the trip away but Beef was holding in a secret. While Judy found French-Canadian love turned to farting reality-check, Moon found friends out in the forest with an adorably hilarious song to accompany the encounter.

Beef ended up revealing that his past included an attempt to get his ex to embrace Father's Day and family but instead, he ended up dropping a sparkler into the sewage dump lines causing an odorous explosion. The Great North continues to celebrate the ways in which family can embrace the odd turn of events in life with humor and compassion.

The anticipation and expectations of what was coming, like Moon's arrival at the Father's Day Follies event with skunk friends, for example, was something I find really important about The Great North. It's consistent with its characters and their personalities. Moon cares a lot about nature and the individual left out of the group, Judy doesn't sacrifice her comfort for potential romance, Ham cares about helping others and himself by bettering those around him, and Honeybee shows always how much she cares for the Tobin family as her own, Wolf will do the most for those he loves, and Beef mistakes often rise from silly mistakes. This was a fantastic way to end the sophomore season of the series and I can't wait for what's next in season three.

I'd let a skunk spray me with love any day. 🦨 #MusicMonday 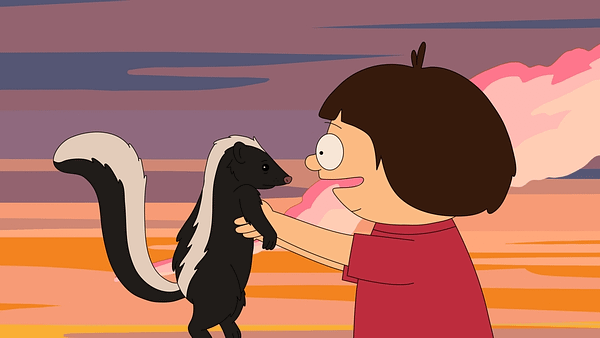 Review by Brittney Bender
10/10
FOX's The Great North S02E22 "Papa Don't Fiend Adventure" brought an excellent amount of closure to the end of its sophomore season with tremendous moments of character dialogue and humor mixing with the heart of the series.
Credits
Network
FOX