WWE came to Columbus Ohio for Extreme Rules, with a card stacked with four title matches and quite a bit of promise. But was the company able to deliver? I posted some predictions before the show on Sunday morning, so we'll see how smart I am in this review as well.

On the Extreme Rules Kickoff Show, Liv Morgan beat Carmella in a match that for sure happened. There's no denying that. Liv Morgan winning was what I predicted before the show, so this match put me 1-0 on predictions.

Big E pinned Bobby Lashley in a six-man tag match to open the PPV itself. This match was added a half-hour before the show, which is I guess how long it took WWE to figure out what to do since they moved Orton vs. Lashley and Big E's Money in the Bank cash-in to Raw a few weeks ago to try and beat AEW in the ratings. I didn't predict the outcome of this one since it was added after I posted my picks, but this was the obvious outcome. The match made Lashley very upset and he requested a championship rematch for Raw on Monday.

It looks like Takeback Season is going to need to continue a few more weeks because Punxatawney Phil came out of his hole, saw that The Street Profits once again failed to win back the Smackdown Tag Team Championships, and went back inside his hole and immediately canceled his Peacock subscription. This is the outcome I predicted, making me 2-0.

Charlotte Flair and Alexa Bliss faced off for the Raw Women's Championship and, despite everything about her presentation reminding viewers of her father's sexual misconduct scandal, Charlotte Flair retained, which is a massive vote of confidence in her from WWE. Alexa Bliss, on the other hand, not only lost the match, getting pinned after Natural Selection, but lost her own gimmick afterward, as Charlotte ripped the Lily doll into pieces and carried its skin out of the arena with the belt. Bliss had a meltdown after the match about this. I find this outcome shocking because I was under the impression the doll was a big merch mover, but I forgot to take into account that Alexa is from Columbus, Ohio and no one in WWE is allowed to win in their hometown for dumb Vince reasons. Maybe they'll find a way to bring her back on Raw. This put me 2-1 in predictions.

Damian Priest defended his United States Championship against Jeff Hardy and Sheamus in a Triple Threat, and the crowd was solidly behind Hardy as the babyface, even going so far as to boo Priest during the match. It was nothing against Priest though, and when Priest ultimately pulled out the victory with a rollup on Sheamus, the crowd applauded in appreciation of what would be the match of the night. I had Priest down to win, making me 3-1.

Becky Lynch and Bianca Belair faced off, this time in a real match, for the Smackdown Women's Championship. It was a good match too, but ended in disqualification when Sasha Banks returned to attack Belair and then Becky. Sasha interfering to prevent Belair winning the title so Becky could go on to feud with Sasha was, of course, my prediction for this match, so that's 4-1.

Finally, in the main event, Roman Reigns defended against The Demon in a hardcore match. The match was decent, up until the final five minutes. Balor had Reigns on the ropes when The Usos showed up, forcing Balor to devote his energy to taking them out. Everyone ended up laid out outside the ring when the lights started flashing red, which commentary described as The Demon's heartbeat. This woke up The Demon as the lights in the arena turned fully red, giving everyone Hell in the Cell 2019 flashbacks, and then Balor jumped up fully revived and started kicking everyone's ass while his theme music played. He got Reigns in the ring and climbed to the top rope for the Coup de Grace… and the top rope "snapped," causing Balor to fall, get speared, and get pinned. This was easily the stupidest finish to a match since Hell in a Cell 2019, and I almost think they did it on purpose, since Seth Rollins discussed that incident at length in the Broken Skull Sessions released this weekend. Either way, The Demon gimmick is basically dead, because not only has Balor lost as The Demon, but even when he does do it in the future, it will be more of the dumb bullshit with the red lights. REigns is still champ and can go on to defend it against Brock Lesnar in Saudi Arabia, and I end the night 5-1 in predictions and still shocked that Alexa Bliss lost.

Extreme Rules had some decent matches, with Hardy vs. Sheamus vs. Priest the best one, but Becky vs. Belair pretty damn good too and the main event decent until the ending. What people remember about these shows is the ending though, and the ending to this one absolutely sucked, even more than usual, even by WWE standards. 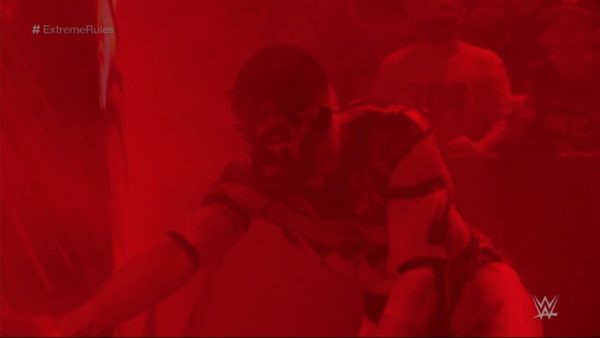 Review by Jude Terror
3/10
Extreme Rules had some decent matches, with Hardy vs. Sheamus vs. Priest the best one, but Becky vs. Belair pretty damn good too and the main event decent until the ending. What people remember about these shows is the ending though, and the ending to this one absolutely sucked, even more than usual, even by WWE standards.

Just how different was the first episode of the New Era (TM) of WWE Raw compared to the Old Era? Do we really need to answer that?

WWE is promoting a "New Era" for the season premiere of WWE Raw tonight, which means more of the same old crap but with different people involved.

Six new champions were crowned at Impact Wrestling Bound for Glory, with one title changing hands twice and another awarded for the first time.

Marvel unveiled four Madelyne Pryor variant covers for the final issue of Hellions, which will be consciously unpublished in December.

Fortnite & Universal Series "We Will Be Monsters" Offers Modern Takes

Universal Pictures & Epic Games' Fortnite team up for the animated series We Will Be Monsters, with modern takes Dracula, The Bride & more.

The recap of the 2021 NXT Halloween Havoc event, which saw quite a few new champions crowned in some high risk match stipulations.