With Undisputed WWE Universal Champion Roman Reigns seemingly vanishing off the face of the earth, the focus must now be put on the other titles WWE has to offer.  On last week's WWE SmackDown, we learned that SmackDown Women's Champion Ronda Rousey will have to defend her title against Natalya eventually, while Intercontinental Champion Ricochet would have to defend his title against the undefeated Gunther on this week's show on FOX.  Did he survive with the gold still around his waist?  Let's take a look.

Drew McIntyre vs Sheamus – Money In The Bank Qualifying Match

A solid slugfest here between two veteran heavyweights to open the show this week.  Eventually, the brawl makes its way to ringside and both men swing chairs at each other, leading the ref to call for the bell.

After that, they continue brawling around the ringside area, even through a commercial break.  As officials try to stop them, they fight into the crowd, where they're finally separated.  This was good stuff!  The aggression felt real and very intense.

We next get a video package highlighting the media response to the fantastic Cody Rhodes vs Seth Rollins Hell In A Cell match last Sunday and Rhodes' speech the following night on Raw, before he was attacked by Rollins with a sledgehammer.

We then learn that Rhodes' surgery was successful, but the recovery time is expected to be about nine months.  Hopefully, he'll be back much sooner than that (ahem, Royal Rumble, ahem).

Next, we go to a backstage interview with Lacey Evans before her return match, where she says "I may not be better than Xia Li, but she damn sure ain't better than Lacey Evans!"  Wait, what?  Did that make more sense in her head?  I had no idea Sid was writing for SmackDown now?!

A very short, not great match here.  Li does most of the work, as Evans seems completely distracted with her outfit and making sure she doesn't have a wardrobe malfunction.  In the end, Evans clobbers Li with a Woman's Right for the pinfall.

We then go to Adam Pearce's office, where Drew McIntyre demands that he put him in the Money In The Bank Ladder Match.

"Put me in the match."@DMcIntyreWWE feels like he should be going to #MITB. #SmackDown pic.twitter.com/3mUI6IfAHl

Next, we perplexingly get a hype package for The Viking Raiders, saying they're coming soon to WWE SmackDown… despite being there for years now?

We then head back to Pearce's office, where now Sheamus barges in with Butch and also demands to be put into the Money In The Bank Ladder Match.

You hear him @ScrapDaddyAP?@WWESheamus wants results not excuses! #SmackDown pic.twitter.com/xU8DRHlBEW

Next, we head to the ring, where Ronda Rousey cuts a very lifeless promo on Natalya but is interrupted by Shotzi, who cuts a far superior promo on Rousey and challenges her to a match right now.

A decent match here with a very impressive showing by Shotzi, who proves herself to be a very qualified foil for Rousey on the mic and in the ring.  The Champ does take it in the end though by making her tap out to the Armbar, but hopefully, this is another step toward Shotzi becoming one of the top women stars on the show.

After the match, Natalya jumps Rousey from behind and locks her in the Sharpshooter.

Next, we go to a backstage interview with Riddle, who explains how he's up to the challenge when he faces Sami Zayn tonight and if he wins, he'll get a title shot against Roman Reigns.

A win tonight and he'll be one step closer. #SmackDown pic.twitter.com/gymA3MjHz6

So despite some moments of offense by Ricochet throughout, Gunther just brutalizes the dude here and that's exactly what should happen.  Gunther is a wholly believable monster and should be booked as such.  He puts Ricochet away with the Powerbomb to win the title and hopefully, he can now restore it to its former prominance.

We now find Sami Zayn backstage getting ready when he's confronted by Paul Heyman, who tells him if he wins, he's in The Bloodline, but if he loses, then that won't be good for him.

If he loses tonight what @HeymanHustle? What will happen if @SamiZayn loses?! We need answers! #SmackDown pic.twitter.com/ZEvbJ9oEi2

So the stipulation here is if Riddle wins, he gets a title shot against Roman Reigns.  But if Zayn wins, Riddle is banned from WWE SmackDown forever.  We get Heyman on commentary for this one and that's always a welcome addition.  The match is fine, but at one point Zayn starts doing Randy Orton's taunts and Heyman calls him a schmuck, which is easily the best part of the whole thing.  It gets pretty exciting towards the end with lots of near-falls, but Riddle blasts Zayn with an RKO for the win.

After the bell, The Usos rush to the ring and beat the hell out of Riddle, but Riddle responds with a kendo stick and beats them out of the ring as WWE SmackDown ends.

And that's that for this week's WWE SmackDown, which was pretty ok.  The matches were good and there wasn't much stupidity, though the show felt a little light on story.  But overall, it wasn't too bad. 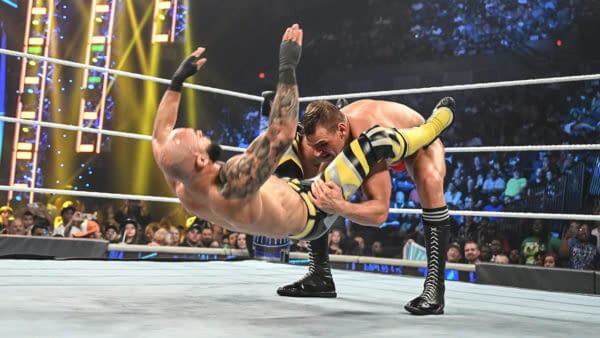 Review by Ryan Fassett
5.5/10
FOX's WWE SmackDown was a solid enough show this week with decent matches throughout and no segments that made you want to pull your hair out. There was a lack of story though and I wouldn't call anything memorable here, but not bad overall.