Last week's WWE SmackDown on Fox ended with an impromptu nasty brawl in the parking garage between two WrestleMania opponents.  Royal Rumble winner Ronda Rousey and SmackDown Women's Champion Charlotte Flair violently had it out for several minutes as WWE officials tried in vain to separate them.  Flair eventually ended the donnybrook when she put Rousey in a submission hold atop a car, but while Flair had the last laugh a week ago, will Rousey get her back this week?  Let's take a look.

We kick things off this week on SmackDown with The Bloodline heading out to the ring, lead by the Universal Champion Roman Reigns.

Reigns brags about bloodying Brock Lesnar at Madison Square Garden a couple of weeks ago and promises to do the same again tonight, but Paul Heyman informs him that Lesnar won't be there due to weather issues.  Reigns then mocks Lesnar for not showing and says he's scared of him.

Heyman then informs Reigns that Lesnar has indeed landed and is almost there.  Well, that's the quickest swerve ever.  The Bloodline quickly exits the ring and runs backstage to get out of dodge.

Reigns and his crew rush backstage to the parking area to make their getaway in an SUV, but before they can, Brock Lesnar arrives and does his best "Stone Cold" Steve Austin impression with a forklift tractor and impales the SUV.  He lifts the SUV up and dumps it on its side.  The Bloodline then runs to a nearby pickup truck and try to get away, but Lesnar runs up to them and rips one of the doors off, and keeps it as a prize.

Lesnar then makes his way out to the ring, carrying the truck door with him.  Lesnar grabs a mic and tells Reigns that at WrestleMania, he's coming for blood.  I have to say, this was all a hell of a lot of fun and a great opening to SmackDown.  This version is easily the best and most fun Lesnar has ever been in his 20-year WWE career and he and Reigns are working really well off of each other in this build.  Good stuff.

An ok tag match here.  Los Lotharios continue to impress and look like one of the best tag teams in WWE right now.  They have great chemistry as a team, work very well, and appear to be able to gel with almost any team they face.  Hopefully, they get a big push this year with some gold cause they've earned it.

The faces go over here though, as Boogs shows some serious powerhouse strength with his Military Press and the Boog Cruise to get the pinfall.  Boogs is another one I'd like to see get a big push this year.  He's got great charisma and incredible strength.  Sounds pretty marketable to me.

A whatever six-man tag match here.  McIntyre is the only great talent involved in this one and he only gets involved at the very end to hit the Claymore for the pinfall.

We now get a backstage promo from Sami Zayn, who blames the loss of the Intercontinental title a couple of weeks ago on SmackDown on his WrestleMania opponent, Johnny Knoxville.  He challenges Knoxville to make their WrestleMania match an Anything Goes Match.  Let's see if Knoxville responds on SmackDown tonight?

This match goes on way too long and isn't that interesting or exciting anyway for most of it.  It gets better towards the end, but ends in a No Contest when Natalya and Shayna Baszler run in to beat up everyone, before Queen Zalina and Carmela join in on the assault.

We next get a video response from Johnny Knoxville, who accepts Sami Zayn's challenge.

Next, Pat McAfee is summoned away from the SmackDown announce table to Vince McMahon's office.  We see him exit the office, but don't see what happened inside, which means Vince wasn't actually at the show or refused to leave Gorilla to appear on camera.

McAfee then makes his way into the ring and cuts a promo about seeing Pro Wrestling for the first time as a kid and how he wound up working for WWE.  He's interrupted by Austin Theory and McAfee tells him he was told by McMahon to apologize to Theory for their fight last week, or he'll lose his WrestleMania match.  McAfee then insults the hell out of Theory and Theory shoves him and runs.  Good promo by McAfee here.

I really like the intensity in this one.  Kofi legit looks like he wants to beat the hell out of Holland for hurting his friend and Holland looks like he's fighting for his life.  Butch and Sheamus eventually get involved and the distraction allows Holland to hit Northern Grit for the pinfall.

SmackDown Women's Champion Charlotte Flair hits the ring next and cuts a promo celebrating herself for taking out Ronda Rousey last week.

She challenges Rousey to come out and face her now, which she does and Flair goes after her with a kendo stick.  Rousey is able to fight it off.  They brawl around the ringside area and Flair finds another kendo stick (?!?!) and beats Rousey with it, before Powerbombing her through the announce table as SmackDown ends.

And that's that for this week's episode of SmackDown and honestly, it wasn't half bad.  The Lesnar/Reigns stuff at the beginning was fun and the show didn't have a lot of nonsense or dead spots.  There was actually a feeling of necessity in watching this week and it made a push towards WrestleMania. 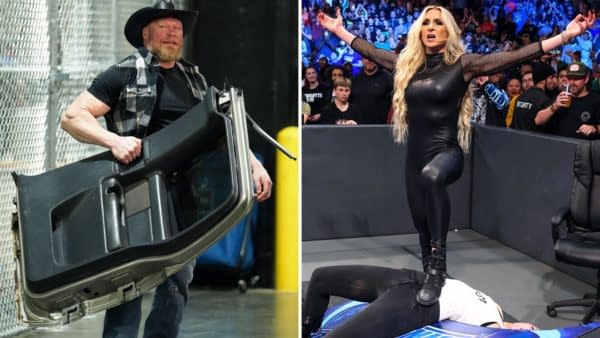 Review by Ryan Fassett
6/10
A really fun opening segment between Brock Lesnar and Roman Reigns was followed by an overall solid show this week. None of the matches were instant classics, but there was a feeling like they were actually building towards WrestleMania here and there was a minimum of silliness.