The third episode of Showtime's Yellowjackets brings us closer and closer to the evolution of insanity and survival for the characters post-crash and as adults. As usual, if you have yet to watch or still need to do some catching-up, be warned that there will be some major spoilers present moving forward (so don't blame us).

I love horror pretty much in any form, from film to the written word. And in many ways, I've become unfazed by stuff or I see it coming from a mile away. This episode of Yellowjackets, which felt like a roller coaster of emotions (like a panic attack…but in a good way? I get to say this, people- I am diagnosed with anxiety), was able to step up in some really interesting ways. Let us start with the amazing acting from Juliette Lewis and Christina Ricci, especially in some of the toughest scenes to watch (if you know, you know- otherwise, go back and rewatch them again). Misty is quickly proving that growth hasn't happened over the years, while Natalie continues to try and navigate the toxic attraction to what can hurt her after rehab. While some things on Yellowjackets, like the reveal of what Misty had done to Natalie's car, weren't total surprises based on her past actions, they still managed to shift hopes and expectations brilliantly.

This episode of Yellowjackets had to be the scariest one yet of the series' still-early run, featuring some fun appearances, from "missing eyeball dude" opening grandma's eyes at her funeral (I would haunt my grandkid for that) to a doll in a basement disfigured in a way that has me suspecting Taissa's son. Eyeballs and fear of death are something that certainly runs in that family, blood-related or not. The continued switch between Taissa's childhood experience with her dying grandmother, post-crash additional trauma of an abandoned cabin, and her conversations with her son (he has to be haunted right? Right?!?) was so well done and so smoothly executed that it didn't upset the flow of storytelling for each of the respective timelines. The immersive quality of both the joyful moments and stressfully horrific ones made this another fantastic chapter of a very intriguing mystery. Showtime's Yellowjackets is one of the best shows on television right now, and a true find for those who love horror and true crime (who I'm sure are nodding in agreement as they read this). 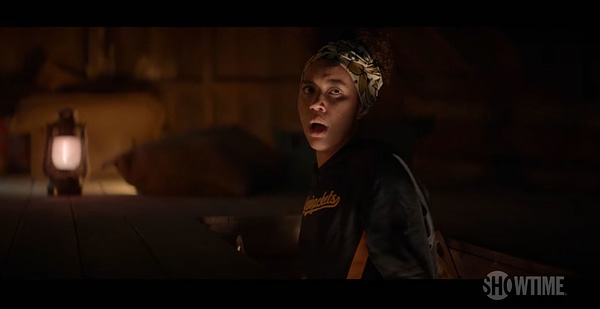 Review by Brittney Bender
10/10
Proving to be one of the best shows on television right now, this episode of Showtime's Yellowjackets made me wish I could rate past a "10." Yes, it was THAT good. The blend of horror, grief, and weirdly appropriate comedic moments gave this one the push it needed to rank as another excellent chapter in a truly fascinating series.
Credits
Network
Showtime