The Cyberpunk 2077 branded setting lets its characters buy dreams via an in-universe technology called braindances, which writer Bartosz Sztybor uses judiciously. There's no awkward tap dancing around literary contrivances to get to a character's inner workings. Dreams come with the setting for free.

What're the dreams? Tasha wants to be Conan. Mirek other wants a calm, quiet life.

The dreams…errr…braindances are drawn by the now Eisner-nominated Filipe Andrade, and the normal setting is drawn by Alessio Fioriniello. Frustratingly, the credits page names two colorists (Krzysztof Ostrowski and Roman Titov) and doesn't mention who colored which artist, so assigning coloring praise is fruitless. Fiorniello's work below is expressive and unrefined, which suits Night City perfectly.

Letterer Aditya Bidikar does a fine job capturing the exuberance and reticence of the two main characters in their work. Maia Kenney's translation (credited as English Dialogue Adaptation) seems fine. The choice to use either Spanish or Italian for a too-friendly braindance seller was a nice touch.

Lord knows what's happening with the video game these comics tie in to, but Cyberpunk 2077: Big City Dreams stands on its own.

Two scavengers in Night City make a living for themselves stealing cyberware and indulging in parties and braindances. One seeks to become the most famous gangster in the city. The other longs for something more–meaning, belonging, warmth . . . As they chase their dreams, their paths begin to deviate. But one thing they can both agree on, in a place like Night City–you run, you fight, you change, or you die. 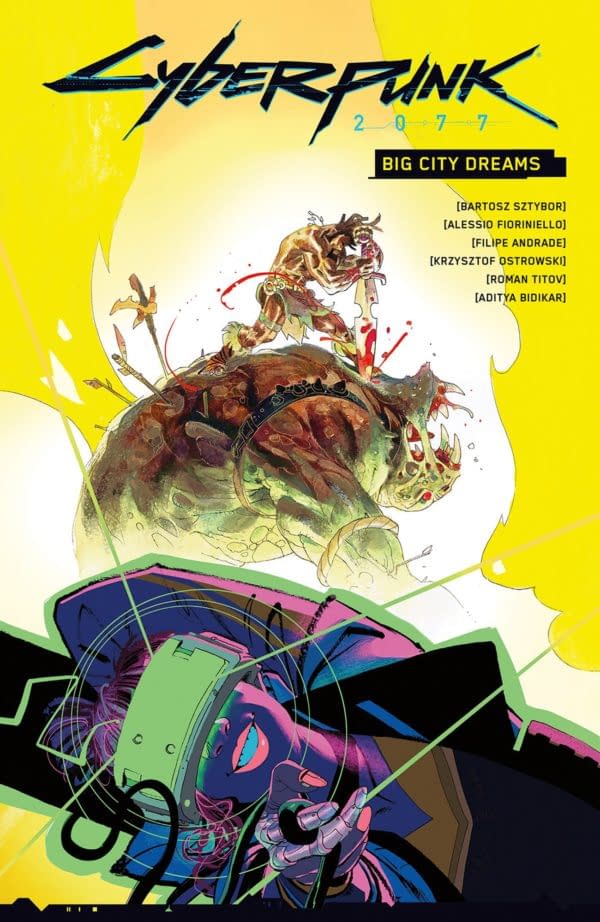