With engrossingly strong visuals and a pitch-perfect plot, this debut science fiction title balances brilliant foreshadowing with deft characterization to deliver on every level. Eve #1 creates very strong emotional bonds and tension, and the reader gets everything they need to enjoy this engaging work.

Eve, as far as she knows, grew up with her father on an island, learning science and useful things while he worked as a researcher of some sort. When she wakes up, emerging from a suspended animation pod, and discovers that her memories were all implanted to help her get through what's next.

Victor LaValle's script here has enormous patience as it fleshes out the exposition for the protagonist and for the reader. The visuals from Jo Mi-Gyeong, Brittany Peer, and Andworld Design likewise present the claustrophobic futurescape with brisk color and excellent detail. Everything here worked well, especially framed by a wonderful narrative callback that's inspiring.

All around, this is strong, near-future work with its head aimed firmly at the sky. RATING: BUY.

Eve #1
By Victor LaValle, Jo Mi-Gyeong
For fans of Undiscovered Country and Little Bird comes a new adventure series from award-winning author Victor LaValle (Victor LaValle's Destroyer) and rising-star artist Jo Mi-Gyeong (Jim Henson's The Dark Crystal) about a dangerous journey across a future dystopian America to save the world. When the ice caps melted, most of humanity was lost to the hidden disease that was released. Now, a mysterious girl named Eve has awoken in secret and must deal with a world that's nothing like the virtual reality she was raised in. In order to save her real father, Eve must embark on a deadly quest across the country, but she has no idea of the threats that await her – or the price she will pay to restore life to a dying planet … 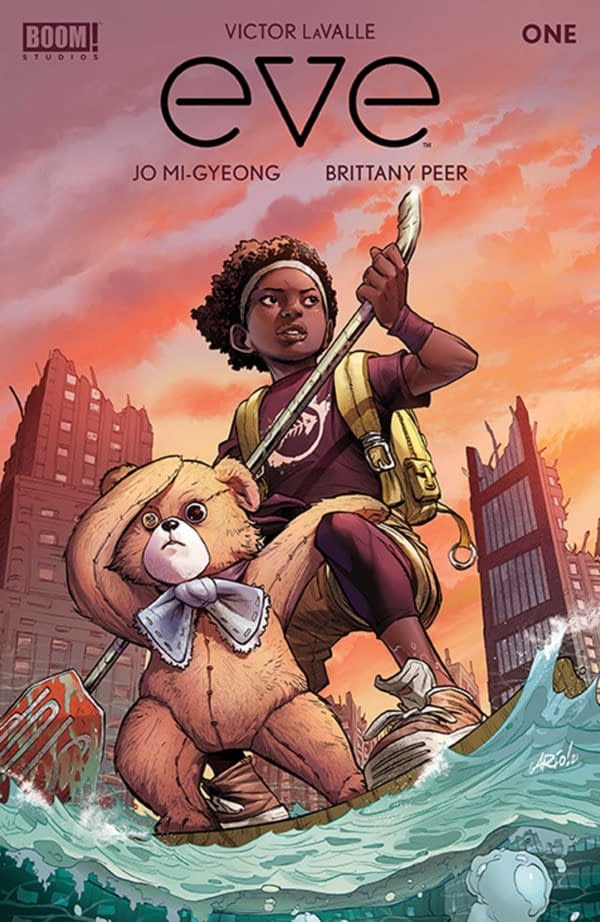 Review by Hannibal Tabu
8.5/10
A strong science fiction showing from Victor LaValle with the costs of our environmental indifference coming due.
Credits
V
V
B
B
A
A
B
B

Earlier this week, Bleeding Cool reported on the release of a digital Marvel Unlimited exclusive return of Al Ewing to Rocket Raccoon for today, Strange

Joshua Dystart tweeted yesterday "Underground cartoonist Aline Kominsky-Crumb has passed away. She was 74 years old. She did not give a fuck in all the

Nickelodeon's Are You Afraid Of The Dark? Turned Into Graphic Novels

Abrams’ Amulet Books imprint has picked up rights to publish graphic novels based on old Nickelodeon kids horror TV series Are You Afraid of the Dark? The

Wesley Snipes Brings The Money in The Daily LITG, 2nd of December 2022

Just earlier this week, we were asking: What's next for Oni Press? Well, in a major shake-up for the industry (and Bleeding Cool Power List if I ever do