Borrowing a literal page from Dora The Explorer, The Flash #776 seeks to rely on the reader's input in a much less engaging way than a Choose Your Own Adventure book. Along the way, this calls for a less than robust plot limited by its shtick and subpar in the final analysis.

The Flash and Doctor Fate are caught in a two-dimensional In Between space and being pursued by anonymous demons and nameless monsters. Their salvation hinges on them breaking the fourth wall — and maybe it would have been more interesting if it was breaking the Source Wall — to overcome a number of challenges. It's almost a wonder they didn't run into Gwenpool in there.

Whether or not writer Jeremy Adams was watching a lot of children's television when this idea came up may be beyond our ability to know. However it happened, the same limitations caused by television characters eagerly looking out to the viewer and exhorting vague instructions happens here. If you ignore the plot's crucial final twist here and just turn the page, you have to take it on "belief" that the other readers did it and saved the day. For the person going along with whatever their entertainment tells them to do, it's a form of engagement. For the person simply sitting and watching (or reading in this case), it's all very facile, juvenile, puerile, and generally kind of sad.

That's not to say that Fernando Pasarin, Matt Ryan, Jeromy Cox, and Rob Leigh didn't do all they could to gussy up this deflated, lead balloon of an idea. The character depictions are sharp and creative, the colors are vibrant and clear, the lettering … well, now you think about it, that is kind of odd because when the book is "sideways," the words are right side up, but when it's "upside down," the letters follow … which doesn't make any sense. In either case, they tried hard, but this entire issue would make any user experience designer cringe with discomfort.

The silver-aged aspirations of this current run are apparent. Still, without the contextual landscape of that kind of vibe being de rigueur (which would be the wheelhouse of characters like Ambush Bug, for example, as seen in the current Suicide Squad run) or at least the visual indicators of this being a "kids" book, the final product ends up coming off tone-deaf. RATING: NO. JUST … NO.

The Flash #776
By Jeremy Adams, Fernando Pasarin
Doctor Fate arrives to whisk the Flash away to the IN-BETWEEN, a two-dimensional causeway filled with demonic forces. Now it's up to YOU, the reader, to help the Scarlet Speedster make his way through the dangerous dimension toward his final destination and the beginning of a brand-new adventure! 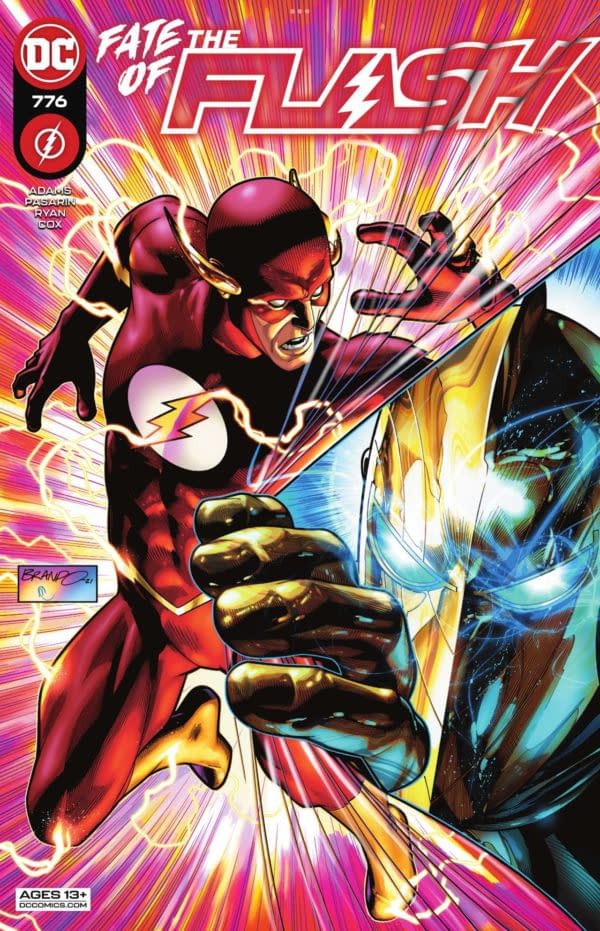 Review by Hannibal Tabu
4/10
Apparently, only you can affect this story! However, does that mean that if you don’t care, and the heroes survive anyway, nothing means anything at all?
Credits
Editors
Mike Cotton, Chris Rosa

Today's Superman '78 #6 recalls a scene from the original Superman movies, with Metropolis the victim of Kryptonian super-breath, with everyone being

Kid Eternity To Get A Big Role In Upcoming Justice League Dark?

Recently, Bleeding Cool noted the return of Kid Eternal to DC Comics continuity, working as a coroner in the police morgues of Gotham. In today's Justice

Rewriting Origins And Other Batman Continuities In Today's DC Comics

It's not just Catwoman who gets a new comic book origin story playing out in DC Comics titles today. There are a lot of Batman-relevant continuity points

A New Origin For Catwoman From DC Comics, Today

Today, DC Comics has published the Batman/Catwoman Special by Tom King and the late John Paul Leon, with Mitch Gerads and friends completing the comic