With a healthy respect for the source material that made it possible while injecting a new sense of immediacy to the proceedings, Hardware #1: Season One is a very strong offering that clearly establishes that this ain't just a chocolate-coated Iron Man. Delivering an authentic voice that's looking forward and not back, this issue delivers.

Curtis Metcalf is a genius — literally, everyone in this book admits to that fact. He was plucked out of inner-city obscurity; his six postgraduate degrees and vast professional output were funded by Edwin Alva, a billionaire industrialist with an eye for talent. Alva, of course, is also wholly, irredeemably evil (though "billionaire" may have given that connotation for many already), and when Metcalf asked (off-panel, described) for a greater share of the profits of his intellect, Alva condescended, chided and denied these ambitions.

Alva also enabled the cutting of many corners to make the experimental tear gas that created an event called The Big Bang, where a Black Lives Matter protest was gassed, giving many of the people around superpowers (if not doing it himself, that's not clear yet). Who did Alva find to pin this atrocity on? Why, Curtis freaking Metcalf … except when Metcalf gets wind of it, out comes the backup plans and the property damage, and we're off to the races.

This diverges from the source material by directly tying together Alva Industries and the Big Bang in a new way and drops the whole of it on Metcalf's shoulders. This drastically enjoyable Brandon Thomas script uses dialogue to succinctly reveal things while moving the action along and the art … spirit, the art. The masters are at work here, with longtime friends Denys Cowan (a Milestone founder) and Bill Sienkiewicz (a legend in his own right) have lost none of the dynamic intricacies of their artistic partnership. With colors by Chris Sotomayor and perfectly presented lettering by Rob Leigh, this issue clicks on every level.

As before, this wonderful work frames the Milestone universe in its best possible light and does the impossible: presents a new direction from an older story, done with modern dynamism. RATING: BUY.

Hardware #1: Season One
By Brandon Thomas, Denys Cowan, Bill Sienkiewicz
Curtis Metcalf was the brightest shining star of Alva Industries, a brilliant scientist mentored by Edwin Alva since childhood — until the failures of Alva technology at the Big Bang disaster threatened to destroy the company, and Alva needed a scapegoat. Now Curtis is on the run from the Dakota police department, but a man as smart — and paranoid — as Curtis takes precautions. With a nearly indestructible suit of armor and remarkable inventions that he never handed over to Alva, Curtis stands determined to do much more than clear his name — he's going to take the fight back to Alva himself! Writer Brandon Thomas (Future State: Aquaman, Excellence) is joined by Hardware's co-creator and Milestone founder Denys Cowan to open a legendary new chapter in the story of the Milestone Universe's most complicated man! Is a better world on his mind? Or just a world built for him? 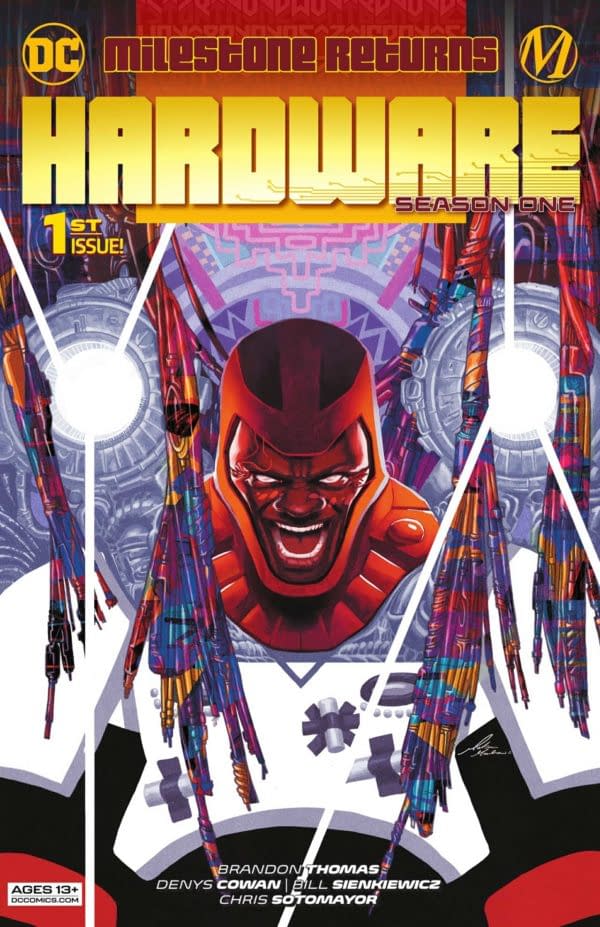 Review by Hannibal Tabu
8/10
Don’t call it a comeback as Curtis Metcalf is a man on the run and the whole Milestone universe is not enough to hold him back.
Credits
Editors
Chris Conroy, Amadeo Turturro, Marquis Draper

Captain Marvel sends Moon Girl to the moon to track down Devil Dinosaur in this preview of Avengers and Moon Girl #1... but it's after bedtime!

The Rare Debut of Lightning Girl & Other Lightning Comics, at Auction

With Lash Lightning captured in Lightning Comics v3 #1, he was able to transfer his powers to Isobel Blake, who became Lightning Girl.