A demon in a child's body has been spreading horror for more than a decade, and it all happened because of John Constantine. Now, with wildly improvisational ideas and a bit of common magic, in Hellblazer: Rise and Fall #3 the Hellblazer has to wrestle with his past to make sure the devil gets his due, which is a good thing for a change.

Tom Taylor has written a finale to this story that is irredeemably evil, meant in the best possible way. This plot's twists and turns are like a swinging straight-ahead jazz song, impossible to predict but deeply enmeshed in craft. Likewise, Darick Robertson is an old hand at blasphemy, aided ably by DIEGO Rodríguez and Deron Bennett, making this spiritual crisis tangible in moments of quiet terror over a candy dish in times much more suited to the stylings of Michael Bay.

There was a bit of a kerfluffle online last issue about the idea of everyday British cops having guns, which could mean that either this United Kingdom is different from the one enmeshed in Brexit (in which case it doesn't matter) or that these cops have been armed under the very specific circumstances of this story. For anyone brought up on the westernized cop-aganda so prevalent on television, that's a minor quibble. The fact that this issue, alone, costs seven whole American dollars, however … in a pandemic? In this economy? Yikes.

That said, there are some truly amazing moments — in a bar bathroom, outside a childhood home, in a park — that make this a pretty engaging book. Perhaps as an original graphic novel that could be absorbed in one sitting, the cost per page could be ameliorated. RATING: HONORABLE MENTION. 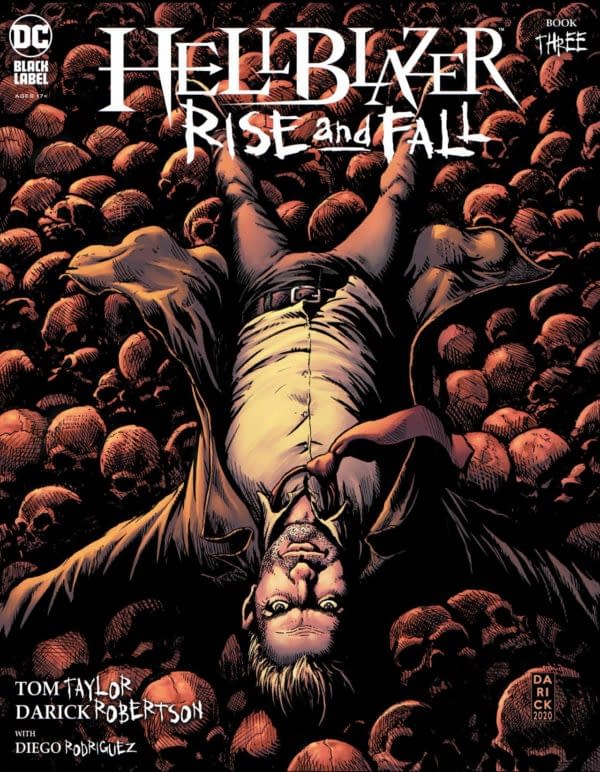 Review by Hannibal Tabu
7.5/10
John Constantine can’t save everybody, but to save perhaps the first soul he damned, can he channel the magic of his own upbringing to stop a demon?
Credits
T
T
D
D
A
A
A
A
D
D