With solid timing on the heels of the Loki Disney+ series, Kang the Conqueror #1 is a character piece that digs into the forging of the chronal criminal and framing the concept for readers new and old. While the cinematic version may have differences from this take, the roots of the concept remain clear for both interpretations and are presented enjoyably here by the creative team.

Nathaniel Richards was born in an idyllic 31st century with no mountains left to climb; no wonders left to discover, a genius intellect bored out of his mind. Romanticizing the struggles of the past like a Civil War reenactor, he devises a means to travel to the past, only to encounter the first person he'd consider important: a future version of himself.

Writers Jackson Lanzing and Collin Kelly develop this brutal mentorship, hidden in the shadow of an apocalypse (not En Sabah Nur, more like Roxxcart or Lamentis-1) with great detail that plants seeds for the villainy to come. The artwork from Carlos Magno, Espen Grundetjern, and Joe Caramagna is lush and immersive, dropping the reader in the middle of science fiction futures and prehistoric landscapes with equal clarity and effect.

If the last page is to be believed, and this is all set up a tour of various variants, it's less engaging. Likewise, if you're looking for Jonathan Majors, you will be sorely disappointed. However, the central character's struggle is very effective as a character study, which gives you an era-spanning yarn that keeps your attention. RATING: HONORABLE MENTION.

Kang The Conqueror #1
By Jackson Lanzing, Collin Kelly, Carlos Magno
THE ORIGIN OF KANG! The man called Kang the Conqueror has been a pharaoh, a villain, a warlord of the space ways and even, on rare occasions, a hero. Across all timelines, one fact seemed absolute: Time means nothing to Kang the Conqueror. But the truth is more complex. Kang is caught in an endless cycle of creation and destruction dictated by time and previously unseen by any but the Conqueror himself. A cycle that could finally explain the enigma that is Kang. And a cycle that begins and ends with an old and broken Kang sending his younger self down a dark path. 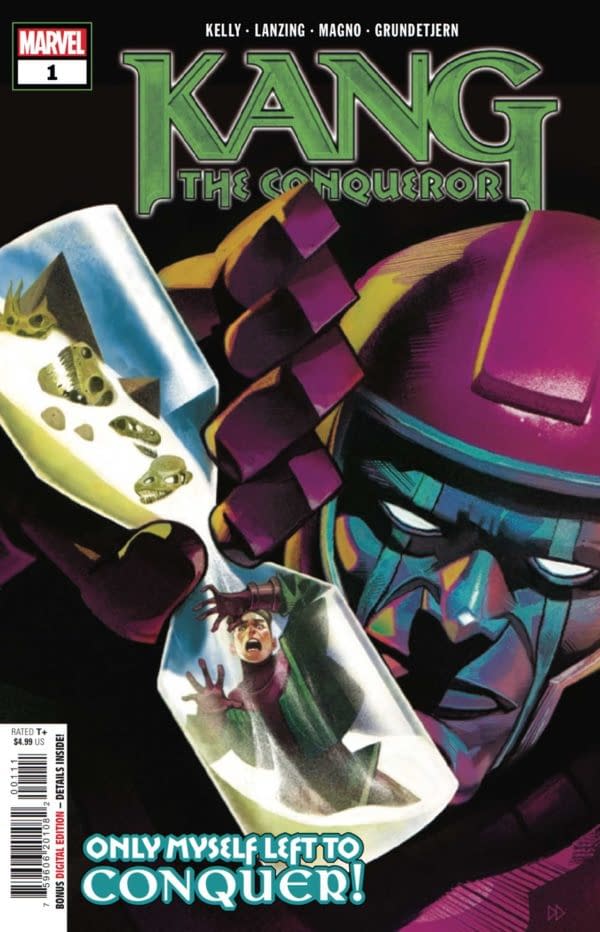 Review by Hannibal Tabu
7.5/10
Take some time to get to know the Kang before the conquering in an era-hopping origin story that digs deep into character.
Credits
Editors
Akira Yoshida, Alanna Smith, Martin Biro

Is Bob Phantom creating the crimes he reports he's stopping in this preview of Bob Phantom #1? Does he want a job at Bleeding Cool?

When Image Comics was just starting out and books were shipping late, they used to keep the reader - and specilatoir - interest up by putting out ashcans.

Will Jay Nakamura Remember That Jon Kent Is Superman? (SuperSpoilers)

Superspoilers. After our friends at Comic Book got word from their media partner DC Comics that Superman's Clark Kent and Jon Kent will be getting their

Ash knows one thing in this preview of Army of Darkness vs. Re-Animator: Necronomicon Rising #5... if it comes back from the dead, blow its head off.

Today sees Superman returning to Earth, and catching up with what he's missed, in Action Comics #1050. You know, just before he is whisked away to die at