Ooh, that's a thing… Marvel's Eternals have fought against Deviants from Jack Kirby's comic book onwards. All manner of folk have been retroactively declared Eternals, such as Thanos and Eros. But now it seems, according to Druig of the Eternals at least that all mutants are Deviants as well… and they aren't just talking about whatever Logan gets up to with Scott and Jean.

What else? Previously on Bleeding Cool – Irene Adler, or Destiny, has the mutant power to see the future. And we know from Civil War 2 just how much Tony Stark hates that. And in the upcoming X-Men, Avengers and Eternals crossover Judgment Day, it looks as if war is coming… Civil War 3?

What we had heard previously… Bleeding Cool was first to notice (on Christmas Day of all days) that Marvel Comics had something called Judgment Day coming. A crossover event featuring the Avengers, the X-Men and the Eternals and, probably, involving Jason Aaron and Kieron Gillen a lot. And with this tweet, it seems that Tony Stark is making plans beyond just getting married to Patsy Walker.

"Speaking broadly, I'm pro-hubris. But… how on earth do you think we're going to make a god in a few hours?" – Tony Stark

This is likely to kick off with the X-Men/Avengers Free Comic Book Day comic in May, and the Judgement Day Is Coming labels have been applied to the Marvel Previews catalogue comics from April onwards. 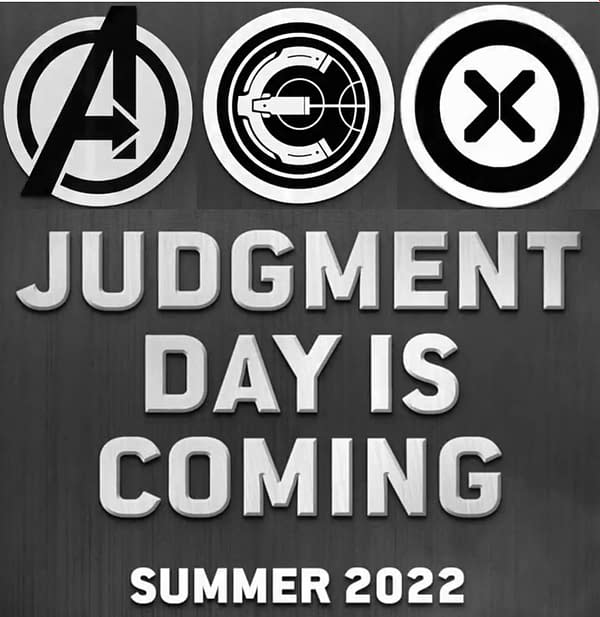 ETERNALS #10
KIERON GILLEN (W) • ESAD RIBIC (A/C) •
The Eternals are on a pilgrimage together. Well, depends on who you ask — for it's not so much a pilgrimage…and more like breaking and entering into Avengers Mountain. But what the Avengers don't know won't hurt them…right? 32 PGS./Rated T+ …$3.99

X-MEN #9
GERRY DUGGAN (W) • Javier Pina (A) • Cover by Pepe Larraz
The Quiet Council of Krakoa. The Great Ring of Arakko. The Central Column of Orchis. Three ruling bodies, all about to make vital decisions that will affect their people for years to come…and the X-Men are caught in the cross fire. 32 PGS./Rated T+ …$3.99

IMMORTAL X-MEN #1
Kieron Gillen (W) • Lucas Werneck (A) •
IN THE QUIET COUNCIL, NO ONE CAN HEAR YOU SCREAM!
The Quiet Council rules the Krakoan age, for better… or worse. Now, shaken by INFERNO and X LIVES / X DEATHS OF WOLVERINE they strive to hold together, no matter how much they want to tear each other apart. Writer Kieron Gillen (UNCANNY X-MEN, ETERNALS, The Wicked + The Divine, Die) returns to the world of X with artist Lucas Werneck (TRIAL OF MAGNETO) to bring us all into the room where it happens. "It" being "the most powerful people on Earth deciding the fate of the whole planet." Prepare for sinister secrets to be revealed and learn that some secrets are more sinister than others… 48 PGS./Rated T+ …$5.99

AVENGERS #54
JASON AARON (W) • JUAN FRIGERI (A) • COVER BY JAVIER GARRÓN
INFINITY SAGA PHASE 2 VARIANT COVER BY DAVID NAKAYAMA
CARNAGE FOREVER VARIANT COVER BY GREG SMALLWOOD
DEADPOOL 30TH VARIANT COVER BY ROB LIEFELD • FORESHADOW VARIANT COVER BY TBA
Doctor Doom and his Multiversal Masters of Evil have come hunting Deathloks. And now there's only one Deathlok left, trapped inside the rubble of a besieged Avengers Mountain. Just in time for a new group of Avengers to rise from the ruins, with new members and at least one Avenger having been wildly transformed. And just who is the cosmic general who commands the Deathloks, the mysterious Avenger Prime? 32 PGS./Rated T+ …$3.99