With a must-see ending and very clever plotting along the way. The Nice House On The Lake #4 flips a kind of sociological experiment into a brilliant game with an unexpected player leaping to the forefront. This bold, brilliant work is of enormously high literary quality and, amazingly, has provided a full-fledged narrative of each issue thus far.

Twelve people were invited by their friend Walter to vacation in Wisconsin at a luxury home. Some knew each other in different stages of education, some as adults drinking in New York City bars, but Walter was the connective tissue. However, Walter was an alien and set them all aside as his people set the world on fire, essentially murdering humanity, while these twelve were left in abject luxury to consider the aftermath. This issue focuses on "the comedian," a man named David who uses his professional skills to act as a kind of detective.

After a week, boxes of food and supplies start mysteriously appearing on the front porch along with a notepad. Pretty much anything the guests want can be written on that notepad, and it'll show up shortly. If you rip off a sheet, they can make private requests that will arrive with their symbol. David very shortly becomes the mailman, using these deliveries as a chance to catch up with everyone … and pay attention as well,

Looking at some of the most effective comedians — Mooney, Wright, Rivers, Ajaye — their keen observational skills are what allowed them to dissect situations with such intimate detail. David says of his friendship with Walter, "I liked that he saw that I saw more than I let on. Like, he knew I was smarter than I acted. That I picked up on stuff." This wonderful character element, delivered near the beginning of James Tynion the Fourth's script, created room for a wonderful, inevitable, surprising conclusion that really nailed it here.

The design choices in the artwork from Alvaro Martinez Bueno, Jordie Bellaire, and Andworld Design wonderfully captured moments of respect, anguish, cleverness, boredom, and confusion in turns. There is one page that's solely in the hands of Andworld Design, and it's an emotional gut punch.

There are no capes, no masks other than the lies we tell each other and ourselves, but public perception be damned; this is some of the best things that can be done with comics. RATING: BUY.

Nice House On The Lake #4
By James Tynion the Fourth, Alvaro Martinez Bueno
A terrifying truth about the house is revealed! David wants nothing more than to make his fellow residents of the House laugh. He's the Comedian, right? That's what he does. But if no one's in the mood to laugh, then perhaps it's time for him to perform the other function of comedy: to tell his audience an unbelievable truth!

Nice House On The Lake #4 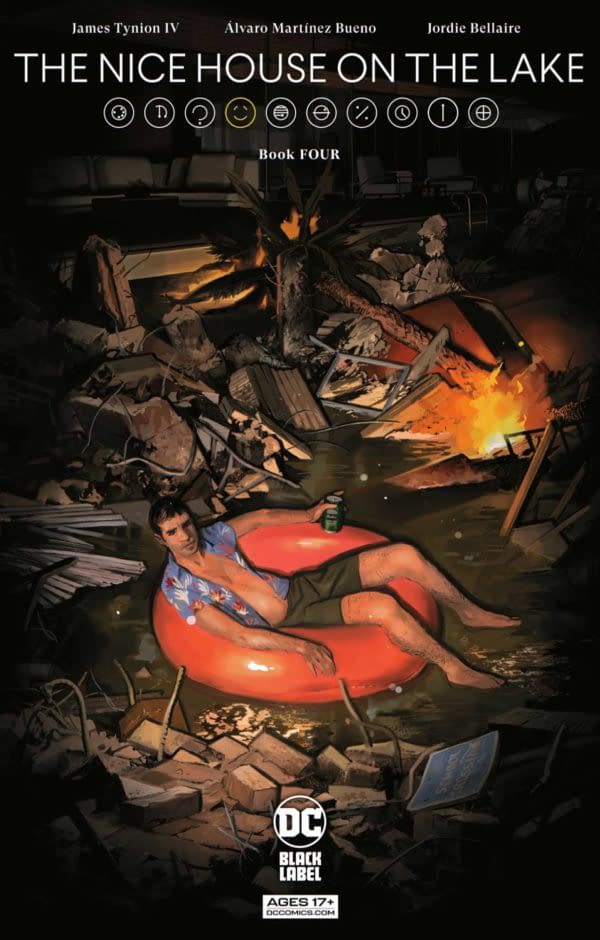 Review by Hannibal Tabu
8.5/10
Laugh it up as a man with a mission for mirth makes a discovery that literally changes the entire freaking game.
Credits
Editors
Chris Conroy, Marquis Draper