There is a long-honored trope in fiction about "the man on the wall," one charged with the defense of all that matters who has to make impossible choices and do unthinkable things, in S.W.O.R.D. #2, the mutant nation of Krakoa has decided that they want Abigail Brand as that person, heading a complex and potentially internecine crew of super-powered people looking to defend the mutant nation (and the world) from threats beyond the stars.

Unfortunately, they're in the middle of a crossover that has literally every name you know on their back heel. The King in Black, the god of symbiotes named Knull, has wrapped the entire planet in the skin of a Venom-like symbiote, blocking the sun and putting the world's populace to the sword. For Brand, that just means "bring out the really big plans," so she enacts something called "Protocol V," which is "the survival of humanity in the face of planetary genocide." Yes, that didn't say "the way to beat Knull" or even "the way to win over any opponent." It says what it says, and she charges one of the least regarded mutants around with its execution " because thinking the unthinkable is what I do every day ."

Al Ewing's writing is realistic for a situation so wildly insane, and even characters like Fabian Cortez cannot fail to be true to their natures even as they do something magnificent (what he does and says after "Allow me" really made an impact). Likewise, the visual storytelling in S.W.O.R.D. #2 from Valerio Schiti, Marte Gracia, and Ariana Maher delivers the threat and the hope bursting from the pages with great effectiveness.

While the details were very impressive, the whole package is again dragged down by a threat that's absolutely without distinction, an antagonist that'd have to strain to be two-dimensional. There are great points, and the wall is well defended, but these elements don't do enough room to make a great book. RATING: HONORABLE MENTION.

S.W.O.R.D. #2
By Al Ewing, Valerio Schiti
WHAT IS PROTOCOL V? The S.W.O.R.D. station is thrown in at the deep end of a planetary crisis as Krakoa battles the KING IN BLACK! While a cross-division team take on latex dragons from outer space, Abigail Brand prepares a deniable operation all her own. What is PROTOCOL V – and can the Earth survive it? 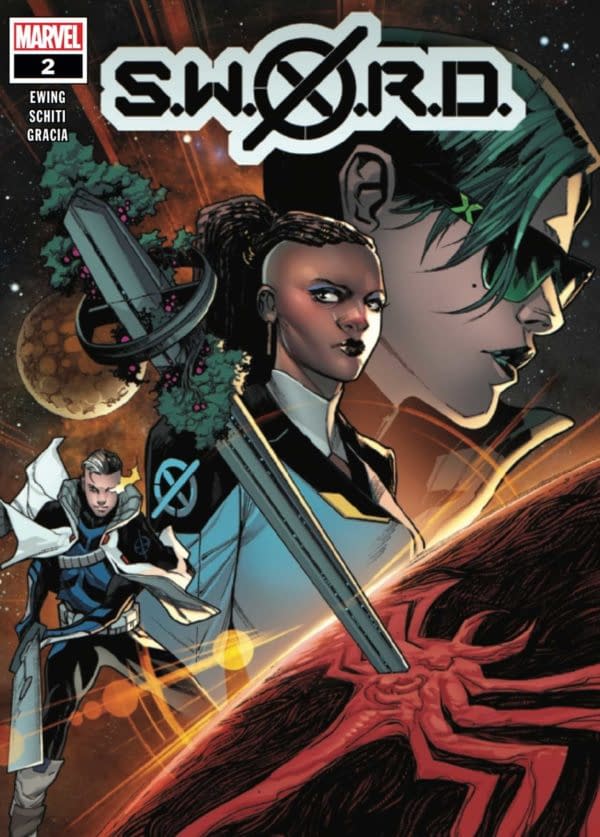 Review by Hannibal Tabu
7.5/10
The children of the atom take their hardest swing at the god of symbiotes. Will it be enough, or will Abigail Brand have to adopt more extreme measures.
Credits
A
A
M
M
A
A
J
J
M
M

Avengers #63 Preview: In This Preview, The Avengers… WILL DIE?!

Things aren't going so well for the current and prehistoric Avengers when they get fried by Dark Phoenix in this preview of Avengers #63.

The X-Men prevent Carol from killing Brood Rogue in this preview of Captain Marvel #44... but was it the right choice?

Batman must return to Earth in this preview of Batman #130. Unfortunately, he must do it with a boogie board instead of a spaceship.

In this preview of Thanos: Death Notes #1, Thanos creates the greatest sin of all. No, not murdering half the universe. Plagiarism!

The Flash family go shopping in this preview of Dark Crisis: War Zone #1. For weapons to kick some butt with.

In this preview of Immortal X-Men #9, for the first time in the history of comics, someone says "no" to a reboot."