The Six Sidekicks of Trigger Keaton #2 is a very engaging work that is a big, big surprise as an unlikely group of protagonists work for a goal most of them aren't even sure they want in a very entertaining way. This book sends up the TV industry, the concept of Hollywood, and the personalities of the characters, ending up engaging where all the numbers say it should be off-putting.

Trigger Keaton is one of the biggest names in entertainment, a larger-than-life figure that would make Chuck Norris or Arnold Schwartzenegger look like shy wallflowers, a rude, misogynistic, crass boor of a man who was loathed by virtually everyone who knew him. After he died under somewhat suspicious circumstances, six actors who played second banana to him came together to see if he was murdered, and if so, who did it?

This script by Kyle Starks showcases how one of Keaton's projects introduced a ridiculously rare car that becomes a pivotal element in this issue's plot. As an old rivalry continues to haunt these actors, a last will is read and executed with great comedic effect. There is one of the most thrilling chase scenes since Crowded. There are a lot of panels here and some very idiosyncratic line work from Chris Schweizer, but the style of the work makes it all very effective, and the color assists from Liz Trice Schweizer really help the key elements pop out and shine.

This book might sneak up on you with its cleverness and its engaging characterization, and you'll likely be happy that it does. RATING: BUY.

Six Sidekicks Of Trigger Keaton #2
By Kyle Starks, Chris Schweizer
Someone murdered Trigger Keaton, the world's most famous TV action hero. But to be fair, everyone kinda hated him. Now the plot thickens, the sidekick numbers increase, and the STUNTMAN WAR ESCALATES! And no one is ready for the BEST CAR CHASE EVER put to page going down! 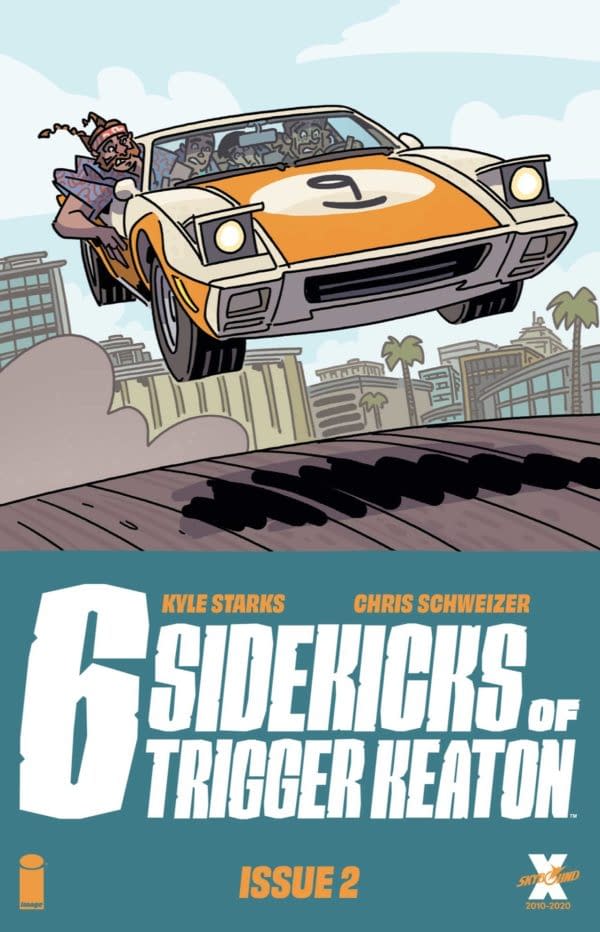 Review by Hannibal Tabu
8/10
War with stuntmen! A gripping chase scene! The most disgusting last will and testament of all time! Lots of wild stuff happens here, and you’ll wanna strap in for the ride.
Credits
Editor
Jon Moisan

Marvel is currently filming Secret Invasion in Halifax in the North of England, which has been making the national news here. I had previously reported