In Spider-Woman #13, Jessica Drew has an exciting life as she works both as a single mother to a precocious, powered toddler and continues her costumed adventures as Spider-Woman. Through a complex series of events, she snagged a disk containing all the secrets of the High Evolutionary intended to help her, her son, and maybe even her long-lost brother defeat a genetic affliction that could harm them all. The bad part is that an increasingly intense series of bad guys for hire are after the disk, and they aren't willing to play by the rules.

Much like her work in the recent Amazing Spider-Man Annual, this script by Karla Pacheco has a lot of fast-paced humor and even more fast-paced action. Likewise, the visual storytelling from Pere Perez, Frank D'armata, and Travis Lanham is gripping and fascinating to watch.

However, there are challenges here: watching Fireball and Bruiser show up and get, basically, smacked around while running through a ridiculous and increasingly labyrinthine set of challenges is cute, but not really the most engaging thing going because the stakes are fairly abstract — the data on the disk is one step removed from the fates of the people, and it's data, it can be copied. As such, watching these somewhat slapstick super-heroics is interesting but not wholly engaging. This is a solid comic book, with well-done applications of craft from everyone involved, but its confectionary tone belied the seriousness of its subject. RATING: HONORABLE MENTION.

Spider-Woman #13
By Karla Pacheco, Pere Perez
THE MOST ACTION-PACKED SPIDER-WOMAN ISSUE YET! A who's who of Marvel Mercenaries want something that Jess has (and NEEDS), so Jess has to fight Lady Bullseye and more to secure this treasured possession. This fight will take Jess across NYC in the most intense, issue-long action sequence you've ever read! 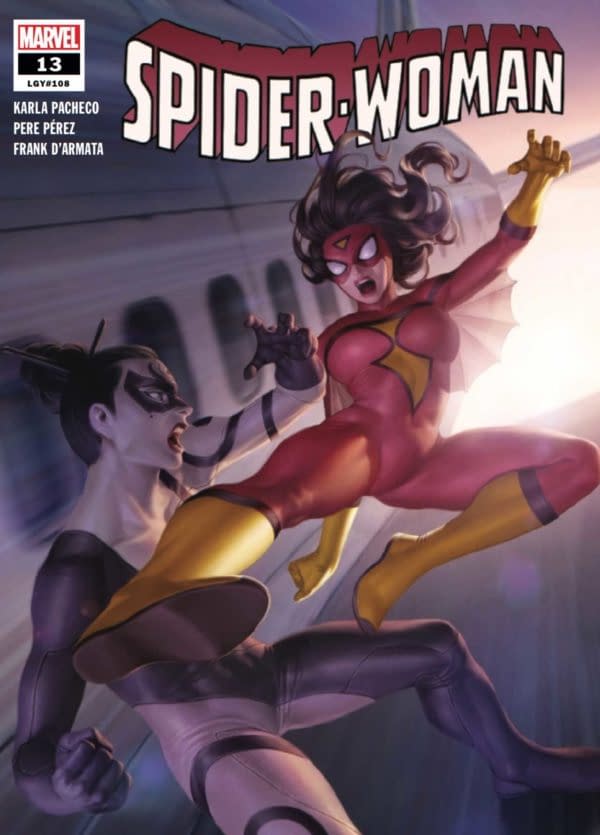 Review by Hannibal Tabu
7.5/10
A lighthearted take on home invasions, mercenaries, and property damage for Jessica Drew as she faces off against … well, who it is doesn’t really matter at the end of the day.

Preview Hollow, the Queer YA Take on The Legend of Sleepy Hollow

Steve Borock, is the co-founder and Head Grader of comic book grading company CBCS. Or rather, he was. Borock ended his employment with CBCS at the end of

Z2 Comics has announced a collaboration with “Weird Al" Yankovic to publish The Illustrated Al: The Songs of “Weird Al” Yankovic, with over twenty songs

As Bleeding Cool promised, the new Punisher series by Jason Aaron and Jesus Saiz, is doing a Punisher; Born Again.  Issue 1 saw him established as the new

The Return Of Motormouth To Marvel In Captain Carter

In Captain Carter #1 a couple of months ago, by Jamie McKelvie and Maika Cresta, we met Peggy Carter's new neighbour in modern-day London, Harley. And

Did Thor Get Hulked Or Did Hulk Get Thored? Welcome #THULK (Spoilers)

The upcoming Thor #26 to follow today's Hulk #9 has quite an arresting cover for fans of both the Hulk and Thor, as part of their Hulk/Thor Banner War