The central thesis of Strange Adventures #9 purports that Adam Strange is a hero. This argument, put forth by the kind of westernized talking heads that claimed that the pandemic would be over already, is one from a position of bad faith and rhetorical fallacies, and as such, the narrative takes it on the chin.

The Justice League released an investigative report (compiled over many issues by Mister Terrific, who learned an alien language and had militarized Rannians try to kill him) implying that Adam Strange committed, essentially, war crimes in a Rannian struggle against a largely undefeated extraterrestrial race called the Pykkts. For context, the Pykkts have apparently attacked Phoenix, Arizona, as a kind of first strike. Adam's Lady Macbeth-ish wife Alanna finds this report a mild inconvenience ("We've gotten through worse, Rann knows") despite this essentially kicking Adam out of the League. Adam, however, is incensed and goes to Batman and Superman for answers that they do not have in return.

The bad faith argument put forth by Alanna and subsequently, a pair of pundits (Ellie and Bryan) speaking from positions of privilege and inexperience is this:

BRYAN: "I don't know much, but I know I trust whoever hates the Pykkts the most."
ELLIE: "It's now clear as night and day."

Now, let's remember Adam — a fairly ordinary guy with a gun and a jetpack, comparatively — was the sole arguably extranormal operative in this science fiction war, and he was just barely above average. That's what the situation was on Rann. On Earth, by comparison, at any given time, there are three or four Kryptonian-class bruisers flying around, seven Shazams, six Green Lanterns, at least three speedsters, Wonder Woman, Martian Manhunter, and the template for multiple universes worth of terror, Batman. Adam Strange isn't even the best prepared or most dangerous person in this comic book, let alone on the planet, so this overwhelming show of confidence for him is at best baffling and at worst the disingenuous ranting of liars.

Can characters lie? Sure. Could even Alanna put forth an intentional lie? Maybe. However, this almost Bizarro-scented presentation of "the report and the Justice League will let the earth fall to a fairly homogenous group of aggressors who don't even have a single speedster" after Darkseid has been put on his back multiple times, presented by people who should theoretically not be locked up in Arkham … just no. How are these guys worse than Thanagar, which at least has a grillion jerks who can fly and use magic space metal?

Once we get by that, let's deal with the actual issues with the plot. The events of this issue, as many previous, happen in multiple time periods. In the past, Adam deploys chemical weapons and clandestine tactics to kill a lot of Pykkts. Okay. In the present, Adam takes a call, flies around, and is mad at his "friends" while Mister Terrific broods, Alanna goes on TV, and the everyday chaos of superheroics happen. That's it. That's the book.

Alenna Strange deserves better, and frankly, so do you. RATING: NO. JUST … NO.

Strange Adventures #9
By Tom King, Mitch Gerads
The Pykkts are attacking Earth. As the only warrior in all the cosmos to ever defeat them, Adam Strange leads the planet's mightiest heroes in all-out war! The only thing is, evidence is mounting that Adam's victory on Rann may not have been everything he says it was. There is time unaccounted for, circumstances left unexplained. Even Batman has started to wonder about his friend. Sure, they are fighting side by side right now, but who will answer for all the things that got them here? Why, Alanna Strange, of course! It's time for the Rannian princess to go out and set the record straight. The hit series continues on a bimonthly schedule. 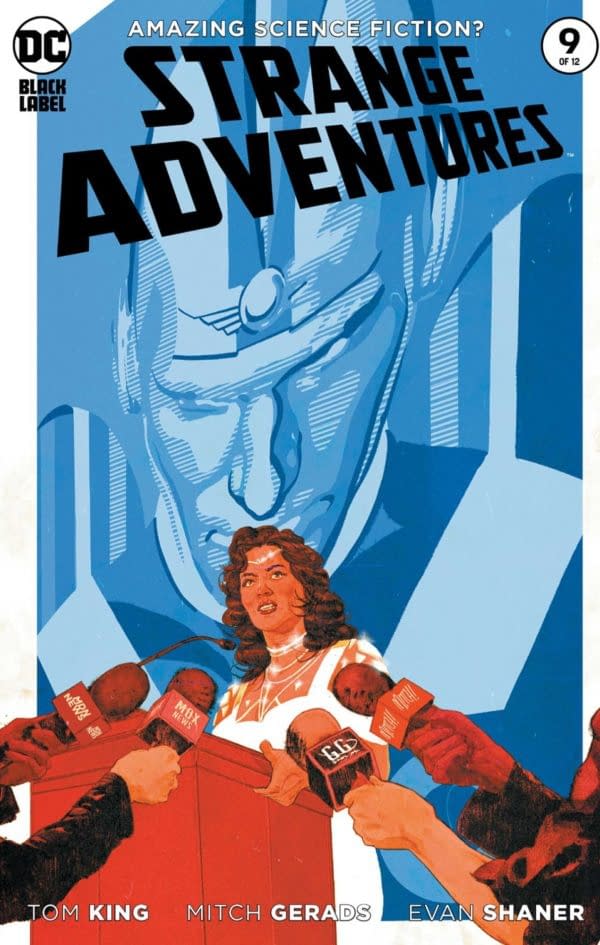 Review by Hannibal Tabu
4/10
False narratives, false indignation, false flags, and more falsehoods than a 2020 presidential press conference, what's most strange is how far it is from the truth.
Credits
T
T
E
E
J
J
B
B
D
D