Last month's Star Wars: Darth Vader #1 (getting a second printing today)  ended with quite the cliffhanger, revealing that Anakin Skywalker's wife and Queen, Padmé Amidala, was not dead at Vader's hands in Revenge Of The Sith, but alive – somehow. 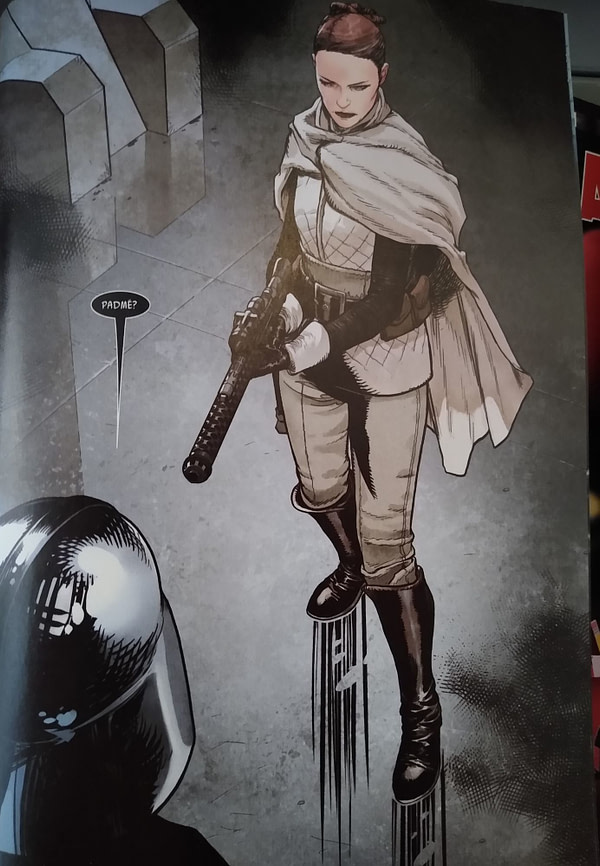 But how? A clone? And android? A Force-illusion?

No, something else. But, as promised, rewriting the events and characters of George Lucas' Star Wars prequels…

Sabé first appeared in the 1999 film Star Wars: Episode I The Phantom Menace, played by Keira Knightley, who casting director Robin Gurland believed bore a striking resemblance to Natalie Portman, who portrayed Padmé Amidala. Knightley's role was kept quiet by The Phantom Menace's marketing department in order to heighten the surprise of there being a decoy queen when the film was released and the queen's costumes were specifically designed to hide any height and shape differences between Portman and Knightley, so much in fact that even Portman's own mother couldn't distinguish between the two on set.

STAR WARS DARTH VADER #2
(W) Greg Pak (A) Raffaele Ienco (CA) In-Hyuk Lee
THE FACE OF THE QUEEN!
•  In the wake of the shocking revelations of The Empire Strikes Back, DARTH VADER continues his quest for revenge against everyone who hid his son Luke from him.
•  But when his search takes him deep into his past, he uncovers a hauntingly familiar face that will challenge everything he knows. Rated T In Shops: Mar 11, 2020 SRP: $3.99

Star Wars: Darth Vader #2 is out today from Marvel Comics… I bought mine from Piranha Comics in Kingston-Upon-Thames. Piranha Comics is a small south London comic store chain with a small south-east store in Kingston-Upon Thames's market centre, which runs Magic The Gathering nights on Fridays, and a larger south-west store in Bromley, which also runs Magic nights and has an extensive back issue collection and online store. If you are in the neighbourhood, check them out.

It never rains, but it pours. It's just gone 10 pm on the Tuesday before New York Comic-Con, and everything is a flutter. Here's a late-night look at some

Snyder & Francavilla's Night Of The Ghoul Out Tomorrow, Gets Film Deal

Yesterday, Bleeding Cool reported that Bad Idea Comics was promising to close up shop entirely if they raise $2.6 million on Kickstarter, as well as

Saucer Country was a rather good UFO mythology comic book by Paul Cornell, drawn by Ryan Kelly and published by DC Comics' Vertigo from 2012 in the final

Please Be My Star, a YA Graphic Novel Remake of Phantom Of The Opera

Please Be My Star by Victoria Grace Elliott, a is a new YA rom-com graphic novel and genderswapped contemporary reimagining of Phantom of the Opera

Of late, Neil Gaiman has become one of the hottest figures in modern-day fantasy fiction, with two successful TV series based on his writing currently in

Like many readers, Sabrina can't get over the trauma of a previous comic in this preview of World of Betty and Veronica Jumbo Comics Digest #19.

Christopher Columbus must die to prevent America from every happening in this preview of Earthdivers #1.

It never rains, but it pours. It's just gone 10 pm on the Tuesday before New York Comic-Con, and everything is a flutter. Here's a late-night look at some

Snyder & Francavilla's Night Of The Ghoul Out Tomorrow, Gets Film Deal

The Long-Running Tiger Girl Saga from Fiction House, Up for Auction

Tiger Girl was created by artist Robert Webb and her stories ran continuously from 1944 to the end of Fiction House in 1954.

Yesterday, Bleeding Cool reported that Bad Idea Comics was promising to close up shop entirely if they raise $2.6 million on Kickstarter, as well as