Studio Wildcard, creators of the multi-million unit-selling dinosaur title ARK: Survival Evolved, along with distribution partner Solutions 2 GO Inc., announced today that the survival-adventure game is in final production and is set for retail and digital worldwide launch on August 8th for Xbox One PlayStation 4, Windows PC, Mac, and Linux. The title is now available for preorder from select retailers, including a limited-supply Collector's Edition with exclusive physical items.

Jeremy Stieglitz, co-founder and co-Creative Director of Studio Wildcard said of the title:

"During the past two years, millions of ARK players have built gigantic bases, captured and trained armies of dinosaurs, crafted armories full of weapons and eaten billions of pounds of Jurassic creature-kabobs. With their help, we're about to reach the completion of core content for ARK: Survival Evolved and release the full game to the world! This is just the beginning of the next phase of our journey. For those players who were excited with every update during Early Access, ARK's going to become even more fun with surprise new content at launch & beyond, as we will continue to have a staggering amount of additional gameplay, creatures, and story elements in the works."

You can watch the launch date trailer below.

ARK: Survival Evolved is currently the best-selling game in the history of Steam's Early Access program. In North America, there are three ways to get your dino-fix with ARK: Survival Evolved, all of which are now available to pre-order for PlayStation 4 and Xbox One platforms:

ARK: Survival Evolved ($59.99 USD)
This base game includes everything a burgeoning Jurassic adventurer needs to get started in the world of ARK. It's the core game, and all free content released up to this point, offering up hundreds of hours of gameplay to players.

ARK: Survival Evolved – Explorer's Edition ($99.99 USD)
The Explorer's Edition takes the base game, and adds even MORE – introducing a Season Pass that will grant access to all expansion packs, starting with Scorched Earth (available now) and including more packs launching later this year and into 2018. 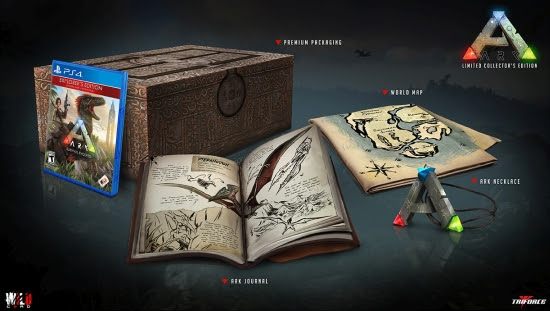 And then there's that first official mod. Get ready for the Ragnarok Map, as it's become the first official mod to be picked up by Studio Wildcard as part of its ARK Sponsored Mods Program! Developed by the former creators of popular ARK mods Valhalla and Umassoura, David Miller, Matt Janz and Jackson Lawrence came together to work on their latest project, Ragnarok which is being released for Steam players as a free new map.

Being an "official mod" means not only will it be available for PC players, but it will also be released as free DLC to PlayStation 4 and Xbox One ARK players in early July.

You can check that out below.