Batman: The Long Halloween, Part Two is the thrilling conclusion to one of Batman's greatest and most tragic cases. Part One was an enjoyable kick-off to this adaption, but it had the easy part. An adaptation that honored the original and left fans wondering not only will Batman deduce "Who is the Holiday Killer," but also, 'What will they change from the original story?" Will the identity of the Holiday Killer remains the same as the iconic story, or could it be someone new? WB Animation does like to take a chance and shake things up a bit (see: Batman: Hush, The Killing Joke), but this is by far the best adaption of a DC story that WB has ever released. Fans who love the original 13 issue arc of The Long Halloween and acknowledge how much it has influenced Batman stories after it (paging Chris Nolan) will enjoy WB Animation and DC's Batman: The Long Halloween, Part Two and agree. They did it. The crazy sons of bitches did it.

The iconic mid-1990s DC story was written by Jeph Loeb (Batman: Hush, Hulk: Gray) and Tim Sale (Batman: Dark Victory, Daredevil: Yellow), Batman: The Long Halloween is a cornerstone of Batman lore. The center of our tale features the triumvirate of justice – Batman/Bruce Wayne (Jensen Ackles), Police Captain James Gordon (Billy Burke), and District Attorney Harvey Dent (Josh Duhamel) – as they combine forces to solve the mystery of the Holiday Killer. Now, Part Two completes the two-film journey of a classic DC story in the new universe. It could be called "The Long Defeat of Batman and the Tragic Fall of Harvey Dent." Part Two begins with a missing Batman while Bruce Wayne is giving his fortune over to Carmine Falcone. Catwoman steps in to break poison Ivy's spell, and Falcone overreacts by hiring Gotham's worst villains, while the mysterious Holiday Killer is still on the loose. Meanwhile, Harvey Dent is being pulled in two directions trying to stop a mob war and attempting to fix his troubled marriage to Gilda. The acid attack that scars Harvey snaps his mind, and he is unable to control the duel personalities raging within him. Now calling himself "Two Face," now in control, Dent decides to punish everyone responsible for his hideous transformation, and those who've betrayed his family, and Gotham. Can the Caped Crusader untangle the cacophony of tragedy that converged to create Two-Face, the Holiday Killer, Batman, and Gotham City itself?

Fans know how the scenes and bits of dialogue that has been borrowed from the original story in other media, but now we are getting the whole enchilada. An iconic tale that defines not only Batman and his allies but Gotham itself. Writer Tim Sheridan had the unenviable job of distilling a 13 issue arc and its subplots while adding his own touches, b- stories, and red herrings. It's a matter of trying to keep things exactly the intent of the story while not screwing up anyone's childhood. To honor the original, Sheridan definitely fleshed out certain things that were there in one panel or two, but it definitely meant more in the finished script for the screen. Some changes are necessary for the pacing of the story, so if you're reading along with the original, there will be some differences. However, these subtle edits and additions stand up and elevate the original story just as you are thinking, Hey, why would they cut that?" what you get back in return- story, action- more than makes up for the edit. Side note: This is by far the best portrayal of Two Face. Maroni scarring Dent in court with the acid and his bi-polar transformation plays out better than any depiction of the character thus far.

The art and animation are off the charts. Contrasting his brighter approach to Superman: Man of Tomorrow Butch Lukic's designs absolutely hit the cinematic film-noir mark. His vision has masterfully weaved this iconic mythos into what will ultimately be a new Universe or Dimension of DC heroes. The rooftop confrontation between Batman and Falcone is exquisite in design and execution. Hand-painted backdrop paintings by Robert Haverland and his team look as if they are directly lifted off the original page. The killing of Vitto Maroni and the Fourth of July scenes are also accentuated by Lukic's subtle lighting touches and deserve to be seen on a large screen format.

Jensen Ackles is finally cast in his dream role. Since playing Jason Todd in 2010s Under the Red Hood, Ackles had made it no secret that he wanted a shot at the cowl. Batman: The Long Halloween, he knocks it out of the park. Similar to Adam West and Bruce Greenwood before him, his transition from Bruce to Batman is a more subtle change in tone, rather than growling and swearing. Ackles' performance evolves into a more layered and emotional interpretation of a Caped Crusader early in his career.

Josh Duhamel's performance as Harvey Dent is a very slow roll from stoic District attorney, trying to save his marriage to finally letting a completely unhinged Two Face take the driver's seat. With the luxury of two movies, Dent's descent into madness has time to breathe. There is a lot of range in this performance, with Dent's cracked psyche quietly breaking thru until he finally losses control. Duhamel plays two sides of the same coin, similar to Batman but growling in his change, as his appearance and mind are split in two.

Julie Nathanson is perfectly cast as Gilda Dent. There is so much going on with her, and it's not done in such a broad way that it distracts from her emotional stakes. Gilda is desperately trying to connect with Harvey but holding him at a distance. Nathanson plays her very quietly, never breaking her demur stature. Still reflecting a torrent of emotion bubbling underneath, she flawlessly holds the tone throughout the two movies until Gilda's tragic arc is finished.

Fan's familiar with Katee Sackhoff's normally rough voice, see her performance as Dec. Essen in Batman: Year One, will notice a softened and sultry take on Poison Ivy. Titus Welliver's gruff Bosch persona plays perfectly as crime lord Carmine Falcone, and David Dastmalchian can barely contain his absolute joy of being cast in a creepy and mildly disturbing performance as Calendar Man /Julian Day. The late Naya Rivera really brings a whole new, realistic dimension to Selina Kyle /Catwoman in these movies. Her voice fits this version of Catwoman like a, well, cat-suit. We are lucky we got her for these two films; her talent will be missed in future projects.

To be fair, everyone is great in this.  As good as this movie is, it is not perfect. It does have its flaws. The Long Halloween is known for Tim Sale's over-the-top moody art style, as much as Jeph Loeb's haunting story. Most "normal" characters, Bruce, Selina, Harvey, and Carmine, look as if they are animated versions of the comic, translated into Lukic's vision. However, Tim Sale's creepy over-the-top caricatures, in my mind, are the quintessential designs of Gotham's Rogues. Missing are the slightly terrifying visions of Two Face, Scarecrow, The Joker, and Poison Ivy. Catwoman has changed the most from slinky and sexy of Sale's designs to a more functional character model. I know they are creating a style for a bigger universe, a "Lukic-verse," but I was disappointed not seeing Sale's designs brought to life. Potentially harder to animate; however, they could have really made the movie for me. But don't worry; this quibble does not take away from the story and execution.

Some changes are jarring and might make long-time fans fold their arms and scowl. Some play and others don't, but you have to let this version of this story play out. It all comes together.

Batman: The Long Halloween, Part Two is the thrilling conclusion to a heartfelt adaption that kept me riveted until the final reveal. Wondering 'Will they, won't they" change the ending will keep viewers searching for clues until the credits.  Sheridan, Palmer, and Lukic glide along that third rail of original material and play The Long Halloween like a great jazz song. Focusing on the original tune, subtly working in their own notes, the team has created an adaption worthy of the original, perhaps even elevating it. The art, acting, and script all combine perfectly for a moody, film noir, cinematic experience. In the hands of a lesser artist, this bold attempt may have failed, but like a Brubeck song, this movie only gets better each time you play it.

Yes, some of the nuances are lost from the original, but Sheridan's writing and Lukic's vision make this interpretation stand on its own. Both films, Parts One & Two, still had the same intrigue and just as much of an emotional punch as the original until the end. Part Two firmly announces the "Lukic-verse," or whatever they will be calling this new animated continuity.

Will you solve all the clues and discover who the Holiday Killer is? Don't take my word for it. Check out and decide for yourself.

Produced by Warner Bros. Animation and DC, the feature-length animated Batman: The Long Halloween, Part Two will be distributed by Warner Bros. Home Entertainment on Digital starting July 27, 2021, and on Blu-ray beginning August 10, 2021.

Batman: The Long Halloween, Part One, is currently available on Digital and Blu-ray. 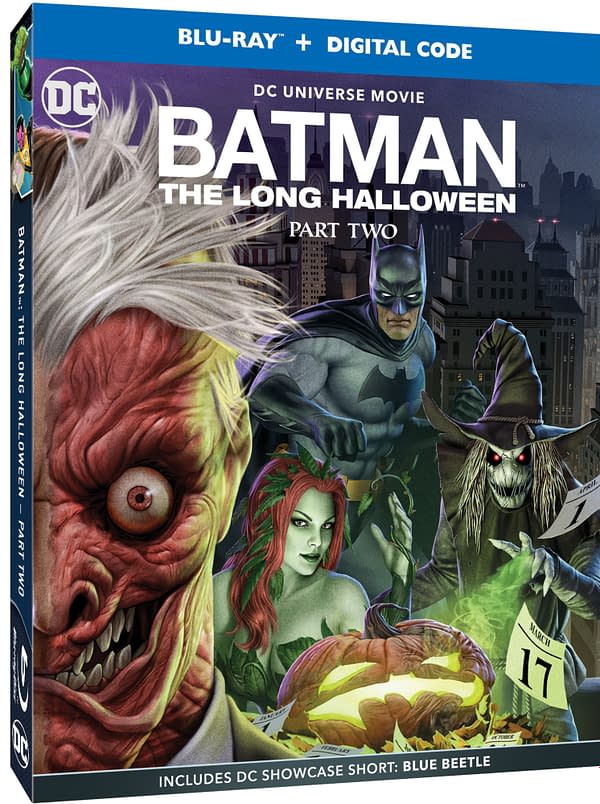 Review by Jimmy Leszczynski
8.5/10
Sheridan, Palmer, and Lukic glide along that 3rd rail of original material and play The Long Halloween like playing a great jazz song. Focusing on the original tune, subtly working in their own notes, the team has created an adaption worthy of the original, perhaps even elevating it. The art, acting and script all combine perfectly for a moody, film noir, cinematic experience. In the hands of lesser artist this bold attempt may have failed, but like a Brubeck song this movie only gets better each time you play it.
Credits
Produced by
Warner Bros. Animation
Produced by
DC
Distributed by
Warner Bros. Home Entertainment

Jimmy Leszczynski has been blurring the line between comics and reality at SDCC every year since 1994, and was a nerd long before Lewis, Gilbert, and the Tri Lamdas made it cool. Middle aged father of 2 that REFUSES to grow up, lifelong Bat-Fan, and he thinks he's pretty funny.

The CW was kind enough to pass along to Bleeding Cool an exclusive clip from this Sunday's Two Sentence Horror Stories S03E04 "Teatime."

With The CW's Two Sentence Horror Stories returning this Sunday, here's the Season 3 trailer and preview images for the first two episodes.

Uncharted Dev's Are Hopeful for a Sequel to the Movie

Uncharted might not be out yet, but that doesn't mean people aren't looking toward the future. The thing with Hollywood is that rarely are movies pitched

A new international poster for Turning Red has been released. The new Pixar movie will debut exclusively on Disney+ on March 11th.

Giveaway: Win A Blu-Ray Copy Of The Film Superhost