You don't need to have seen 1992's Candyman to enjoy Nia DaCosta's reboot, co-written and produced by Jordan Peele. In fact, in many ways, you're almost better off not having seen it (or it's terrible, nearly unwatchable sequels) since this version is built on a very different but adjacent engine.

DaCosta presents a beautiful, dark film with brilliant cinematography drowning in almost as much social commentary as the gallons of blood spilled, which is very much my shit. But the film trades in the franchise's basic conceit of who and what the Candyman is to be instead a much more straightforward slasher, mixed with some body horror. Some of this is good, but along the way, it seems to have lost some of the franchise's magic and makes it more of a mixed bag instead of the outright home run that it almost is. Because this ain't your grandma's Candyman.

Indeed, the film feels far more indebted to John Carpenter's Halloween with its precise economy, minimalist score, and workmanlike cinematography than to Bernard Rose's Candyman. However, repeated visual motifs of looking up into a cloud-covered skyline mimic and mirror the '92 film's opening credits and repeated motif of helicopter shots looking down on the city over its highways and skyline– a beautiful reminder that the film knows its roots but is intentionally choosing to blaze its own path.

This is even evident from the film's opening (and the story told in the trailers). The film opens talking about the Candyman of Chicago's Cabrini Green housing project– a hook-handed man in the 70's known for giving candy to the local children, wrongfully accused of putting razor blades in the sweets, and then murdered by the police. What the story unfolds (and finally links back to the portrayal by Tony Todd of Daniel Robataille, an artist in the 1890s who was brutally murdered by an angry mob of Chicago's white elite for daring to fall in love with a white woman) is a pattern of cyclical violence.

DaCosta's Candyman is more a malevolent spirit and force of nature, taking revenge for past injustices. Meanwhile, Tony Todd's portrayal in the past films that were much more Phantom of the Opera or Dracula: Tony Todd wanted to seduce you before he murdered you. DaCosta's Candyman DGAF and will murder every last (white) person who dares to summon him. And you will enjoy the hell out of watching these beautifully executed (no pun intended) scares and deaths.

It's sad to leave some of what made the original so unique behind, but what it trades in is in service of its broader themes, which helps. The film has a lot to say, specifically about Black art and Black artists and the parasitic way white critics, white gatekeepers, and others will tear down their art. Or perhaps even worse, accept their art and celebrate it, but never truly accept the Black artist.

More than anything, Candyman becomes a story about alienation and how cyclical white violence and oppression take on multiple forms but continues nonetheless. In this, the film feels robbed of its 2020 release date because of the pandemic. This film would've hit much harder amidst last summer's national uprising on race in the wake of the murders of Breonna Taylor, George Floyd, and others. The film also feels blunted that despite its wide theatrical release this week, amidst a deadly wave of the Delta COVID variant, too many people will not be able to experience this movie the way it deserves to be experienced: in a crowded theater full of excited fans yelling at the screen in reaction to its thrills. With a crowded theater being potentially more deadly than saying "Candyman" five times in a mirror, it's a real shame.

But in this, it also misses its mark. The original, while certainly chock full of political commentary about redlining and how Cabrini Green was a manufactured disaster designed to oppress the people packed into its housing projects, never got overt or preachy about the messaging. This script feels the need in multiple places to really lay it on us as the audience and tell us exactly what it is trying to say. Perhaps we need such an overt message because the more subtle messages don't seem to come through. The film is going to rub all the wrong people (mostly white dude neckbeards) as "preachy," and they will complain about "Why are you putting social commentary into my Candyman movie" when, bitch, did you even watch the original? But as much as I love an overt kick in the balls towards white supremacy, the film deviates from "Show don't tell" territory into "Here is a scene where one of my characters explicitly tells you the message of the movie."

Those deficiencies aside, it's very possible DaCosta was intentionally putting them in as a feature, not a bug. Perhaps we should trust her instincts here as a director. Speaking of, the acting is also superb, and Yahya Abdul-Mateen II puts on another star-making performance post-Watchmen as Anthony, the young artist who becomes obsessed with the Candyman myth. But it's Teyonah Parris that actually does most of the heavy lifting in the film as his partner Brianna, who deals with his descent into this madness and provides a counterpoint to the narrative about art and artistry.

But it's clear that DaCosta is a visionary, even when parts of the film fall a little flat. Despite an all-killer-no-filler runtime of only 90 minutes, the film does bog down in some of its storytelling in the second act as it tries to tie everything back more specifically to the 1992 film. Again, it's well-executed and probably the only way to tell the story they wanted to tell, but it gets a little overwrought.

However, even in its most exposition-laden points, it's a delight to look at. It's clear why Marvel is trusting her with Captain Marvel 2,  much as this is the cinematic equivalent of Ryan Coogler's Fruitvale Station and Creed before helming Black Panther. Unfortunately, like Fruitvale Station, this is an excellent film that everyone who needs to see and understand it will never go. It's also exhilarating when you put together that DaCosta will rejoin with Teyonah Parris (Monica Rambeau in WandaVision) for that film; in the same way, Coogler rejoined Michael B. Jordan. Nuff said.

Candyman isn't a perfect film. Far from it. But it's beautiful, cinematic in a way most big studio franchise films aren't, and wears its heart on its sleeve. It's very fundamentally different from its source material, leaving behind the romanticism of its forbears, but its strengths outweigh its flaws. 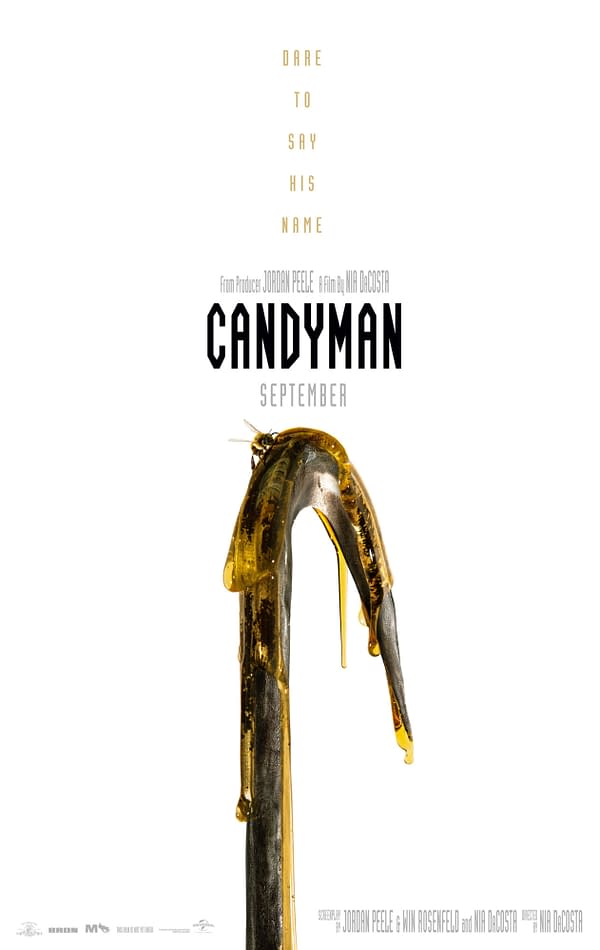 Review by Andy Wilson
8/10
This Candyman is more slasher and body horror than psychological romantic horror of the original, with as much social commentary as blood-- not that that's a bad thing. Impeccably filmed, director Nia DaCosta cements herself as a visionary while directing further star-cementing performances from Yahya Abdul-Mateen II and Teyonah Parris. Unfortunately, some of its choices blunt an otherwise great film, but it's worth your time and should amp up fan's interest in DaCosta's next outing in the MCU.