Jungle Cruise is Disney very much trying to do the Pirates of the Caribbean thing again, and when the movie manages to nail its tone, it works very well and is extremely entertaining. However, the moments when it doesn't work, it feels very redundant, like it has brought exactly nothing new to the table.

The first three Pirates of the Caribbean were lightning in a bottle that probably shouldn't have worked as well as it did. They did work, though, and they brought in massive returns at the box office. However, after the third one and the downfall of Johnny Depp, it makes sense that Disney would want to make that lightning strike twice with another movie based on another classic theme park attraction. Jungle Cruise isn't bringing anything new to the table when it comes to this adventure genre despite how much they want to say that they are reinventing it or bringing it to a new generation. It's trying to hit a very specific note, and when it hits that note, that is when the movie shines. All the main cast is here for it, and the script must be given some credit for making Dwayne Johnson's Frank into an asshole for most of the movie.

Unlike Elizabeth in Pirates or many other women in adventure movies, our female lead doesn't bother to go through the usual arc of straining against society. The movie makes a big deal out of the fact that she is wearing pants from the moment they set foot in the jungle with all the subtlety of a 2×4 to the face. "Our main character is wearing pants in a time when she wasn't supposed to wear pants," the movie screams into a bullhorn. "Therefore, she is empowered. Just look at the pants." Lily is a decent character all around, but she and her brother are the ones that fall into cliche more than anyone else. For Lily, it's the fact that she doesn't care what society thinks of her, so, therefore, she is a strong woman.

For MacGregor, it's a bit more insidious with its cliche. MacGregor is once again being billed as one of Disney's "out" characters [this is the fourth or fifth time this headline has been written for those of you keeping track]. Still, they decide to show that he is out by having him obsessed with his clothing and looks, constantly drawing attention to the fact that Lily is more competent than him. When they try to make it feel sincere, there is a moment that might have worked if the movie hadn't leaned so heavily into damaging cliches about queer men. This isn't a subtle movie, but the moment when MacGregor reveals that he isn't straight is subtle and would be well done if it didn't feel so out of place in the rest of the movie. You don't get to lean on the queer character for comedy because he cares about his clothes and then tries to have a sweet moment when he reveals why he would follow his sister wherever she goes. It doesn't work.

While it does seem like there is a fair amount of cynicism when it comes to this movie, and there is, it's also obvious that everyone involved does have a lot of love for the original attraction. The ride is absolutely nothing special, but the thing that makes it fun is having a good skipper who tells so many terrible puns and jokes that you just have to laugh. The opening scene with Frank shows him giving a jungle cruise tour while making all sorts of jokes and puns worthy of any skipper on the ride in Disney World or Disneyland. That sort of comedy will go over the heads of anyone not familiar with the ride, but for the Disney lovers in the crowd, they will love and appreciate that.

The action scenes are pretty fun though they can get a little chaotic with the various creature designs. There are times when it could be a little hard to tell who is where in the midst of a bunch of admittedly well-designed monsters, but that is sort of to be expected. Jesse Plemons's villain feels like he wandered onto set from another movie, but he also steals every single scene that he is in. He's just so ridiculous that you can't look away.

Jungle Cruise isn't going to change anyone's life in terms of its story or script, but it more or less finds the right balance between adventure and comedy. The puns seem to indicate at least a base knowledge, if not a love for the original attraction. The characters lean a bit too hard into cliche but are generally likable, and the over two-hour runtime breezes by, so it's well-paced. Does Disney have another franchise in the works? It's possible, and maybe the next installment could be a bit more original and lean into its weird mythology more. 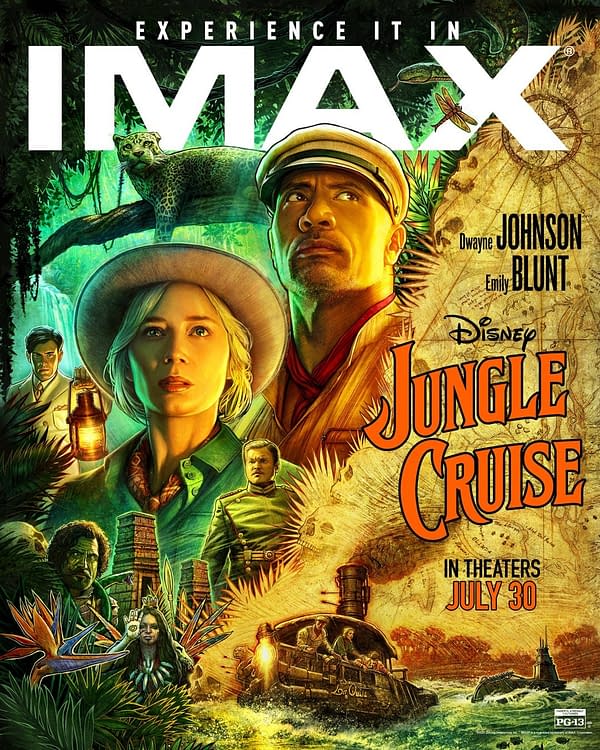 Review by Kaitlyn Booth
7/10
Jungle Cruise is Disney very much trying to do the Pirates of the Caribbean thing again, and when the movie manages to nail its tone, it works very well and is extremely entertaining. However, the moments when it doesn't work, it feels very redundant, like it has brought exactly nothing new to the table.

Eternals, West Side Story To Have 45-Day Release Windows

Eternals, West Side Story, The Kings Man, and Ron's Gone Wrong will all have 45-day theatrical windows. Encanto will have a 30-day window.

Shang-Chi: Morris and Trevor Slattery Get Their Own Character Posters

Scene stealer Shang-Chi and the Legend of The Ten Rings characters Trevor Slattery and Morris get their own character posters.

In this episode, Jason chats with Rose Williams, star of The Power, which is releasing from RLJE on VOD, Digital HD, and DVD on September 21, 2021. Say

Copshop star Frank Grillo weighed in on the final cut of the film from director Joe Carnahan and how his performance changed as a result.

In this episode, Jason chats with Chris Beyrooty and Connor Martin, directors and writers of Shelter in Place, newly out on digital.  The film tells the

Prisoners Of The Ghostland Score Now Available From Waxwork Records

Waxwork Records is releasing the score to Nicolas Cage's Prisoners Of The Ghostland and you can order it right now.

Get your thirst for 80's BMX excitement quenched when Rad comes back to theaters for one night only Oct. 14th thanks to Fathom Events.