Sword Art Online the Movie -Progressive- Aria of a Starless Night is a new theatrical anime movie from the unstoppable Sword Art Online series by author Reiki Kawahara. Adapted from another series of spinoff light novels from the original mothership series, this new movie goes back to the beginning of the series to tell new stories that happened in the early parts of the story that the original series didn't feature. It's a way to keep the series going by telling new stories set in the most popular early part of the saga.

Sword Art Online is set in a near-feature where MMORPGs have advanced to include Virtual Reality where players can wear VR headsets to experience their favourite games in VR and feel like they're meeting their friends and fellow players in a setting that feels real. When the new VRMMORPG game Sword Art Online launched, the players found themselves trapped in the new VR world with no way to log out. The only way for players to escape the game is to level up skills and armor and fight their way to the top of the world and defeat the final boss. Anyone who dies in-game will die in real life, their comatose bodies shutting down. The heroes of the story are a player named Kirito and his partner-turned-girlfriend Asuna. Kirito was an early player of the game during beta and used his knowledge of the system to level up faster and become more powerful in the game to survive. His journey is to go from an introverted, antisocial loner to a leader with a band of trusted friends, mostly through the influence of Asuna. She teaches him the value of love and companionship as he becomes a more rounded person.

Sword Art Online the Movie -Progressive- Aria of a Starless Night, adapted from the Sword Art Online – Progressive spinoff novels, goes back to the beginning to tell the story from Asuna's point of view. It reveals how Asuna ended up trapped in the game world in the first place and introduces a new character, Mito, her gamer friend from high school who got her into games in the first place. The movie visits Asuna's time in the game up to the point where she meets and teams up with Kirito. Mito is an original character created for this new movie.

If you're already a fan of Sword Art Online, then seeing it is a no-brainer. It does everything you ever wanted in the series, a chance to revisit the story's beginning from a different viewpoint. Sword Art Online the Movie -Progressive- Aria of a Starless Night is also a good entry point for newcomers to watch the story from the beginning, with Asuna as the main character this time. As the series progresses, Asuna has been the more interesting and complex character than the near-infallible Kirito. She's less of a power fantasy stand-in for male viewers and has more nuance in her relationships and reactions to the situations they end up in. The bigger budget also makes the world of Aincrad and the battles more fluid and epic. Everything feels bigger for a movie than a TV series. This is the first in a new theatrical movie series for Sword Art Online with new supporting characters and new story arcs set in the early continuity of the original series. It's not a cash-grab if there's still demand for it and original author Kawahara is writing the screenplay. It's a soft reboot that doesn't put a foot wrong. The franchise is nearly 20 years old now, and if it can continue without feeling old or tired and finds new ideas and things to say, all power to it.

Sword Art Online, which began as a humble light novel (aka Young Adult) series by Reiki Kawahara in Japan back in 2002, has quietly become a major Science Fiction and Fantasy franchise in just ten years. Still going strong, the series has spawned spinoff novels, manga series of both the main books and spinoffs and hugely popular anime series with original theatrical movie spinoffs. It's a multimedia franchise juggernaut with a worldwide fan following some original Big Science Fiction ideas that the Western Science Fiction and Fantasy community continue to ignore. It manages to be both a Science Fiction AND Fantasy series, having its cake and eating it too by having the Virtual Reality Gaming aspect of the story sit comfortably with the Medieval Fantasy RPG aspects of the game world to tell an epic fantasy saga – actually at least three fantasy sagas in different story arcs and game worlds! The series has managed to cover class systems in artificially-created fantasy worlds, what happens when game AI achieves sentience, the psychology of gamers, a Cold War arms race over developing Artificial Intelligence, and industrial espionage.  Looking at it from above, the scope of the series' ambition is greater than a lot of the major Science Fiction and Fantasy sagas published in the West. Its ideas haven't even been borrowed or ripped off by any Western authors so far because they've been unaware of this series that has been around for nearly 20 years now. Netflix is developing a live-action series due to its global popularity that has shown up on its algorithms. Yet, the series is still ignored by the Science Fiction and Fantasy community.

Sword Art Online the Movie -Progressive- Aria of a Starless Night is now playing in US cinemas, including on IMAX. 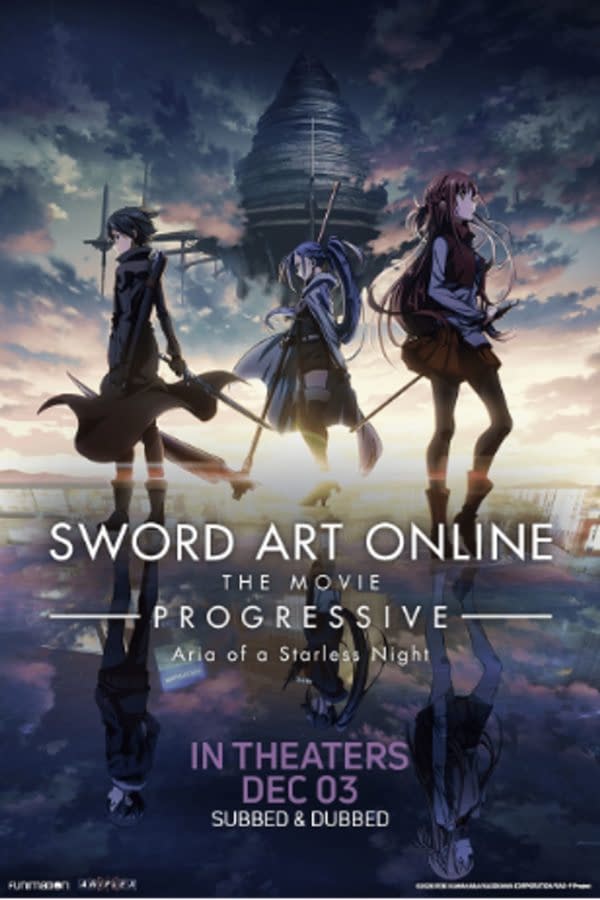 Review by Adi Tantimedh
6.5/10
A prequel movie that's also a soft reboot to tell the original story from the heroine's point of view, this does everything it should do to please fans and also provide an entry point to anyone new to the story.

Gary Oldman confirmed he is now filming Season 3 of Apple TV+'s Slow Horses and will begin filming the fourth season in 2023.

At CCXP 2022 in Brazil, Crunchyroll announced eight new anime series coming in 2023, including The Fire Hunter, My Home Hero, and more.

Manta Comics, one of the leading digital comics platforms, today revealed three new original series created by its in-house studio that will make up its