When it comes to Star Wars, there is an aspect of that title that it hadn't really explored until Rogue One came out in 2016, and that was the idea that war leaves everyone bloody. The Alliance of Rogue One was willing to kill people that got in their way, and two of our heroes in that story were people who had killed others in cold blood, one of which we witness in the first scene we meet him. War leaves everyone bloody; no matter how hard you might try to remain solely the "good guy" in a conflict, you're going to get your hands dirty if you want to win. It's something that people don't like about Rogue One because there can be some dissonance between the Alliance of that movie and the Alliance of A New Hope. If you're going into Andor, expecting to see more of the Star Wars that we see explored in other Star Wars material, you're going to be let down. No one here has clean hands, which is clear from the first scene of the first episode of Andor. The three-episode premiere of the latest Disney+ spinoff show feels so different from anything we have seen in the Star Wars universe because it accepts a reality where even a conflict as black and white as the Empire versus the Alliance still holds shades of grey.

The first three episodes of Andor also present a very clear throughline as it tells a mini-arc and introduces nearly all of the supporting cast of characters. We get an idea of the stakes, and we see the kind of man Cassian is five years before he gives his life for the Death Star plans. While it was likely a mistake to not de-age star Diego Luna even a little, it's not that distracting. We see the kind of life he is living in one of the most lived in cities that we have seen in the Star Wars universe in a long time. The planet of Ferrix is masterfully built, and there are so many little things; from how it wakes up in the morning to how the citizens let their own know that danger is afoot, it feels like a real place we could explore.

If you're someone who has previously thought that some Star Wars shows seemed to linger on the Easter Eggs too much, then you're going to enjoy Andor. This isn't a show setting out to be fan service for anyone other than the megafans of Rogue One who wanted to see more of this corner of the galaxy. It's grounded in a way that feels very similar to the first season of The Mandalorian before it got all caught up in Jedi bullshit. In Andor, the mystique of someone like Obi-Wan feels like it doesn't even exist in the same universe. This is a world and a city of people just trying to get by as the world around them begins to fall into ruin. The way that people deal with that is interesting and Andor, at least at the beginning, seems to be exploring the other idea about war; it's petty. Sometimes, all you can do to fight back is something a little petty, and that spite with only a sense of protecting his interests are Cassian's primary motives when we first meet him. That journey of finding the will to take on this fight in a much bigger capacity, one that really matters but also comes with bigger risks, is the journey we're going to go on through these two seasons.

If there was something that The Book of Boba Fett really struggled with at the beginning of the season, it was the pacing of its flashbacks to its present-day storylines. It always felt like one was just going on long enough that it was starting to get going, and then it would switch back to the past or the present. It messed with the pacing of the episodes and made those first few feel extremely sluggish because every time it felt like the flashbacks were finally getting somewhere, we were back in the present, and vice versa. We do have flashbacks in these first three episodes of Cassian's childhood, but Andor knows how to pace out its flashbacks. They are brief and don't interrupt the overall flow of the episode we are watching.

These first three episodes are hit or miss when it comes to standing on their own as individual episodes of television. However, it seems they were always intended to be released as a batch, so if they were built that way from the ground up, it's a little more excusable. The fourth episode feels like the beginning of the next arc of the show. If this show is going to be a series of mini-arcs spread over two or three episodes, then that is interesting, but we'll have to see if Andor has the same pacing problem as so many of the other Disney+ series. A twelve-hour movie that is released weekly, as most of these shows tend to feel like, means that the middle is going to drag, and each week doesn't have a beginning, middle, and end to satisfy the audience. We spoke about this in our She-Hulk reviews; when you are releasing weekly, you need to give your audience a sense of satisfaction that can hold them over to the next week. The fourth episode felt like it was going in the right direction, but it's hard to tell based on what we have seen so far.

These first three episodes also do a great job of introducing us to the primary cast and all of their motivations, sort of. It's clear that everyone has their own agenda, even the people who seem like they don't, and it's interesting to watch them play out. Syril Karn, played by Kyle Soller, is a fascinating villain in the first three episodes because he's a massive tool who isn't entirely wrong. His arc post-episode three looks like it's going to pan out in exciting ways. Bix Caleen, played by Adria Arjona, is a lot of fun to watch, and the dynamic she has with Cassian, even more so after the events of episode three, is going to be fun to watch play out. Maarva, played by Fiona Shaw, has some real potential, and the show could grapple with a very real problem that has been plaguing the world for generations with her character. That is not an issue this writer could tackle, but hopefully, someone will look into it as the show begins to unfold and we learn more about Cassian's backstory.

We could watch Stellan Skarsgard in literally anything, but Luthen Rael and his impending arc with Mon Mothma (Genevieve O'Reilly) is going to give people the cloak and dagger Senate story that they have been aching for. While Cassian and the other characters are down in the dirt, being petty and getting bloody, Luthen and Mon are trying to survive in a place where anyone could stab them in the back at any given time. It's the contrast between the crisp and clean scenes of the Empire and down and dirty scenes of what is going to become the Alliance and the Rebellion. A man like Luthen, who walks in both, is fascinating to watch. Skarsgard is essentially pulling double duty as Luthen has to wear a mask just to survive, so he's playing a character who is putting on an act. It's fun, and their story, combined with the little we have seen from Supervisor Dedra Meero (Denise Gough), proves that things behind enemy lines will be fun to watch unfold.

Overall, as someone who has been claiming that Rogue One is the best Star Wars movie [don't @ me], Andor delivered on everything that a fan of that particular Star Wars movie could have wanted. However, as for other Star Wars fans, this feels fresh and new in an exciting way that we haven't felt from a Star Wars property in a long time, which is ironic considering it is a prequel series. The first three episodes of Andor are an excellent opener to the series that lays the cards on the table, so you know what you're in for, and episode four promises even more to come. 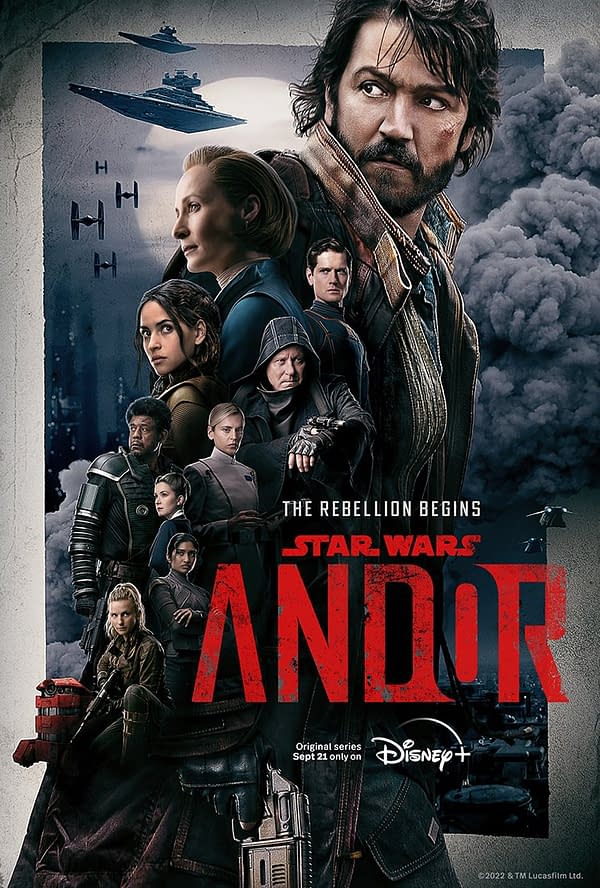 Review by Kaitlyn Booth
9.5/10
The first three episodes of Disney+ & Lucasfilm's Star Wars: Andor are an excellent opener to the series that lays the cards on the table, so you know what you're in for, and episode four promises more excellence on the way.

Armor Wars Switches From A TV Show To A Feature Film

Armor Wars, which was originally pitched as a six-episode TV series for Disney+, is reportedly being retooled as a feature film.

Deadpool 3: Hugh Jackman Will Return As Wolverine & A Release Date

Hugh Jackman is returning as Wolverine in Deadpool 3 officially, so we can all stop writing a billion speculation articles about it.

In case your feels weren't already taking a beating, AMC's The Walking Dead released the supercut compilation video, "The Journey... So Far."

Community creator Dan Harmon honored a fan's special commitment & shared how Gillian Anderson had him briefly wishing that he had Twitter.

Just when The Chadster thought the wrestling wars could be over, Tony Khan has booked a fan-pleasing lineup for AEW Rampage tonight.

Billy Eichner is pulling out the big guns for this episode of Billy on the Street, teaming with Elena to get the word out about Bros.