FOX's Bob's Burgers takes on the disappointments that can sneak up on you in life as Gene (Eugene Mirman) and Bob (H. Jon Benjamin) experience a new VR arcade next to the restaurant. Warning, some spoilers may be waiting ahead for you, so make sure to watch the episode first and then come back if you don't want anything revealed to you. Otherwise, see you on the other side of this image break…

Bob's Burgers brought the reality of virtual reality stores popping up in random storefronts and malls. Not every virtual reality experience will be that amazing or make your older relative think they're walking a tightrope from one building to another. I loved the way this episode had a hilarious yet blunt take on this trend. While some virtual reality opportunities may be filled with realistic situations, graphics, and style, that's not the case for them all, and it was both heartbreaking yet funny seeing Gene and Bob realize this.

Bob's Burgers did a decent job for this episode as it focused on Bob and Gene bonding, even if it was a less-than-fun situation for them. Bob realizing he can't protect Gene from every disappointment was a fantastic scene to watch. The series continues to remind me how much the parenting depicted by either Bob or Linda (John Roberts) is so healthy and loving. The way Bob spoke to Linda at night and communicated how he was nervous about Gene getting his feelings hurt by the subpar VR arcade was spectacular. There was some well-written dialogue between these characters in this episode.

Bob's Burgers had an overall fun episode, but the parts where it returned to the restaurant were not as interesting as I'd hoped. These scenes also didn't necessarily work that well with the VR storyline. It was adorable seeing how invested everyone got in stacking the restaurant menus, but that couldn't necessarily save that portion of the episode. It only detracts a slight amount of quality from this episode for me. There was a lot to love with the virtual reality bonding experience for Bob and Gene. This season has had some great hits, and some rough misses so here's hoping the Thanksgiving episode is a memorable one. 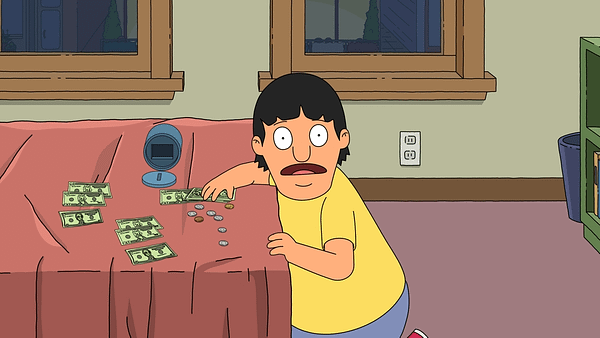 Review by Brittney Bender
7.5/10
FOX's Bob's Burgers, S13E07, "Ready Player Gene," was a fantastic story of bonding between Bob and Gene as well as another great example of fantastic parenting on-screen. While the episode lacked enough interesting aspects in its side story, the main story between Gene and Bob made up for the gaps surrounding it.
Credits
Network
FOX