The sixth episode of Demon Slayer: Kimetsu No Yaiba Mugen Train Arc, "Akaza", was such a wonderful shonen treat. Turns out the Mugen Train was not the only danger our Demon Slayers were in for. So Inosuke and Tanjiro have defeated Enmu, which causes the train to get off-track. Having been stabbed, Tanjiro is unable to save anyone aboard and asks Inosuke to help save everyone. Kyojuro then appears and tells him that even though there are hoards of injured people, no one was killed. He helps Tanjiro master his breathing and concentration to stop the bleeding from the stab.

They might have defeated Enmu, but the danger is far from over: an upper demon appears, Akaza, and is ready to fight against Kyojuro. Noting the change of tone and the power of the new enemy, he gives clear instructions to Tanjiro and Inosuke to stay out of it. And this is where the real fight begins. I think, just like the fight against Rui in the first season: this fight is so stunningly animated. Once again, I can never get over the use of elements to illustrate the powers. This fight also gives us a clear understanding of how fast and how powerful Kyojuro really is.

Call me a hippie, but one of the things I like most about Demon Slayer is how it tends to put most demons on a gray light— meaning, there is something about them that is or was good and remained that way, hidden under Muzan's instilled evilness. Except for Enmu though, there was absolutely no shred of redemption for that mofo. However, despite his reasons, Akaza seemed to not really want to fight Kyojuro to death, nearly begging him to become a demon so they could fight for eternity and hone their skills. And of course, Kyojuro being the wholesome boi gave Aang a run for his money with his beautiful words about life and the wonders of it, death being one of them.

It is this one fight that made Kyojuro my favorite character when reading the manga, so pure and beautiful character all in all. I honestly thought the sixth episode would be the last one, but yay: I am so glad I was wrong and get to enjoy Kyojuro's lessons for one last episode. Once again, I stand by my words that it was a great decision to animate as a serial instead of film. However, I think Mugen Train is still one of the best anime movies out there; it is just that I do not think anime movies are taken as seriously or in canon, as they should. That said, I really cannot wait for the next arc as it has one of my favorite moments in the manga. 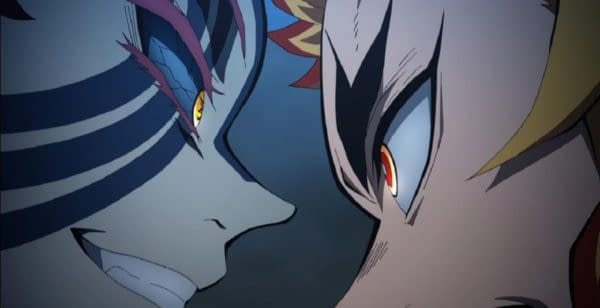 Review by Alejandra Bodden
9.5/10
The sixth episode of Demon Slayer: Kimetsu No Yaiba Mugen Train Arc "Akaza" was such a wonderful shonen treat. It turns out the Mugen Train was not the only danger awaiting our Demon Slayers.

Demon Slayer: Kimetsu No Yaiba Entertainment District Arc Episode 7 "Transformation" was an impressive treat for both the heart and the head.