Greetings, comrades! It is I, your El Presidente, and if you thought that MTV's Double Shot at Love would end in any way other than with Vinny choosing the girl most liked by his mother, you haven't been paying attention to the Jersey Shore's resident mama's boy for the last decade. Haw haw haw haw!

Double Shot at Love Season 3 Episode 12 "Vinny's Final Shot" was the season finale, and maybe series finale unless the show wants to take on the liability of finding Ronnie a girlfriend next year. Three contenders for Vinny's love made it to the final episode: Erika, Peachy, and Akielia. After a discussion with Pauly, Vinny decided the best way to see which girl he should be with forever was to spend some time with them like normal people on double dates with Pauly and Nikki.

I have to disagree, comrades. The best way to choose a potential mate is to lock the candidates in a room with a single knife and see who makes it out alive, but unfortunately, MTV rejected my pitch for the reality show El Presidente's Pleasure Palace, so Vinny had to do things his way. That meant a dinner date with Akielia, Bocce ball with Erika, and dictionary with Peachy. At the end of each date, Vinny scored a kiss. From Peachy, it was a playful kiss, though Vinny liked it best and had the most fun with her. Erika gave Vinny a long kiss with tongue and spent the evening draped all over him, with Nikki commenting that they felt like the most natural couple. Akielia was, as usually, standoffish and initially gave Vinny the cheek before reconsidering and giving him a peck.

So naturally, Vinny dumped Erika immediately the next day, and she was quite upset by it. Vinny then arranged new dates with the remaining contestants. For Peachy, Vinny wanted to see if her positivity was an act, so he spent the date connecting with her emotionally as she opened up about her past struggles with an eating disorder. For Akielia, Vinny still couldn't tell if she actually liked him, so he made out with her in a hot tub all night.

In the end, the outcome was never in doubt. Vinny dumped Peachy (who didn't really care) and chose Akielia, who nearly rejected his offer of a shot at love until he revised it to a "tiny shot at love," at which point she begrudgingly accepted. Why choose the one girl who doesn't seem to actually have any interest in him? The question is the answer, comrades. Haw haw haw! And besides that, she was the one who Paula liked the most.

But did Vinny make the right choice? That depends on your perspective. Neither Vinny nor Akielia have commented on their current relationship status, which is not a good sign. It's not clear if they're still together, but if I had to guess, I would say probably not. But to call it a poor choice would assume Vinny ever had any intention of settling down with anyone from the show, or, for that matter, with anyone at all. If I had to bet money on it, comrades, I would bet that the commitment-phobic Keto Guido got exactly what he wanted.

Until next time, comrades, with next time being next week's 12 Days of Jerzmas holiday special: socialism or death! 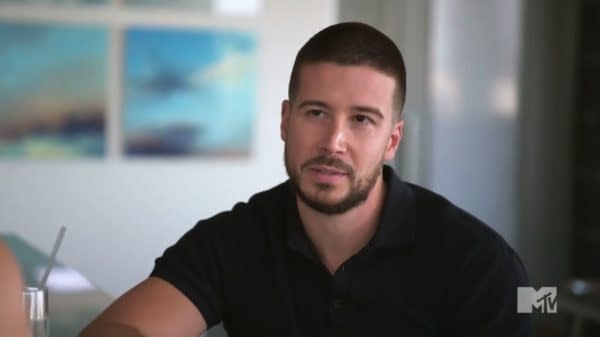 Review by El Presidente
7/10
The season finale of MTV's Double Shot at Love ended with a decision that frustrated many viewers, comrades, but was probably a forgone commitment for a man-child afraid of commitment.

WWE has hired Catherine Newman as Executive Vice President and Head of Marketing following rumors that Stephanie McMahon is being pushed out by her own father.

CM Punk sparked confusion on Friday when he delivered a promo leaving fans wondering whether or not he relinquished the AEW Championship.

Will MJF No-Show AEW Double or Nothing Tonight?

A lot of marks believe the heat between MJF and AEW before Double or Nothing is too serious to be a work. And that's what would make it the perfect work.

Adding to the already troubled start of MTV's Jersey Shore 2.0, the original Jersey Shore cast has come out publicly against the reboot.

Report: Khan to Take Over WWE in Stephanie McMahon's Absence

Stephanie McMahon is taking a leave of absence from WWE, and the power vacuum will apparently be filled by... Khan?! But which Khan?!

What We Do in the Shadows S04: Anoop Desai Cast in Recurring Role

With What We Do in the Shadows returning for Season 4 on July 12, American Idol finalist Anoop Desai is set for a major recurring role.

With the third season's fourth episode hitting on Sunday, here's a look at the preview images for Paramount+'s Evil "The Demon of the Road."

With production underway on the second season, we learned this afternoon that CSI star Wallace Langham joined the cast of HBO's Perry Mason.

The Boys star Jensen Ackles makes a "threat" that probably sounds like a promise to millions; Karl Urban & Stephen Colbert in a supes duel?!

With the series returning to Hulu for Season 2 on July 21st, here's a look at the newest teaser for American Horror Stories, "Die-O-Rama."