I love a good animated adult comedy, but the recent episode of FOX's HouseBrokenhas left me disappointed and craving a better plot. The seventh episode of this show's first season, "Who's Going to the Vet?", involves Chief getting into his owner's belongings, specifically her personal massager. What proceeds to happen is his journey to the vet and eventual attempt to create his own group after talking to other patients.

Besides the episode's main story, Shel deals with the break away from his shoe love affair in an attempt to get back together with another turtle, Darla. And Tabitha accepts the help and housing offered from The Grey One. While portions of the episode remained funny and produced some laughter, the entirety of it felt like it was missing both the mark and my attention span. I enjoyed the previous episode, but this one bored me.

HouseBroken has not had an easy start in the arena of adult animation. Currently, competition is high with the current run of the new season of Rick and Morty being a big component. But it also has to grab any view it can during a rough time slot of the summer season. Previous episodes that I've enjoyed from Housebroken have promised an evolving story that could present a cruder and raunchier side of the pet life narrative. In this episode, it felt as though it was more of a filler than a main piece. What I mean is that this episode felt like it could have been left out of the season and not much, except maybe Tabitha's storyline, would be impacted. But it's not just the lack of story progression that hurts it, it also lacks exciting moments it could have had with Chief at the vet. The conversations and jokes were funny when he had conversations with other pets, but otherwise, it felt bland. I was hopeful after last week, but now I'm more concerned than thrilled for the future of HouseBroken. 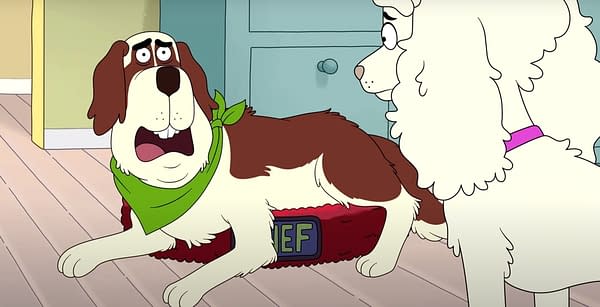 Review by Brittney Bender
6/10
What was a hopeful beginning for the series, now remains downcast as the recent episode lacked the fun and appeal it had in previous outings.
Credits
Network
FOX

The Walking Dead: AMC Releases Season 11 E05 "Out of the Ashes" Promo

Negan & Maggie keep on truckin', Alexandria defends itself, and Commonwealth orientation begins in the following promo for The Walking Dead.

With filming having wrapped last month, Seth MacFarlane shared a video announcing that scoring for The Orville Season 3 was underway.

Roman Reigns vs. Brock Lesnar Will Happen in Saudi Arabia

Roman Reigns will defend the WWE Universal Championship against Brock Lesnar in Saudi Arabia at Crown Jewel in October.

A League of Their Own Releases Character Details; 5 More Join Cast

Amazon, Sony TV, Abbi Jacobson & Will Graham's A League of Their Own series take welcomed 5 more to the cast and released character details.

Returning for Season 3 on October 13, The CW released the key art poster for Batwoman showing Javicia Leslie's Ryan Wilder "Out for Justice."