I had the opportunity to attend the first virtual event of Morbid Cinema Macabre by Moment House & Morbid: A True Crime Podcast, hosted by the ladies themselves Alaina Urquhart and Ash Kelley. The virtual experience took place on January 15th, starting at 8PM EST. As someone who lived in Massachusetts previously, I was quite excited to see the Queset House since I hadn't been in there before. The spooky setting combined with a fairly easy & accessible site for the event made the experience begin smoothly.

The chat feature on the Moment House website was nice, offering a unique profile setup for anyone joining (picture, name, bio, etc) and the ability to join a "house" or create one to have fun conversational groups. The countdown was followed by an easy transition to a camera on Ash & Alaina as they prepared the audience with introductions and a brief overview of what was to come. With Ash dressed as Regan from The Exorcist and Alaina dressed as a demon (complete with gorgeous red wings, which I need to know the origin of so I can grab some) in honor of The Omen, the storytelling of cursed movie sets was going to be a portion of the event. Morbid Cinema Macabre had fantastic lighting and for a live virtual event the switch between cameras was incredibly smooth and well done. Before any talks about cinema arrived, Alaina told everyone about a unique legend from Connecticut about the curse of Micah Rood that involved a suspiciously thriving apple tree and a farm's legacy.

While the Morbid Cinema Macabre event included some spooky moments like the lights near the fireplace suddenly went out that would freak anyone out, some hilarious moments such as Alaina's face changing when she knew she was about to shock Ash with some information was great. We got to hear about the process of the costume making for Ash  as well as some fun personal ghost stories. A Q&A segment of the event brought out those stories, why Alaina chose the Queset House, a fun appearance from Ash's fiancé Drew, what cases have affected them the most, and what made them want to start the podcast. They shared some great moments and insights into the cursed films, including a serial killer who appeared in a hospital scene in The Exorcist, who was possibly responsible for the Bag Murders in NYC in the late '70s. Sitting & watching Morbid Cinema Macabre felt like sitting with friends to discuss weird lore and to tell stories that could freak out the others. An important point was made about the desire for Morbid: A True Crime Podcast to be a medium that tells victim-centered stories when speaking on true crime. It's a big part of what had made this podcast a favorite among many fans. For being in an unfamiliar environment & having to bring a certain level of entertainment with a visual experience like this one, Morbid Cinema Macabre was a great start to a series that is sure to continue the success of this podcast based on what I witnessed. 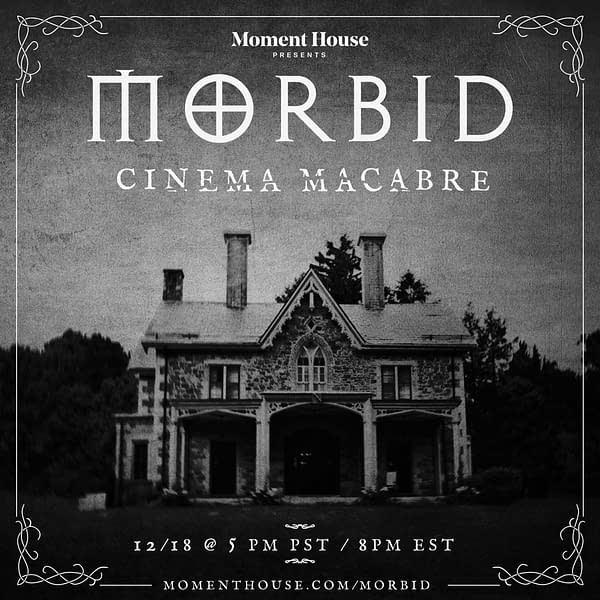 Review by Brittney Bender
9/10
Morbid Cinema Macabre was an event that brought a unique warmth and quality of entertainment to audiences. Like any beginning of a new style of event, it wasn't perfect but it displayed how much podcasts can do in the virtual media sphere during these times.
Credits
Podcast
Morbid: A True Crime Podcast
Producer
Moment House