Our favorite trio of witches confesses to struggling a bit on their new academic tracks on this episode of Freeform's Motherland: Fort Salem, "A Tiffany". Raelle (Taylor Hickson) is struggling with her new-found fungal power, Abigail (Ashley Nicole Williams) is struggling to find her worth as a witch without being tied down by tradition, and Tally (Jessica Sutton) is struggling with General Alder's (Lyne Renee) blocked memories and making sense out of them. Although, thankfully, the tension that seemed to creep up when Abigail found out that power was Raelle's only, seems to have dissipated and their relationship continues to go well. I am a fan of the little moments between them when they are not fighting like they were all the time on the first season of Motherland.

First, though? I need to get this out of the way. The current Scylla (Amalia Holm) and Anacostia (Demetria McKinney) storyline is killing my nerves. My heart starts going crazy whenever they get into socializing with the enemy that I have to watch between my fingers. I know, I am a total chicken when it comes to suspense like that. So it is doing its job, it might just be my nerves that cannot quite take this tension. However, they are doing a great job partnering up despite their constant bickering. I do love how badass Anacostia always seems to be.

Talking about higher-ups, it seems General Alder got her way with Madam President Wade (Sheryl Lee Ralph). However, I do not see this going well at all. I am expecting VP Silver (Victor Webster) to go off at any time. Honestly? I really thought he killed the President when he showed up to witness Alder's new war-pet training with Raelle. Talk about another situation I do not see going well for some reason- I mean, with Raelle being the wild card that she is, who knows if she turns evil at some point.

So the Imperatrix has come to college to remind the witches of part of their duties: to bear a child and carry their pure lineage. I was surprised to see that the one who took most issue with these traditions was Abigail, who now has a deadline for her handfasting with Gregorio (Praneet Akilla). Turns out she confesses to the girls she now has bigger hopes for herself and goes on to show that she can also be a Bellweather to make it to the history books. She totally ditches the event and goes on to manipulate tornadoes and then kinda passes out in Adil's (Tony Giroux) arms. However, during the little social event the Imperatrix put together, Tally was taken over by another round of memories that incriminated General Alder as having participated in crimes of war. It seems she will start doubting the general pretty soon, although I have a feeling it will come to bite her in the but and make Alder look bad on purpose.

I hope we can see a fuller picture of Alder's past. While I do not trust her, it seems they want to make her look bad to possibly have a bigger comeuppance later on. I hope she ends up being a good one and just having to take on a bad rep like Itachi had to in Naruto. Anyhow… this season of Freeform's Motherland: Fort Salem is moving pretty fast and I am very much looking forward to next week's episode as it seems things will be going to shit very soon. 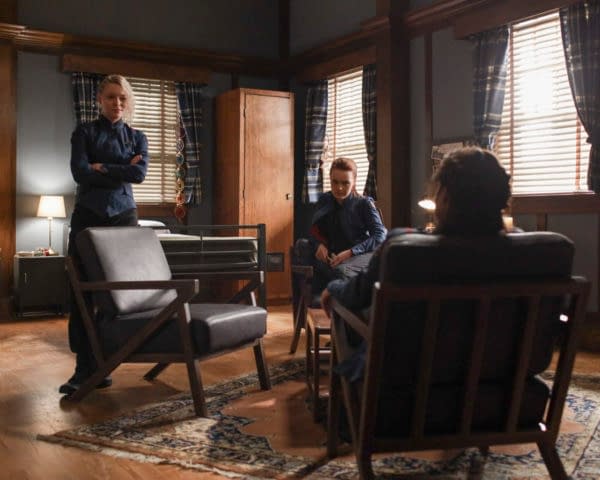 Review by Alejandra Bodden
8/10
Our favorite trio of witches finds themselves struggling with some serious change in an effective episode of Freeform's Motherland: Fort Salem "A Tiffany". Raelle (Taylor Hickson) is struggling with her new-found powers, while Abigail (Ashley Nicole Williams) is struggling to find her worth as a witch without being tied down by tradition, and Tally (Jessica Sutton) is struggling with General Alder's (Lyne Renee) blocked memories and making sense of it all.
Credits
Network/Streaming Service
Freeform

My Hero Academia S06E08 "League of Villains vs. U.A. Students" was a show of power that brought out every emotion across the spectrum.

Crunchyroll's Chainsaw Man S01E06 "Kill Denji" was a horrifically terrific chapter from its first moments to its final seconds.

This week's Spy x Family episode was another sweet & fun two-for-one deal: "A Revenge Plot Against Desmond" and "Mama Becomes the Wind."

Interview with the Vampire Season 1 Wraps in Bloody Brilliant Style

The finale of Interview with the Vampire impressively wrapped up an already remarkable first season, hitting the right notes along the way.

My Hero Academia Season 6 Ep. 7 Review: Dark Days Ahead for Our Heroes