Things get awkward during dinner on this week's episode of My Hero Academia, "The Hellish Todoroki Family". After being asked to bring Shoto and his friends home for dinner, it is impossible for the Todoroki family to keep their secrets hidden and tension from rising. Turns out that Endeavor is able to hold it down in the streets, but his life at home is still as tumultuous as ever. It seems Endeavor is as gunshy to forgive himself as his family is to forgive him. Will Endeavor ever get the chance to prove himself as a father at home? Or will being the number one hero be enough?

We are back with our main trio: Deku, Shoto, and Bakugo still working under Endeavor and still straining to stay on his heels… And still not being able to catch up to him or capture a villain before Endeavor can. However, they are still willing to take over the challenge and working hard to prove that they can before the summer is over. Though it seems that Endeavor has a special power to sense when danger is about to happen. He continues to give the boys advice and repeating to them they must be able to exercise all the principles subconsciously to the point where they could do it in their sleep. I get the impression that they will soon be catching up and surpassing their master.

Though we get to see what Endeavor struggles with the most: being the number one hero and finding a way to shining on his own as All Might advised on a flashback we got to see. It was a very nice exchange between the two heroes where All Might encourages Endeavor to be his own self and find a way of shining as the number one hero without feeling the need to be like All Might. However, Endeavor still struggles in believing he could be it with the way things are at home. Fuyumi finds out Shoto and his friends are working with him and asks him to bring them over to the Todoroki home for dinner.

Things go as expected as Natsu still refuses to forgive his father, making it pretty awkward for Deku and Bakugo who are not quite able to keep his mouth shut. Deku on the other hand makes Shoto realize he is indeed giving Endeavor a second chance because he is a kind person and hoping to forgive his dad. I love the relationship between Deku and Shoto and how much the former has changed the latter. Shoto's story arc and development along the seasons have been one of my favorites. He has become such a genuine good boi. We also get to see that both Natsu and Endeavor got to overhear what Deku said, so I am curious how things will go as My Hero Academia rolls on. 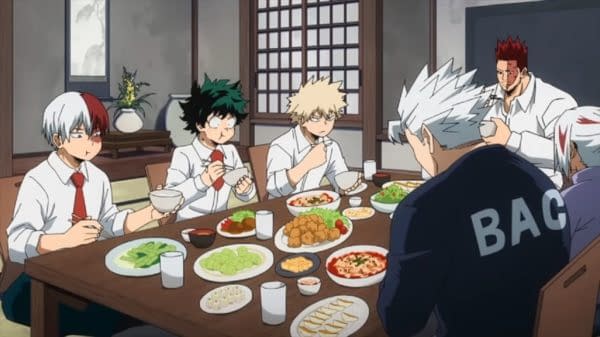 Review by Alejandra Bodden
8.5/10
Things get awkward during dinner on this week's episode of My Hero Academia, "The Hellish Todoroki Family". After being asked to bring Shoto and his friends home for dinner, it is impossible for the Todoroki family to keep their secrets hidden and tension from rising. Will Endeavor ever get the chance to prove himself as a father at home? Or will being the number one hero be enough?

My Hero Academia Season 5 ended with a "BANG!" with "The High, Deep Blue Sky", offering us a sense of how bad things are going to get.

What We Do in the Shadows S03E05 Review: Guillermo the Manipulator!

This week's episode of FX's What We Do in the Shadows "The Chamber of Judgement" was another success for the impressive third season.

The Last of Us: HBO Releases Image of Pascal's Joel & Ramsey's Ellie

On Sunday night, HBO released a first-look image of Pedro Pascal as Joel & Bella Ramsey as Ellie from the live-action The Last of Us series.

But Can "Armageddon" Beat This Batwoman / The Flash Crossover?

The Flash star Candice Patton and Batwoman star Javicia Leslie may have already set a crossover bar too high for "Armageddon" to clear.