NXT Champion Bron Breakker will again defend his title against Joe Gacy a week from Saturday at NXT In Your House.  But before that, he had to face a disgruntled Duke Hudson looking to make a statement on this week's NXT 2.0.  Did Breakker make it through Hudson to focus on Gacy, or did the situation get more complicated than the Champ imagined?  Let's take a look.

We open this week's NXT 2.0 with Tony D'Angelo cutting a backstage promo against Legado del Fantasma and hyping up Stacks and Two Dimes for their match next.

This was a pretty green match all around here.  They had decent timing and storytelling, but the actual in-ring work had a lot of slip-ups and they didn't look very comfortable.  It all ends when Stacks & Two Dimes hit a double running boot to the head of Blade for the pinfall.

After the match, Legado comes out and it all winds up as a six-man brawl in the ring.

Lee gets some offense in at different moments here, but overall, he gets tossed around hard by Sanga, who eventually ends it with a Chokeslam for the pinfall.

After the match, Xyon Quinn enters the ring and taunts Lee, but Sanga returns to help Lee.

Next, we see a video from early in the day where Joe Gacy was trying to intimidate Bron Breakker.

So the whole package for Fyre looks more complete this week.  Last week, she didn't appear all that different from her former self as Kay Lee Ray, but now, she has a more impressive entrance with a flaming baseball bat and lighting/smoke effects, plus her hair looks different now and helps to separate her from her former image a bit.

The match is short but solid enough.  It feels like they weren't going at full speed here though.  Fyre ends it with a Swanton Bomb for the pinfall.

After the match, Lopez has words with Cora Jade at ringside.

Next, we get the members of Diamond Mine being informed that Roderick Strong hurt his ankle and has canceled his match tonight, much to the dismay of the team.

We then go to a backstage interview with Fallon Henley, Josh Briggs, and Brooks Jensen (who is listed in the bug on the screen as "Jensen Brooks", so I had to go make sure they didn't inexplicably swap his names, but it looks like it's just an error) where we're informed that Nikkita Lyons has been injured and as such, has been removed from the NXT Women's Breakout Tournament and Henley has a pass to the finals.  But hold on, as Tiffany Stratton comes up and talks some trash to her, leading to Stratton taking Lyons' place against Henley tonight.

Probably the best match we've seen from Legend thus far with no botches, loudly called spots, or injuries.  Perez takes this one when Legend tries to Powerbomb her, but she reverses into a Pop Rox for the pinfall.

Next, we have Toxic Attraction cutting a backstage promo making fun of Indi Hartwell, when they're jumped by Katana Chance and Kayden Carter.

So right off the bat, I've got an issue here.  We just saw Rose get jumped by two people like a minute ago, yet she enters here acting like nothing happened and no-sells the whole thing.  Bad storytelling.

They have a solid match here, but it ends with unnecessary nonsense.  The backstage brawl spills out to the ring and the distraction allows Rose hit Hartwell with a running boot for the pinfall.

After the match, Rose tries to exit but Wendy Choo hits her with a sack full of sports balls on the stage and poses with the belt while dancing like an idiot.  So Hartwell has a good match and gives her all, only to be buried under stupid shenanigans and a dancing prop comic clown in a onesie.  Awful.

We then get a promo from Pretty Deadly mocking their challengers for the Tag Titles at NXT In Your House, The Creed Brothers.

It needs to be noted how much better Stratton looks in the ring every week.  She was an instantly solid character performer, but she's matching it with in-ring talent now.  WWE looks to have a potential star here.  The match is a good effort by both, with some nice limb-targeting throughout.  Stratton takes it with a corner Corkscrew Splash for the pinfall.

We then get a backstage interview with Carter and Chance, who explain their attack on Toxic Attraction.  Choo joins them and they challenge Toxic Attraction to a six-woman tag match where all of the titles will be on the line.

We now get a video package for Thea Hail, who is graduating from high school tomorrow and has been accepted to some of the best schools in the country but will be training at the Performance Center, which I guess makes her really stupid?  Seriously, can someone please sit this kid down and make her watch Beyond The Mat or Dark Side of the Ring and let her know what she's doing with her life?  Anyway, she will be debuting on NXT 2.0 next week, so I guess they're just throwing untrained kids in the ring now and seeing what happens.  Cool.

So this is a pretty quick and one-sided one here, with Wagner taking down Jiro.

After, Wagner goes to toss Jiro into the crowd again, but Josh Briggs runs in to make the save and run off Wagner.

We next go to the parking lot to find Tony D and his guys and he says he wants another meeting with Santos Escobar next week.

We then find Wagner backstage with Robert Stone and Sofia Cromwell as they discuss Wagner's ever-growing list of enemies in NXT 2.0.

Next, Toxic Attraction answers the challenge from earlier and sets the match for NXT In Your House.

We then go to the barbershop with Carmelo Hayes and Trick Williams, when they're met there by North American Champion Cameron Grimes, who informs Hayes that ahead of their title match at NXT In Your House, he'll be facing Nathan Frazer next week on NXT 2.0 as a warm-up.

We then get a hype package for someone named Giovanni Vinci, who appears to be a rich guy from Italy, even though we don't get to see him in the video.

A pretty good heavyweight main event here.  These guys both know what they're doing and I'm happy to see Hudson given some spotlight, as I think he's been very underutilized.  So we get kind of a wonky finish here when a chair winds up in the ring and Gacy and his hooded goons try to interfere, leading to Breakker hitting Hudson with the chair and being disqualified.

Gacy taunts Breakker after the match, taking in joy in his DQ as the rule is in their upcoming title match, if Breakker is disqualified, Gacy wins the title.

And that's that for this week's NXT 2.0, which wasn't bad, all things considered.  It wasn't great either, but there wasn't anything that made me throw my shoe at the TV, so that counts for something. 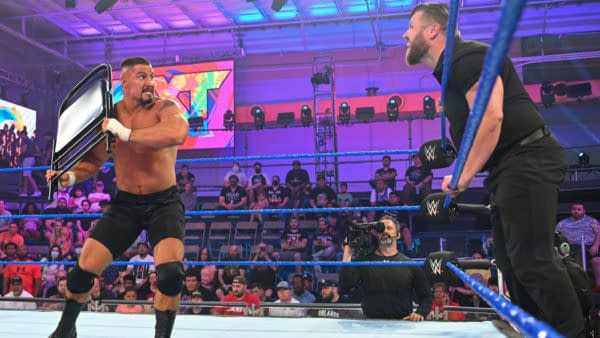 Review by Ryan Fassett
4/10
Not a bad episode this week, though a lot of the matches had odd finishes, and there was a bit too much silliness for my taste.

Our recap of this week's NXT 2.0 on USA, where The Creed Brothers put the NXT Tag Team Titles on the line for the first time.

While we knew it would be this summer, HBO Max has confirmed that Harley Quinn & Poison Ivy will return for Season 3 this July.