The Creed Brothers had their first NXT Tag Team Title defense and Bron Breakker seems to have found his next challenger for the NXT Championship.  Let's see what else went down on this week's episode of NXT 2.0 on the USA Network!

An ok match to start this week's show.  There is a bit of a clash of styles here and that leads to some awkward moments where they're working at different speeds and aren't quite comfortable doing what their opponent is trying.  The Creeds take this one without much doubt and shake their opponents' hands afterward.

We next go to the locker room to find a depressed Indi Hartwell trying to impart some wisdom on Cora Jade and Roxanne Perez.  She's whining about losing Dexter Lumis again (why are they still acknowledging this?) but the other two reassure her and they get revved up.

We then go to a diner to find Apollo Crews writing in a journal about his return to NXT, when he sees a big jerk at another table screaming at the waitress and intervenes.  This is a weird one, as we go inside Crews' head to see what he's thinking, which kind of destroys the narrative of everything else, which is supposed to just be a sports broadcast.  Yeah, they're getting weird down in Orlando…

These two are having a very solid match here, when Wendy Choo has to come down to the ring a ruin everything with her stupid nonsense on a bouncy thing and she throws confetti at Stratton, allowing Henley to get an Inside Cradle for the pinfall.  Awful.

Next, we find Cameron Grimes moping around backstage after losing the NXT North American title when he's approached by Bron Breakker, who tries to cheer him up.  Grimes isn't receptive, which brings over Duke Hudson, who talks Breakker into an NXT title match tonight.

We then get an obnoxious video promo from Lash Legend, who goes on and on about her high school and college athletic accomplishments… which all resulted in her being an incredibly lousy wrestler, so I don't know what that all matters.

A pretty short one here that again results in Lee going over on Quinn.  They just can't seem to figure out what to do with Quinn in NXT.  His character seems to change week to week and despite having a good size and being able to work decently in the ring, he loses a lot.

Next, we get a video package for Nathan Frazer, who tells us about his life growing up.  This dude is naturally very likable and could be a nice babyface for WWE if they do things right with him.

So we're getting Joe Gacy's hooded goons (The Dyad) in tag action here and wouldn't you know, they wrestle in those getups too. The crowd isn't buying it either and immediately chants "Take your hood off!"  With the exception of Wendy Choo, the Joe Gacy stuff is easily the dumbest thing in NXT 2.0 and that continues here.  You can't get past looking at two guys in hooded pajamas and take that seriously.  What's the harm in revealing their faces or at least giving them masks or something?  The hoods look dumb and they're spending a lot of time readjusting them and fidgeting with them, as I'm sure they can't see out of those things.

Anyway, they hit a double DDT move on Bernal to get the pinfall, so I guess this is a team we have to watch every week now.

After the match, Gacy cuts a rambling promo in the ring as the crowd chants "We want wrestling!"

Next, we go backstage to find Xyon Quinn having some words with Sanga.

We then get a video update from the injured Nikkita Lyons, who they say is returning soon.

Next, we get an interesting segment that shows NXT 2.0 is not live and is in fact pre-taped, as Tony D'Angelo and his crew head to the ring, including Troy "Two Dimes" Donovan, who was released by WWE days ago.

Anyway, Tony D promotes Two Dimes and Stacks to "soldier" status (Two Dimes' promotion didn't last too long I guess), before having Legado del Fantasma promise their loyalty to him.

Tony D then says it's time that he puts some gold around his waist, which brings out North American Champion Carmelo Hayes and Trick Williams.  Tony challenges Hayes for his title next week before they set up a tag match tonight between Hayes & Williams vs Stacks & Two Dimes.

We then get a backstage promo from Toxic Attraction, who taunt their opponents tonight.

This was a squash, plain and simple.  Breakker destroys Hudson in about a minute and pins him.

After the "match", Cameron Grimes heads out and cuts a promo on Breakker, saying he's undeserving of his success and that he got everything because of who his father is.  He challenges Breakker for his NXT title at Great American Bash and Breakker agrees.

Next, we go backstage to find Roderick Strong chewing out his team again.  The Creeds tell him they got him in a match next week and while Strong tries to get out of it, his bluff is called and he agrees.

We then go to a backstage interview with Von Wagner and his management, who all promise he will defeat Brooks Jensen next week.

The former Fabian Aichner makes his new character debut here, complete with an interesting entrance where he poses for still photos throughout.  He wrestles with a more cocky, flashy style now, but is still very impressive and looks like a million bucks.  He plants Raaj with a big Sitdown Powerbomb for the pinfall and in all honesty, he looks like a legit star now.

We then go to a backstage interview with Solo Sikoa, who says he still wants the North American title.  He's interrupted by Gray Waller, which leads to them setting up a match for next week.

We then find Edris Enofé & Malik Blade backstage trying to lift their spirits after their loss earlier, when they're confronted by Cameron Grimes, who lectures them on not being hungry enough for success.

After, Tony D rips into Legado del Fantasma backstage, telling them he expects better from them in his title match next week.

An alright match with a strange ending.  Jade hits a Senton Splash from the top rope and then tags in Perez, who just pins Dolin.  She appeared to be in a lot of pain and was saying something to the ref, so there may have been an injury here.

And that's that for this week's NXT 2.0, a big comedown from last week's very solid show.  This week felt very unfocused and had way too much odd stuff going on. 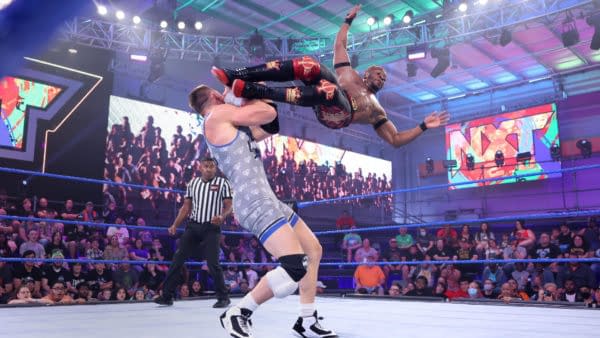 Review by Ryan Fassett
3/10
An unfocused and at times quite boring show this week. None of the matches were memorable and the other stuff going on just didn't really move the ball down the field too much or set up anything all that interesting.

Gene LeBell, "The Godfather Of Grappling", Has Passed Away At 89

"The Godfather of Grappling" Gene Lebell has passed away at 89, leaving behind an incredible legacy in wrestling, MMA, and Hollywood.

NXT 2.0 Recap 8/9: A New Challenger For The North American Title

Our recap of this week's NXT 2.0 on USA, where North American Champion Carmelo Hayes accepted a new challenge for his title at NXT Heatwave.

Our preview for tonight's NXT 2.0 on USA, where Tony D'Angelo and Santos Escobar will have yet another sitdown to discuss their issues.

Will Sasha Banks and Naomi make their WWE return to be a part of the WWE Women's Tag Team Title Tournament beginning Monday?

WWE SmackDown: Another Talent Made Their Big WWE Return Tonight

WWE SmackDown on FOX ended in an exciting way tonight with the shocking return of a big released former Champion.