Hey gang!  On this week's episode of NXT, love is on the line as Dexter Lumis battles Johnny Gargano for the hand of his longtime crush, Indi Hartwell.  Gargano is the leader of The Way (which of course includes Hartwell) and as such, doesn't want anyone involved with his longtime nemesis Lumis.  But is Gargano able to enforce his control over the faction by defeating Lumis, or is the power of love too much for "Johnny Wrestling"?  Let's find out!

We start things off with some tag team action as Top Dolla and Ashante Adonis take on Jaoqin Wilde and Raul Mendoza in a continuation of the feud between the two factions.

The match is very similar to what we've seen before between the four with a lot of the same beats.  What's worth noting is Top Dolla and Ashante look better each week, with Ashante, in particular, looking more and more adventurous in the ring and more confident with each match.

Lots of double teaming here as they try and keep Ashante from tagging in the big man.  Santos Escobar is also highly visible and involved at ringside as he distracts the ref and gets some cheap shots in when he can.

Ashante finally gets the hot tag to Top Dolla and he wipes out both opponents.  He hits a big side slam and goes for the running splash, but Escobar has seen enough and bashes him with a steel chair to get the DQ.

B-Fab wallops Wilde with a chair shot and Top Dolla dropkicks Mendoza and Escobar.  The chaos ends with Swerve hitting Mendoza with the JML Driver as Hit Row stands victorious in this round.

We now go to NXT GM William Regal backstage with Samoa Joe.  Regal explains that he has assigned a bunch of security guards around Joe to keep him and NXT Champion Karrion Kross apart until their match at TakeOver.

Next, we see Dexter Lumis in his studio, surrounded by his drawings, as he works on a picture of himself and Indi Hartwell together.

Total quick squash here.  Jiro tries some early offense, but Holland drops him with an Emerald Flowsion for the pinfall.

After, Pete Dunne grabs the mic and cuts a promo on how he, Holland, and Oney Lorcan are the three most dangerous men in NXT.

We now go to a backstage interview with Franky Monet, Jessi Kamea, and Robert Stone where Monet voices her anger over Stone costing them their match last week.

Lots of good back and forth action here between two guys that know each other well.  Fish lays in the heavy kicks and strikes early on, but Strong stops it with a heavy knee to the face.

Strong takes over with elbows and grapples, but Fish is game and is able to respond.  Fish keeps up the striking, but Strong hits backbreaker after backbreaker throughout the match.

Strong eventually hits Fish with the End of Heartache and gets the pinfall.

Next, we see LA Knight and Cameron Grimes preparing for their tag match in the locker room.  Grimes is shining Knight's boots while Knight questions if he can trust Grimes in the match, which he assures him he can.

Safe to say, @CGrimesWWE has @LAKnightWWE's back… and his shoes.

Standard tag action until Grimes tags in and Knight ditches him to fight the match on his own.  Grimes holds his own pretty well in what's now a handicap match, but eventually, two against one is too much and Grimes is hit with the Ticket To Mayhem and pinned.

After the match, Ted DiBiase comes to ringside to tell Grimes that he needs to find a way out of this situation.

Next, we have a video promo from Dakota Kai, where she unloads on her former partner, NXT Women's Champion Raquel Gonzalez.  Kai says she's only champion because of her and won't last as champion without her.  Hard to argue with her…

It's not a long match, but Baxter is able to hit a top rope 450 stomp to get the pinfall and move on in the tournament.

We now see how the semifinals look, with Baxter taking on Odyssey Jones next.

Next, we have NXT Women's Tag Champs Zoey Stark and Io Shirai at a sushi restaurant, as they try to get to know each other better.  Lots of goofy shenanigans here, but it's not particularly funny and is kind of a drag.  The segment feels at least a decade out of date, as they make all the tired jokes about sushi and chopsticks, even though sushi is one of the most popular foods in the country.

Indi Hartwell is interviewed backstage now, where she's asked who she's rooting for in the main event?  She doesn't give a direct answer and says she wants Gargano to accept Lumis.

NXT Champ Karrion Kross now storms to the ringside area and climbs on top of the commentary table, where he calls out Samoa Joe.  He tells Joe that he couldn't change anything when he was working with Regal and he can't now as a competitor.  Joe comes to the ramp like a madman, with numerous security guards trying to hold him back.  Kross runs away through the crowd, but Joe begins fighting the guards, eventually choking one out with a Coquina Clutch.

Dexter Lumis vs Johnny Gargano – Love Her or Leave Her Match

It's all Gargano to start as he whips Lumis around with arm drags.  They head outside, where Gargano suplexes Lumis onto the floor.  Hartwell runs out now to plead with Gargano, but he just heads back into the ring, only to eat a Lou Thesz Press from Lumis.

Lumis now crawls under the ring and Hartwell goes in after him.  Gargano and Candice LeRae grab her legs and drag her out, but she's holding onto Lumis and pulls him out as well.

Gargano beats Lumis around the ringside area, but as he heads back into the ring, Lumis plants him with a spinebuster and takes over.  They go back and forth with big moves for a while until Lumis tries Hartwell's springboard back elbow, which Gargano reverses into the Gargano Escape.

Lumis rope breaks out and Gargano throws him into Hartwell.  As Lumis checks on her, Gargano hits One Final Beat on the outside and then hits another in the ring for the pinfall.

After the match, Gargano and LeRae drag Hartwell up the ramp with them, but she turns on them and runs back to the ring, and makes out with Lumis big time in the center of the ring as NXT goes off the air for the night.

A fun enough show with a couple of good matches.  Not a ton of developments, but it was alright.  It was odd that there was no mention of Adam Cole and Kyle O'Reilly's feud after last week, but that may be a result of the news this week about Cole's contract situation.  We'll see! 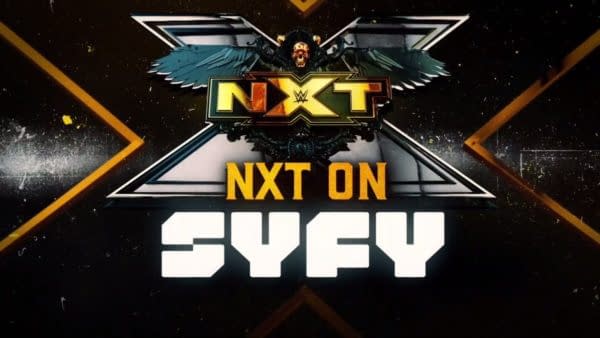 Review by Ryan Fassett
6.5/10
It was an ok night for NXT with some fun moments and some pretty good matches. I would have liked to have seen more story developments, especially towards the top of the card, but oh well.

NXT 2.0 Recap: Was Kushida Able To Retain The Cruiserweight Title?

The NXT Cruiserweight title is on the line and we are introduced to more new superstars as the NXT 2.0 revamp continues this week.

WWE & "The Plane Ride From Hell": When The Joke Stops Being Funny

After Dark Side of the Ring focused on the WWE & "The Plane Ride From Hell," we need to look at how we approach wrestlers' bad behaviors.

The NXT 2.0 era begins here with a big InDex wedding, the television debuts of new young stars, and a new NXT Champion is crowned.

Tonight is the dawn of a new era for NXT, as we will finally see the revamp, complete with a Fatal 4-Way match to crown a new NXT Champion.