In the NXT 2.0 era, the developmental brand is very rarely given "premium live event" time on Peacock.  Long gone are the semi-monthly TakeOver events and in their wake, we've seen the rise of these poorly-advertised named events on free TV, which just serve as a replacement for what would have been any other episode of NXT 2.0 on the USA Network.  This brings us to Roadblock, an event we were only informed of last week, but one with some matches of big consequences going into WrestleMania weekend's Stand & Deliver less than a month from now.  Who will be Champion then and what will the landscape look like?  Let's find out.

This one was filled with all kinds of silliness.  Choo and Kai brought their usual wackiness, but then Gigi Dolin and Jacy Jayne get involved by bashing Gonzalez's knee with a pipe at one point, which ultimately gives the wacky pair all they need to get the win and advance to the tournament finals.

We next get a backstage promo from Tommaso Ciampa ahead of his battle for the NXT titles tonight.

We then go to the parking lot, where The Creed Brothers are on the ground writhing in pain and surrounded by metal equipment (which I guess was used to beat them up?)

So Stratton and Henley are having a pretty lousy match until Sarray runs out and kicks Stratton, allowing Henley to get the win.

We then head to Chase University, where Andre Chase lectures his class about his match last week.

Next, we get a video of North American Champion Carmelo Hayes and Trick Williams in a barber shop, where they hype up his accomplishments and they say he'll face four opponents in a Ladder Match at Stand & Deliver and the opponents will have to qualify for the match.

And now to prove that WWE is actively trying to drive their audience away, we get a new Lashing Out with Lash Legend, fresh off of her injuring someone in the ring on last week's show.  She brings out Nikkita Lyons and they get into it insulting each other's bodies and yeah, I'd say the "women's revolution" is just about dead now in WWE.

We next go to a backstage interview with Imperium, where they claim innocence to what happened to the Creed Brothers earlier.  They're interrupted by MSK, who challenges them to a Tag Team Title Match tonight.

Then we head over to find Briggs & Jensen confronting Legado del Fantasma, accusing them of attacking the Creeds in the parking lot.

Halfway through the show and we finally get a decent match here.  They beat each other up pretty well, using trash cans, tables, and chairs to effect.  They explore the ringside area and work their way up to the scaffolding.  And yeah, Sanga gets involved.  Eventually, Waller knocks out Knight on the announce table and then puts him through it with a flying elbow from the turnbuckle.

He then climbs on Sanga's back to avoid the ten-count and win the match.

We now go to a video promo from Tony D'Angelo where he declares himself "the Don of NXT".

A nice match here with a lot of fast-paced fun action.  The highlight is easily when Carter gets Ray up on her shoulders for Catanzaro to hit a very high and dangerous Poisonrana from the top rope.  Ultimately, Ray hits Catanzaro with the KLR Bomb, followed by a top rope Moonsault from Shirai for the pinfall.

After the match, Cora Jade attacks Mandy Rose in her viewing area as revenge for earlier.

We then go to the locker room to find Indi Hartwell pissed at Persia Pirotta and Duke Hudson and yeah, this is all awful heavily scripted nonsense and they decide to face each other one on one to find out who's better.

A decent match here, even if it doesn't amount to anything in the end, as eventually the Creeds run in and destroy both teams.

We next go to the gym, where Draco Anthony is working out and is confronted by Joe Gacy and Harland.  Xyon Quinn gets involved and yeah, this is all silly and weird.

Next, we get a hype package for A-Kid from NXT UK, who will be making his NXT 2.0 debut next week.

Alright, so, the match itself is fine.  All three men here are good wrestlers and they put on a fine show here.  But it's the result that matters, so let's talk about that.  Ziggler pinned Ciampa to become the new NXT Champion here and honestly, that just doesn't make much sense.

By putting the belt on Breakker, it was supposed to be some kind of statement that a new generation has arrived and he'll lead the way.  By having him drop it only a couple of months later to a main roster veteran flies in the face of that.  Now I think we all assume Breakker will win it back at Stand & Deliver, but then it raises another question: why did the first run happen at all?

If Stand & Deliver is the brand's biggest event of the year, then something monumental should happen there, ala Breakker winning the NXT title for the first time.  It would have been even bigger if he'd beaten a main roster veteran like Ziggler for it.  But now, everything feels watered down and without much heft.  And that's been the problem with NXT 2.0 and WWE in general lately: shocking individual moments with little to no plan going forward.  And that's never good for storytelling and bad storytelling equals bad wrestling.

And that's that for NXT Roadblock, an overall speed bump that just disrupted everything going into Stand & Deliver for no particular reason other than to do it.  Gotta love that logic. 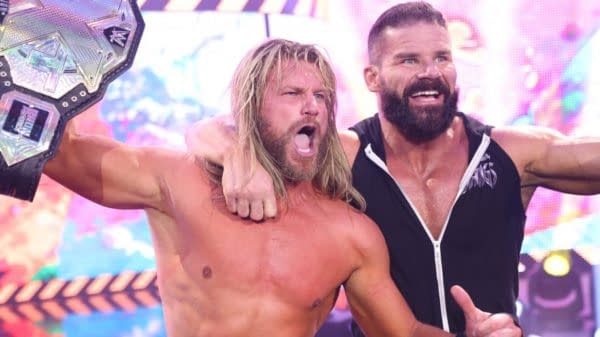 Review by Ryan Fassett
2/10
A couple of decent matches couldn't save this boring and silly event that's main goal seemed to be to make things more complicated than they needed to be.

My Hero Academia S06E18 "Izuku Midoriya and Tomura Shigaraki" was a fantastic episode to introduce the anime's upcoming final arc.

The Last of Us Season 1 Episode 4 Sees a New Threat Arise: Review

HBO's The Last of Us S01E04 deftly recreates Joel & Ellie's cross-country pilgrimage from the game while Melanie Lynskey's Kathleen shines.