Hey gang!  So WWE didn't promise much for this week's SmackDown aside from it airing on the cable boonies of FS1 instead of the prime network spot on Fox, so I guess that will help somewhat in that they won't be disappointing anyone with something they don't live up to.  Now even with zero expectations, there just doesn't seem to be much to make people tune in these days.  I mean hell, the only real drama to occur and get people talking last week wasn't even on TV.  Well, let's get to it, shall we?

Reigning SmackDown Women's Champion and number one locker room favorite among her peers Charlotte Flair hits to the ring to kick off the show.  She brags about being great and the best and all the things you can imagine she often says about herself in real life to cause an incident like what happened last week to occur.

She's cut-off by Sasha Banks, who gives her a reality check and says Flair isn't great and she instead holds the other women on the roster down (ahem…).  Banks continues that she wants a shot at Flair's title, but Flair says she'll instead offer an opportunity to someone who could use it.  Specifically, someone she's never faced before.

This brings out Shotzi Blackheart, who takes up Flair on her offer.  Flair agrees to a match with Blackheart where if she wins, she'll get a title shot and orders the match to happen immediately.

This was actually a nice showcase for Blackheart, who has been underutilized since her call-up to the SmackDown roster, after being a star in NXT.  She dominates much of the match here and gets close to securing the win, but Banks distracts on the apron, giving Flair the opening to hit Natural Selection on Blackheart for the pinfall.

After the match, Blackheart goes off on Banks, beating her all around the ringside area and eventually hitting the top rope Senton Splash on her to wipe her out.  Looks like a new heelish character for Blackheart here going forward.

We now go to a backstage interview with Jeff Hardy, who says he's happy to be on SmackDown now and wants a fresh start on the blue brand.  They're interrupted by Happy Corbin and Madcap Moss, who are quickly becoming WWE's worst angle.

Next, we have a video from SmackDown Official Adam Pierce from his home where he's recuperating from Brock Lesnar's attack last week.  He says that in addition to being suspended indefinitely (which Lesnar has written into his contract every year between Wrestlemania season and a massive payday at whatever Saudi Arabia show they're doing), Lesnar has also been fined $1 million.

We see that Paul Heyman is watching this on a monitor backstage and he's confronted by Kayla Braxton, who asks for his reaction.  Heyman gives a two-sided response.

Drew McIntyre hits the ring now and issues another open challenge this week, looking for another ass to kick.  This time, he's answered by Mustafa Ali, who promises to beat him tonight.

A very quick one here, though with something of a surprise ending in that McIntyre makes Ali tap with a Kimora Lock submission, something he's definitely not known for.

After the match, Ali grabs the mic and yells at the crowd, where he essentially says they boo him because they are racist, which is a half-truth.  They boo him because WWE is pretty racist and has always positioned Middle Eastern wrestlers as villains, so the crowd just follows that.

We now head backstage to find Hit Row already being used as a silly comedy act with King Woods and Kofi Kingston.

This is followed by Woods and Kingston heading to the ring, where Woods quotes The Golden Girls theme song and knights Kingston and proclaims that he is now "The Hand of the King".  Woods then pins a golden unicorn badge on Kingston's vest to seal the deal.

They are interrupted by The Usos, who are keen to resurrect their longtime rivalry with The New Day.  The Usos insult the New Day; the New Day insult the Usos; they end up making a tag match against each other.

This is one of the dumbest matches I've seen this year.  The ring is filled with Halloween decorations and pumpkins… need I say more?  Also, it appears no one on SmackDown creative watched NXT's Halloween Havoc this past Tuesday night, as there was the same name for the Women's Championship match on that show, yet it had none of this gimmicky schlock and was instead a pretty solid Hardcore match.

Moving on from that horseshit to some slightly less intelligence-offending horseshit, we go backstage to Sonya DeVille not trying to punch out Charlotte Flair, but instead and way less interestingly being asked about the upcoming match with Naomi and how she's going to mess with her this week.  She's interrupted by Sami Zayn, who rambles on about something, but some people cut him off and that's all they could come up with for him this week.

Before the match starts, DeVille enters and makes herself the special guest referee.

Naomi and Baszler fight, DeVille pulls the usual heel referee chicanery with not counting her pin attempts and fast counts the three when Baszler pins her.

After the match, Naomi gets in DeVille's face, but Baszler chokes her out from behind and that's that.

The New Day vs The Usos

A pretty decent tag match here by two teams that have more than enough experience against one another.  They all get their stuff in and do the back and forth dance until Woods gets a blind tag in and when Jimmy Uso tries pinning Kingston to no count from the ref, Woods flies in to roll him up for the pinfall.

And that does it for a remarkably lousy episode of SmackDown.  I guess WWE just threw in the towel on this one, as they figured they were on a shit cable network this week and no one cared, so whatevs. 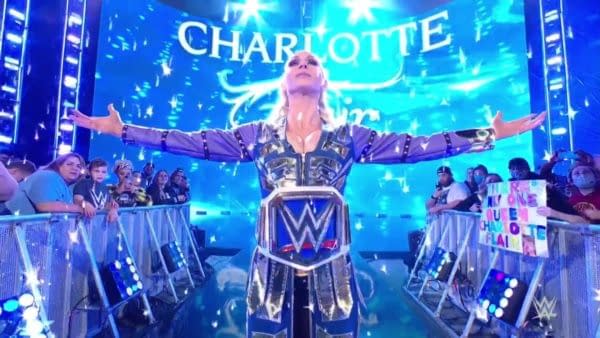 Review by Ryan Fassett
1/10
A truly awful night of WWE television here. No notable matches, no stars, and a stupid gimmick match to boot. This felt like a thrown-together house show with the B team at a local college venue. This was embarrassing and it almost took an effort to make an episode of SmackDown this bad. The one point I gave it was for Xavier Woods and Kofi Kingston trying their hardest to find a pulse on this D.O.A. episode.

SmackDown Will See A Tag Team Battle For The WarGames Advantage

Our preview for tonight's WWE SmackDown on FOX, where Sheamus and Drew McIntyre will face The Usos to determine the WarGames advantage.

A&E has more WWE Legends biography specials ready to air for the upcoming year, focused on seven new WWE superstars and their stories.

Our preview of tonight's episode of NXT on USA, where Wes Lee will defend his North American title against Carmelo Hayes.

WWE SmackDown: Will Sami Zayn Lay The Ucey Down on Butch Tonight?

Our preview for tonight's WWE SmackDown on FOX finds Butch and Sami Zayn colliding in a World Cup first-round match-up and more.

As Thanksgiving approaches, let's take a look back at how the classic King Of The Hill tackled the stressful holiday in some great episodes.

Doctor Who: Davies "Whoniverse" Could Include Daleks, Cybermen Series

Reports are that Doctor Who Showrunner Russell T. Davies may be eyeing "Whoniverse" series for the Daleks, Cybermen, and other "big bads."

Staged Series 3 Ep. 4 Swapped with Finale; BritBox "Looking Into This"

The new series of Staged, starring David Tennant & Michael Sheen, is not having a smooth launch on the Britbox streaming service.

Ronda Rousey successfully defended her Smackdown Championship against Shotzi at Survivor Series, despite some spirited ringside antics from Shotzi.

AJ Styles defeated Finn Balor in the second match at Survivor Series as the Good Brothers and Judgment Day battled in the crowd.