After a promising start to the spinoff anthology series (check out our recap/review here), AMC's Tales of the Walking Dead returns with its second stand-alone chapter, S01E02 "Blair/Gina" (directed by Michael E. Satrazemis and written by Kari Drake). This time around, Blair (Parker Posey) and Gina (Jillian Bell) find themselves trapped together as the city of Atlanta goes to Hell in a handbasket, forcing the pair to work together if they want to make it out of the city limits alive. So did it work? Here's a look at our in-the-moment recap/review to see if comedy can work in the land of the living dead…

Before the episode even starts, let me just say that I'm a huge fan of Posey and Bell's collective bodies of work. That said, this was the one episode from the teaser that left me feeling cautiously curious. But if you're going to have an anthology series that's looking to test the waters when it comes to genres and styles, you have to take a chance at a "beautiful disaster" every now and then.

Okay, I'm already liking that they're approaching it from the perspective of those who were looking to profit from the early days of the walker outbreak. And when you're an insurance company, fear definitely jacks up profits. Also, this is the kind of role that Posey particularly shines in, but Bell's already giving off a quiet but effective rage vibe. "Incentivizing nervous patrons" is a cruel line.

Damn, the scene where we just see the phone lines lit up and their faces while the sound of ringing phones gets louder was effective, and now we know in TWD terms where this takes place: "the CDC is freakin' next door."

So we see the "Swimming with Sharks" relationship that Blair and Gina have… and what's been happening to all of those Circle of Trust mugs.

Bell is doing a masterful job of portraying someone who was already on the edge personally & professionally, even before the walker breakout happened. And why did Gina have the shotgun in her car anyway?

Holy shit… now that's how you segue into the opening credits. As the four begin fighting over the shotgun and the gasoline truck, there's nothing like a horrific walker attack to pause the action… before the truck blows to smithereens.

Blair is a fascinating portrait of denial and projection, still throwing Gina under the bus than dealing with the realities around her. She has faith in a "system" she could never imagine falling apart (nice use of Patsy Cline's "Crazy" there).

And we're having a Deja Vu moment… and Blair is understandably losing it. We're back at the convenience store, but it looks like Gina also realizes she has been through this before. Hmmm… So Gina's got the gas… at least until Blair screws that up. Looks like we're headed to another round… (and the dialing back on any direct humor is working nicely).

The way Blair and Gina approached addressing if this is a dream or if they're dead felt real, and Gina running from Blair made perfect sense in the context of the swirling "Groundhog Day" walker hell they're in.

Let me break for a second to say that this is not the episode I was expecting, and I'm loving it (so far)…

So clearly, the convenience store scenario is a "fixed point" (pardon our Doctor Who) since Gina keeps finding her way there.

I'm fascinated how each go-around seems to be bringing the two closer together, as Blair proves herself less and less selfish while Gina begins coming out of her shell and using her rage to their advantage. So we have Blair on the hood of the truck and Gina now in control by getting behind the wheel… only to get bit by a walker?!? Oh well, looks like another go-around…

I'm a big fan of how Posey and Bell are pulling off this intense face-off as if no one else was in the room, as if they were vibrating at a tune that's slightly off from everyone else's. And once again, Bell nails that monologue ripping Blair to shreds by coming at it from someone who realized a long time again that they had nothing to lose. In that sense, the walker outbreak becomes almost a release (in a weird way). And with Blair's response, she proves Gina's been right about everything.

After Blair attempts to have Gina arrested before the accident can happen (it does anyway), we see a montage of all the times they've had to repeat the accident over and over again as the two basically went to war with one another.

As I mentioned earlier, the time loop has bonded Blair and Gina as they eat snacks and compare notes from all of the times they've run through it. That conversation in the bathroom is awards-nomination worthy for so many reasons… like when Posey won't look at Bell when she says that they won't be friends. Definitely a punch to the feels.

But Blair grants Gina her wish by staying in the car and letting her drive off in the gasoline truck. Now, Blair is admitting that things are getting bad and urging her staff to leave- apparently, finally accepting the truth.

"And time? We just don't have enough of it to do the wrong thing." – a wonderfully powerful line by Blair, pretty much summarizing one of the TWD universe's core themes. And then Blair allows herself to be bitten only to…

Be back at the office with Gina… but things have changed as Blair apologizes to Gina while owning up to all of her past abuse. After finally opening up to one another, they tease a plan to try something different this time…

Once again, we see that sometimes society has to be torn down to get people to let down their walls. Those silver linings in the midst of a growing nightmare. These sharing moments elevate their characters from the cliches that they could've been in lesser hands, but the quality combination of impressive acting, writing, and direction elevates their reliability. We're not just watching them but also feeling for them.

Oh wow. I think we're seeing what Blair and Gina have been working towards this entire time, why the tankard mattered. They were able to create a fire line to protect innocents from a walker wave. And though the tankard blew… Blair and Gina made it to 5 o'clock! And as they "debate" if Blair shared her personality disorder, we're left with two new survivors who were put through some kind of cosmic test to see if they could survive the world ahead. And now that they proved that they can, here's hope we get more of them in the future. 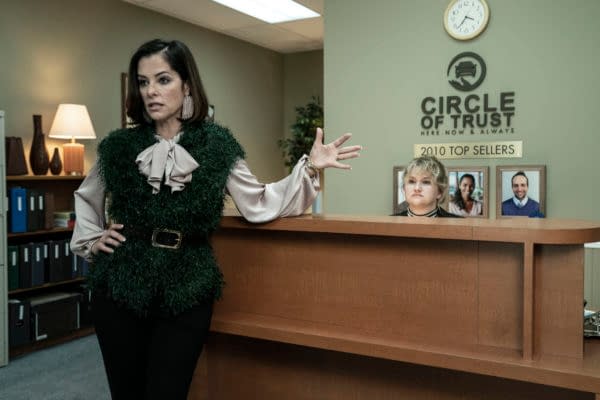 Review by Ray Flook
8.5/10
After a promising start to the spinoff anthology series (check out our recap/review here), AMC's Tales of the Walking Dead returns with its second stand-alone chapter, S01E02 "Blair/Gina" (directed by Michael E. Satrazemis and written by Kari Drake). This time around, Blair (Parker Posey) and Gina (Jillian Bell) find themselves trapped together as the city of Atlanta goes to Hell in a handbasket, forcing the pair to work together if they want to make it out of the city limits alive. Between Posey & Bell elevating their game to nomination-worthy levels to spot-on dialogue and direction from Drake & Satrazemis, we have an episode that stands on its own in some very unique ways while also opening another very interesting door to the TWD universe.

Nothing like a look at a "Hargreeves Family Reunion" to signal that filming is officially underway on Netflix's The Umbrella Academy Season 4.

Tom Brady may be retired, but don't plan on seeing him on FOX Sports covering the Super Bowl this weekend like some may have thought.