The Falcon and the Winter Soldier episode one isn't the genre game-changer that WandaVision was, but it does do a pretty good job of setting up what this series is going to be about and what themes they are going to be addressing. If there is a black hole that is missing from the Marvel Cinematic Universe, it's what happened after the Blip and what happened after they fixed it and all of the people came back. Spider-Man: Far From Home explored it a little, but WandaVision was a more internal journey for one of the title characters. The Falcon and the Winter Soldier is looking to attack the idea of integrating into a new world head-on in a very interesting way.

That integration comes in the form of both the main characters going on various different person journeys, and this first episode sets them up. Sam Wilson (Anthony Mackie) isn't a soldier anymore, but he is an Avengers, which is a form of the military. He's doing his best to keep the peace in the world very much in the same way Tony Stark attempted to as well. Sam is both a soldier, a comrade in arms but also a civilian just trying to do his best to help. He's both and neither.

While WandaVision was the exploration of Wanda's grief, it appears that The Falcon and the Winter Soldier will look into the trauma of Bucky Barnes (Sebastian Stan). Bucky is a man out of time and a man with a lot of guilt to carry on his shoulder. As he said in Captain America: Civil War, when Steve tried to absolve him of what he did and that he didn't have a choice, Bucky replied with "I know…but I did it." Bucky has been a side character throughout most of the movies so far, but this series is going to show him working through the trauma of what happened to him at the hands of Hydra. Much like Sam, Bucky is also a soldier that is now a civilian, and he is trying to find his place.

The place where their stories find common ground is that they are both trying to integrate back into a world that kept on spinning when they were gone in the Blip. Bucky is a man out of time in many different ways, but Sam had people that he left behind, and they are both having a hard time coming to terms with that. That common ground is going to make their dynamic more interesting, and that plus the concept of legacy, both good and bad, is going to be the themes that appear to be hovering over this pilot and likely the series.

The episode starts off with a bang and one of the best solo action scenes we've ever seen from Sam Wilson as Falcon. It's clear that this is a more conventional series in terms of genre, but that is in no way a bad thing. It's clear why this was the series that Marvel initially wanted to kick off the Disney+ series with. The gamble of WandaVision ended up working out, but it's quite clear why The Falcon and the Winter Soldier was the harder series to shoot. In the first episode alone, we jump between multiple locations and countries, which would have been hell to try and shoot in a COVID world. While this might be a little easier for more casual fans to jump into, the ideas they will be exploring are looking just as interesting as WandaVision.

While it's hard to ultimately tell if The Falcon and the Winter Soldier is going to work entirely as a series from the first episode, but there is enough going on that your interest is absolutely piqued. The concept of finding your place in the world that both of our titular heroes share and exploring a post-Blip world is going to make this a fun series for Marvel fans to watch. Will it be enough to convert new fans? It's too early to tell, but it could be.

The Falcon and the Winter Soldier: Episode 1 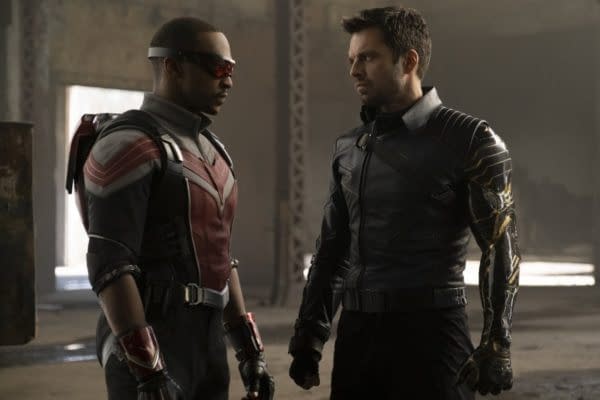 Review by Kaitlyn Booth
8.5/10
While it's hard to ultimately tell if The Falcon and the Winter Soldier is going to work entirely as a series from the first episode, but there is enough going on that your interest is absolutely piqued.

At CCXP 2022 in Brazil, Crunchyroll announced eight new anime series coming in 2023, including The Fire Hunter, My Home Hero, and more.