Aliens, summer camp, poop, pee, and more were included in the fourth episode of the second season of FOX's The Great North, and it was an odd yet lovable way to see the Tobin family connect through storytelling. Beef Tobin is set to pick up a longtime friend, Delmer who is an adorable 80 years young man, of his from the hospital after a slight accident after some yummy soup.

Poor thing got a concussion, so the Tobin family is set up with the task to keep him up for a certain period of time, can't go right to sleep in his condition. So, they all decide to retell stories their dad has told them of his adventures in the past with Delmer, who is voiced by Aloysius Hootch.

Not only was the voice actor incredible in their role, I mean they have been for episodes now, but it also incorporates something important into The Great North setting, Alaskan Indigenous communities. A small but important point came up when Judy asked Delmer how to say "poop" in Yup'ik. While it may seem like a throwaway line, it signaled the way the Tobin family surrounds themselves with those who would rightly know the land and culture before they ever could. I'm incredibly happy to see the inclusion of indigenous characters and more as the series continues on in this second season.

It wasn't the best episode out of the amount we've seen so far this season, but it did something really well with how it included the stories of adventure to explore Beef's character in new ways even if comical in nature. A lot was conveyed about the important pieces in our lives that can come with unconventional friendships or relationships. This one obviously shaped Beef in many ways, and it's hilarious to see his kids mistake his age over and over again with the story descriptions. Toilet humor made its' debut and in the best way possible on The Great North. 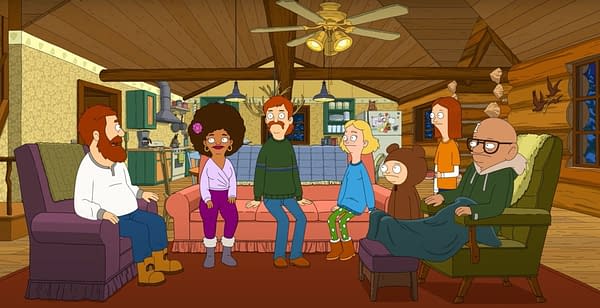 Review by Brittney Bender
9/10
The Great North did an excellent job at establishing a fun look at Beef Tobin's younger years while also bringing in important figures like Delmer to offer his Indigenous background perspective.
Credits
Network
FOX