So it turns out that at the end of the day, we might just be pretty lousy friends. And that's just one of a ton of takeaways from this weekend's powerful Jon Amiel-directed & Magali Lozano-written episode of AMC's The Walking Dead, "New Haunts"- but we'll get back to that in a minute. Heading into the tenth episode of the long-running series' 11th and final season, viewers were left with a ton of question marks that needed to be addressed. We know that Lance (Josh Hamilton) made an offer to Alexandria to either join the Commonwealth or stay in Alexandria as the new community helps to rebuild it. Six months later, we see that Maggie (Lauren Cohan) stayed with Alexandria and Daryl (Norman Reedus) moved to the Commonwealth- and they didn't appear to be on friendly terms with one another anymore. This week, we dial back the clock to about a month after Lance's offer was first made. So who made the move and who decided to stay? Just how perfect is this new "perfect society"? And how did any of this tie into the future of The Walking Dead universe? To touch upon any of those, we're going to have to throw on the official "MAJOR SPOILERS AHEAD" sign and drop an image spoiler buffer before we do a deep dive into "New Haunts" and throw some wood onto "The Dumpster Fires of Random Speculation."

So there wasn't much to not love about the lives that some of our familiar faces were beginning to carve out for themselves in the Commonwealth. Daryl has a stable environment for Judith (Cailey Fleming), RJ (Antony Azor), and Dog, while going through Commonwealth basic training with Rosita (Christian Serratos). Carol (Melissa McBride) and Ezekiel (Khary Payton) are seemingly reuniting, and Carol being Carol appears to be working to her advantage when it comes to Lance. Judith is making friends, beginning to embrace being a kid, and even making Daryl proud with her taste in Motorhead (with great use of their music towards the end of the episode). And things seem to be coming along for Princess (Paola Lázaro) and Yumiko (Eleanor Matsuura), too. Every reason to be happy for them, right? Then why aren't we feeling that way?

Okay, we're looking at this on two levels. When it comes to the show, it's hard to watch our "family" having to give up parts of themselves for a "new society" that isn't looking much different from the pre-zombie apocalypse one. That was never more evident than by how much we wanted to reach through the screen and strangle Sebastian (Teo Rapp-Olsson, who's been brilliant in the ways he's presented us with someone we need to hate) when he was disrespecting their historic weapons. We see them being domesticated, which is actually the endgame that we want for them. But in doing so, we want to maintain their pride and honor. Their time in the apocalypse and the battles they fought should be remembered and honored. Not pushed aside as they're reprocessed, classified, and moved along to be just another cog in a familiar machine. "Meet the new boss. Same as the old boss," indeed. But after everything they've been through, are we being too harsh & judgmental? After all of the talk over ten previous seasons about fighting for something, could this be that "something" even as imperfect as it is? Are we being "lousy friends" to them because we're more concerned with what we want for them as opposed to what they want for themselves?

It's also a feeling that translates to the show nearing the end of its run after over a decade on the air. Because as much as we love our shows and what them to shuffle off the programming coil the best way possible when the time finally does come? It always feels "too soon." And that's what hit us emotionally about Amiel & Lozano's chapter. It created a vibe that not only was a new chapter beginning but that this is truly the final gauntlet for our survivors. By presenting our "family" going through so many changes on-screen, we were forced to confront things like the fact that there will never be another season premiere of the show ever again and that filming wrap on the series is now most likely only a few weeks away. And as much as we wish the cast and crew well and look forward to what their futures have in store, we don't want them to go. We want them to stay… for just one more episode… for just one more season. So while that might make us "lousy friends," we're lousy friends with a heart.

RANDOM THOUGHTS: Some of the threads that caught our attention during S11E10 "New Haunts" are worth keeping in mind, beginning with this quote from Daryl: "Always something you gotta do to make it work." From there, our hearts broke a whole lot when Ezekiel gave away Shiva's collar. Major "Mr. Mom" props to Daryl for taking on the "single dad" role with Judith, RJ, and Dog (with bonus points for how he handled the allowance & the record player moments). Rosita to Daryl about Sebastian: "Wow. He hates you. That was a hate smile." And last but far from least, Mercer (Michael James Shaw) and Princess instantly became the show's power couple after their sexy exchange on the red carpet line, that move Mercer did with the velvet rope, and how Mercer handled that dude disrespecting Princess.

"The Dumpster Fires of Random Speculation" I: Okay, when it comes to our earlier theory that Daryl would take the bullet that would lead to change in the Commonwealth (like Rick did in the comics)? Well, considering how much Sebastian loathes Daryl and Daryl's growing need to make the Commonwealth work, we're starting to lean toward that a bit more than about a month ago. We can't help flashing back to Daryl looking at the historical mural in the subway tunnel and his learning how society fell apart because this episode seems to clue us in on just how impactful that moment was to him (and Judith & RJ wanting to stay making his decision a little easier, too). Granted, that would mean that reports of a "Daryl & Carol" spinoff would've been red herring, but if it helps cover the reveal and can be replaced by something comparable, you never know.

"The Dumpster Fires of Random Speculation" I: So we all agree that there's no way that CRM and the Commonwealth wouldn't know about each other, right? So here's something we're throwing out there. While CRM is clearly a much larger operation, could Laila Robins's Governor Pamela Milton be the key to why the Commonwealth is able to grow and thrive? One way of thinking about it is that Milton comes from a ton of political influence, which she wields as did her father, husband, and uncle as we've learned. Does she have the kind of access that would make making nice with the Commonwealth in CRM's best interests? Or could the Commonwealth be some kind of societal "side project" that's more directly connected to CRM than we might be thinking? Right now, I don't think there is any question that the Commonwealth is getting larger support from someone somewhere to be able to maintain life the way that they do. Could CRM be their "silent partner"… and what happens when they don't want to stay silent any longer? One last thing? That end scene where Rosita finds the satellite HQ for the resistance includes a ton of propaganda materials, with one image in particular (see above) featuring an image that doesn't look so much as a Commonwealth soldier as it does a CRM helicopter pilot. 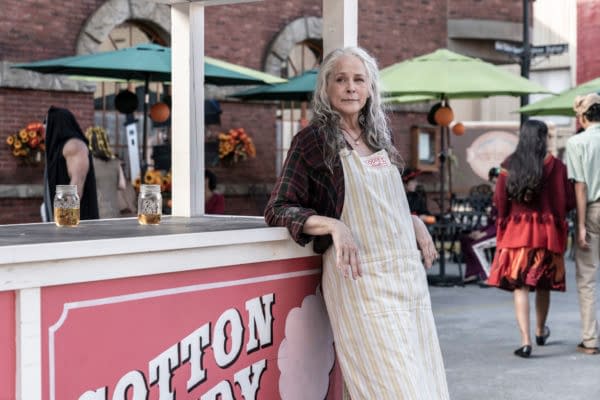 Review by Ray Flook
9/10
So it turns out that at the end of the day, we might just be pretty lousy friends. And that's just one of a ton of takeaways from this weekend's powerful Jon Amiel-directed & Magali Lozano-written episode of AMC's The Walking Dead, "New Haunts." This week, we dial back the clock to about a month after Lance's offer was first made to Alexandria. So who made the move and who decided to stay? Just how perfect is this new "perfect society"? And how did any of this tie into the future of The Walking Dead universe? Here's a look at our review of S11E10 "New Haunts."

In today's BCTV Daily Dispatch: The Boys/"Herogasm," AEW/NJPW, Derry Girls, Secret Invasion, What We Do in the Shadows, Three-Body, & more!

In today's BCTV Daily Dispatch: The Boys/"Herogasm," AEW/NJPW, Derry Girls, Secret Invasion, What We Do in the Shadows, Three-Body, & more!